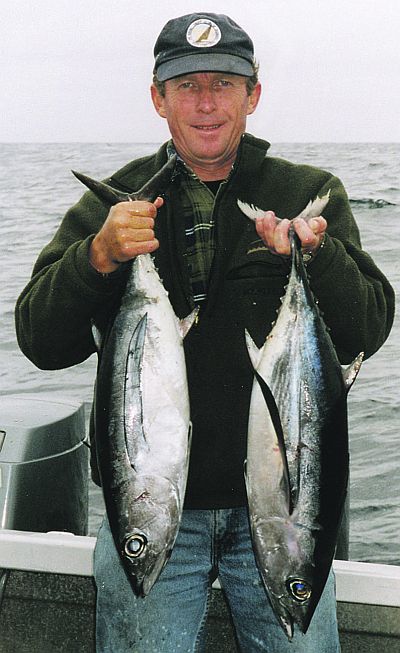 By Matt Byrne
During the months of February – April, Bicheno is home to some great offshore light tackle game fishing action. Here, Matt Byrne gives readers some inspiration to tackle with one of his favourite fish – the Albacore tuna at a very popular holiday location.

Bicheno – a fish rich water
The east coast town of Bicheno is located right in the heart of Tasmania’s east coast, approximately 2.5 hours drive from Hobart, and closer again from Launceston. The area offers a huge range of accommodation options and of more importance to fishers, it has a very good launching ramp at the Gulch which is suitable for all boat sizes and is sheltered from all sorts of weather.
Although it is a popular town for holiday makers, Bicheno is truly famous for being one of the best temperate water diving locations in the world due to the great diversity of inshore reef systems, fish and other marine life that exists there. It isn’t difficult to understand why the fishing can be so good.
All keen game fishers know that if there are good numbers of baitfish congregating in any one location, then the larger predatory fish such as Tuna, marlin and sharks won’t be too far away. Such is the case off Bicheno and between the months of February and April where the east Australian current pushes down the coast and feeds this already fish rich area with warmer water temperatures and even more feed for game fish including sauries and squid.
Like most of Tasmania’s east coast, Bicheno offers fishers a chance at all Tasmanian game fish species throughout the course of the game fishing season but it is the albacore that we often find ourselves choosing to target for the great light tackle sport that they offer , their abundance and their fantastic eating qualities.

Caring for your catch and eating
Any fish we catch and intend to eat needs to be treated accordingly – it doesn’t make sense keeping fish if you don’t care for them properly. Albacore are no exception and if cared for immediately after being caught, will provide you with a lovely meal for you and your family.
Once an albacore is boated, bleed the fish immediately. This is best done by inserting a knife into either side of the fish just near the pectoral fin, allowing a clean kill and the fish to bleed properly. Once complete, the fish can be filleted and put on ice.
Albacore or ‘chicken of the sea’ as it is appropriately known, can be cooked a number of ways. My preferred way is to remove and discard the blood line from each fillet and then cut the flesh into small chunky strips. Once you have done this, roll each piece into egg and breadcrumbs and cook quickly on a hot pan. Serve on a plate with chips, salad and some tartare sauce. This is a quick, simple and unbelievably tasty way to prepare albacore and one that both guests and the family will enjoy.

Get out and enjoy it!
With the upcoming game season not too far away, consider a trip out of Bicheno chasing the hard fighting and tasty albacore. There are a host of other species available for the game fisher including good numbers of Mako sharks for those who enjoy chasing the toothy critters. A few seasons ago we had the privilege of seeing 2 Marlin so far and although we haven’t managed to tempt a hook up on either occasion, it has without a doubt opened up my eyes to the fishing potential that this water has to offer.
So there you have it there are no excuses, hook the boat up and take the family to Bicheno this coming game season. I trust that you will enjoy what the area has to offer. 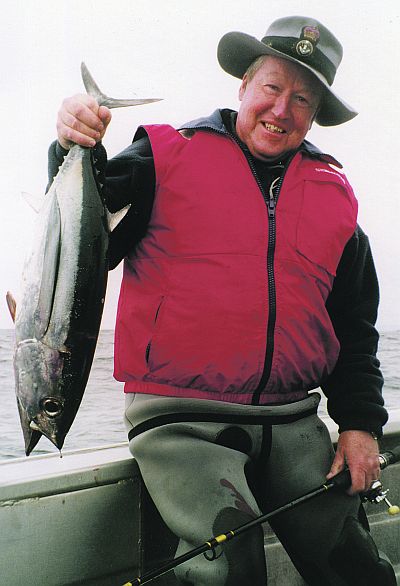