One trout out of three, not good

Fine sunny weather, hardly a breeze and lower river levels gave me the opportunity to head to the upper reaches of the Mersey River at Weegena for a couple of hours of spin fishing. On my arrival (11:05 am) I found it was running a little higher than I thought it would be, good thing was it was still at a safe wading height. The water was a nice light/medium tannin colour and the water temp was sitting on 4-5 degrees which was much better than the two degrees on my last trip here. My main concern was if the trout were here and are they here in good numbers yet, or is it going to be one of those fish-less days that happens more often than not early in the season.

With the water temperature still being on the low side I wasn't feeling all that confident how the session would go this morning. The first five minutes of casting the Mepps #1 Aglia Fluo rainbo spinner up and across the medium flowing river didn't draw the attention of any trout. It wasn't until I moved into a small section of river to the left of me, a shallow piece of water that has given up trout several times in the past. Close to the river bank there's a large cluster of dead wood and that's the area I've picked up trout from before, that's exactly where I lobbed the spinner. No sooner had the Aglia fluo hit the water it was taken by a medium size trout, it was fish on.

This brown played up for a short time making several leaps from the water before tiring and I had it in hand. This brown was my first Mersey River trout of the 2020/21 trout season as well, a quick photo and it was back in the water. The next cast was two meters to the left of where I had caught the first trout of the session, like before the spinner had no sooner hit the water it was taken by a small trout. This one didn't stay on, two leaps from the river saw it part ways with the spinner. With two hook ups with one trout landed in two casts I was starting to think this was going to be a good spin session on the Mersey.

Three meters to the right of where I had caught the first trout was a nice little head water that had a small piece of flat water close to the river bank. That was another top area for a trout to be sitting in wait for a feed to come to past it. My first two casts dropped a little short of the flat water, the third one didn't, it landed in it. As I retrieved the spinner I could see a medium size brown sitting right up behind it, a light twitch of the rod was all it took for the trout to take the lure. It wasn't a real aggressive take either, it just took the spinner when the blade fluttered after I twitched the rod, no sooner had it taken the lure it was gone. One solid head shake was all it needed to drop the lure, it must have only been lipped.

Three trout hooked in the one small shallow stretch of water is something that doesn't happen all that often in a large river, let alone within four meters of each other. I was feeling pretty disappointed in losing two of the three trout, had I caught two from three would have been more to my liking. I still had plenty of good water ahead of me and I was still having positive thoughts that I'll catch and release a few more before my day is done. I reckon I had fished around forty meters of water with no signs of a trout before I finally had a follow from a small/medium size brown. There wasn't any aggression shown from it so I went for a change of lure, it was on with a March Brown Bug spinner. The reason I chose the March Brown was mainly because the river was in full sun and I was in knee deep light tannin water.

The duller colour of the March Brown spinner may now be more enticing to the trout than the brighter coloured Aglia Fluo spinner. I continued fishing my way upstream without having a follow from a trout, all I managed to do was spook a couple of small browns as I battled along the slimy rocky river bottom. I came to a deep medium flowing stretch of water where I tried a brown trout pattern hard body lure for ten minutes, not a sign of a trout was had in it. Another change of lure was had as I moved into the faster flowing water, this time it was the Mepps #1 Aglia Furia, a great all round lure that works well on the trout throughout the trout season.

Fifteen minutes on and still no signs of a fish, even with some nice stretches of river ahead of me I knew I was wasting my time going on, it was time to call it a day. With just the one trout caught and released wasn't what I'd call a good spin session at all, in fact to me it was a real fizzer of a session. The river bottom itself still doesn't look in very good condition to me, it's still covered in a brown slime, heaps of water weeds & plenty of silted areas in most stretches of water. It really needs a good flood to clean it out, but that won't happen due to it having two HydroElectric Dams on it and a regulated flow rate which isn't enough to flush the river system. 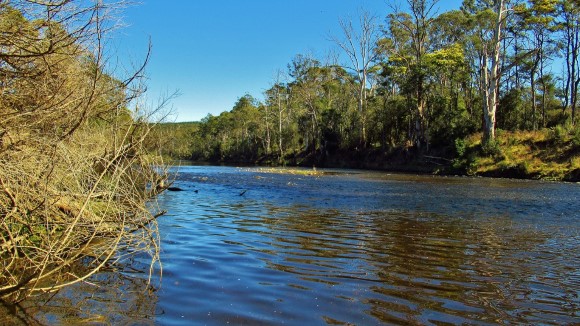 Beautiful day to be in a river 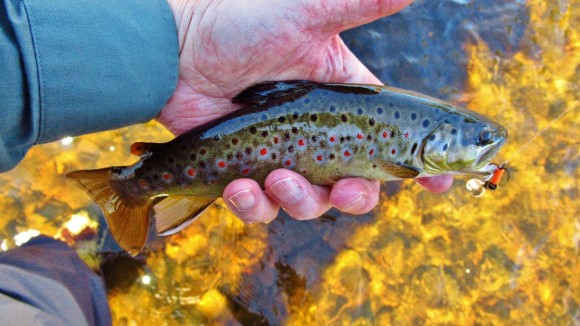 First and only trout taken 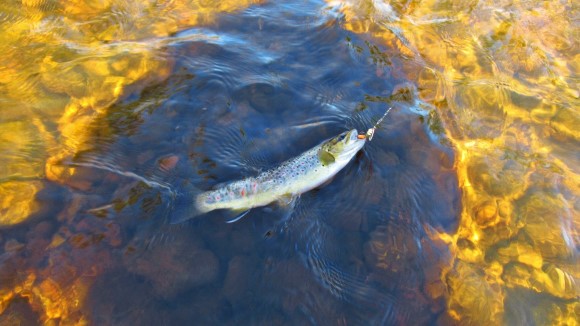 The one and only trout caught today 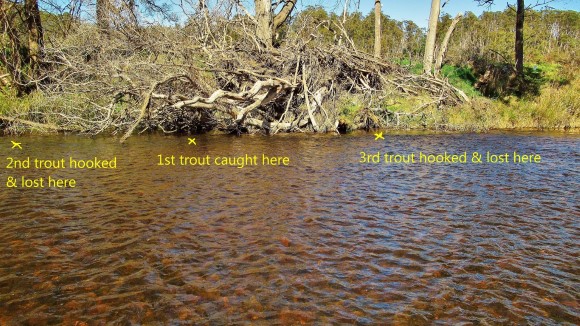 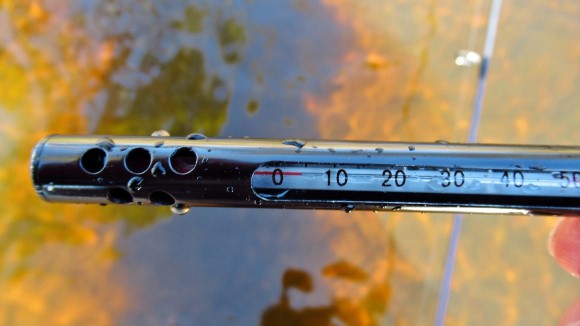