Wild browns and 'bows on the Bug

Rain,hail and cool conditions were forecast today, after having a 11:15 am doctor's appointment it was a late start to the day for my planned spin session in the upper Mersey River. On the way to the river there was quite a lot of weather moving in, very low dark rain clouds weren't all that far off from where I was heading. When I got to the river there was already someone in it fishing their way upstream so I headed to another stretch of river a couple of kilometres further upstream, a stretch of water I haven't fished for around 5 years. No sooner had I arrived (12:50 pm) I only had time to put on the wading gear when heavy rain & light hail arrived, all I could do was sit in the car and wait for it to pass. After a twenty minute wait it had passed and I was out of the car heading down to the river.

I could see mist drifting across the top of the water which meant the water temperature was warmer than the air temperature that was sitting at nine degrees. With it being so dull I started off using a #0 White Miller Bug spinner, after a couple of minutes with no signs of a trout it was swapped for a #1 Stone Fly Bug spinner to see if that may attract a trout. There was a good fast run of water close to the opposite river bank, perfect water for holding rainbow trout and great for my cast & drift with the spinner. The first cast was into a narrow flat water close to the river bank, I did slow retrieve until the flow picked up the Stone Fly bug and I let the spinner drift with it. When the lure was half way in it was taken by a nice medium size (320 gram) rainbow trout, after a short battle the first fish of the day was landed.

I continued to fish the fast waters as I moved upstream where I had a couple of hits & misses, fifty minutes on (2:15 pm) I finally had another hook up, this time it was a solid brown that took the Stone Fly spinner. It was taken in a fast flowing stretch of water that was perfect for casting & drifting the Mepps Stone Fly Bug spinner. There's nothing better than watching the spinner drifting with the flow and seeing a trout come up behind it, a light twitch of the rod tip is normally all it takes to get the trout to take the lure. Looking behind me I could see another build up of very dark clouds moving in and with some nice stretches of fast water ahead of me I had to get a hurry on. The river bottom here was in very poor condition as is most of this river, it was also very slippery under foot making the hurry on slower than I liked.

I could see a little flat water near the opposite side of the river, a long cast up and across the river I lobbed the spinner right in the middle of it. With the visibility being so dark now I couldn't see the Stone Fly spinner as it drifted with the flow, not that it mattered because the spinner was hit hard and fast in no time at all. A nice rainbow had smashed the bug spinner and taken off in a rush, it made several leaps and runs before tiring and I slipped the net under it. This trout was in top condition and went 395 grams, it was photographed and released back into the river.

With the weather closing in by the minute I was fishing my way upstream as fast as I could, the next fast water run gave up the brown trout of the day, like the other fish it was taken on the cast & drift. It too was in beautiful condition, a solid 425 gram fish that was soon back in the river after a quick photo. Ten minutes later I caught and released a small rainbow, this one I didn't bother to photograph seeing it was a little fish, it was released straight away. I had reached the end of the fast water runs and decided it was time to head back to the car before the rain arrived. With five trout caught and released in two hours was much better than I had expected it to be seeing as this area is fished on a regular basis. On the walk back to the car two other vehicles had already arrived with a few trout fishermen in them. No sooner had I hopped in the car to leave the heavens opened up, I couldn't have timed it better. 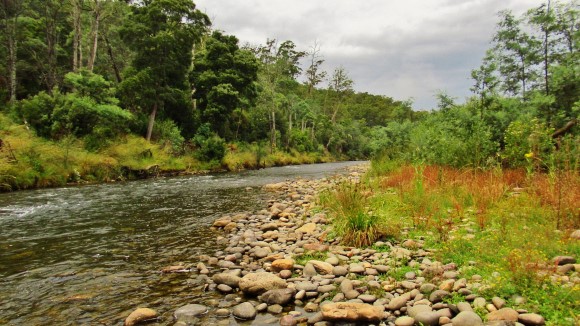 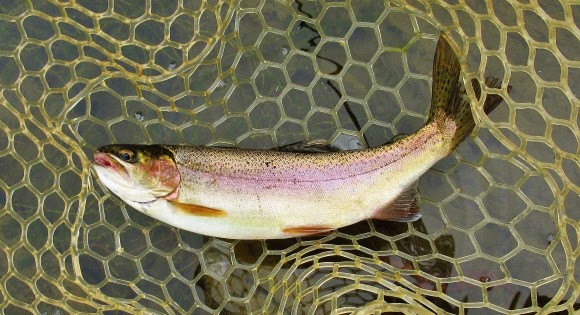 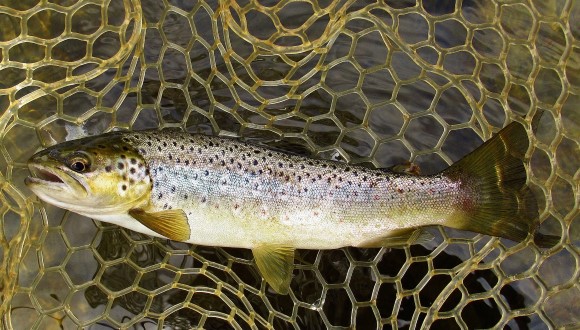 One of five browns caught and released 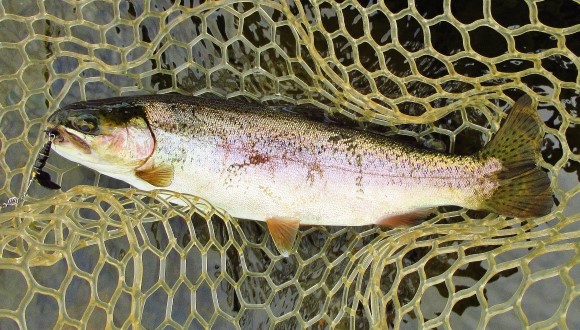 The best rainbow of the spin session 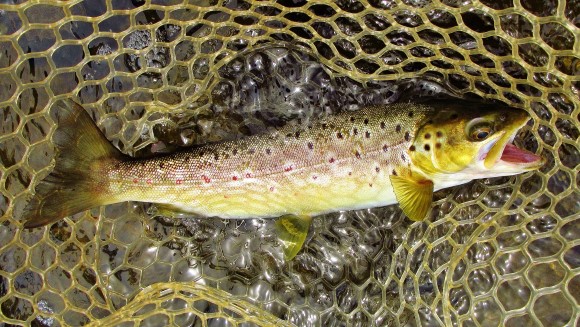 The first brown trout of the day 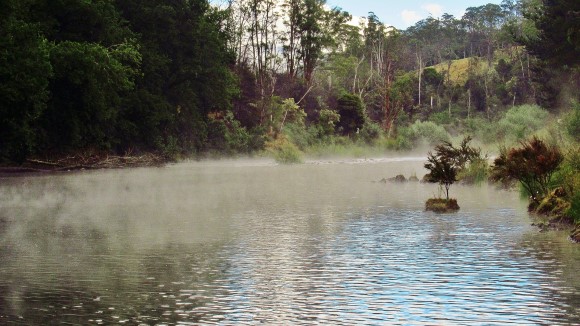 Water temperature is warmer than the air temp