The Meander River fished well, but all small Brown Trout

The Meander River fished well, but all small Brown Trout

With the wind coming from a variety of directions today I headed on over to the Meander River for a spin session. I arrived there at 1.20pm much earlier than I would normally hit a river, but I new the area I was going to fish would have good shade along most of the 1.5 kms of river from thick vegetation along the river banks. On my arrival I found the river was running around six inches higher than my last trip here as well. It just meant that some of the areas where I cross over will take a little longer than they normally do due to the stronger flow.

The first long run of medium flowing water didn't give up a sign of a fish and I thought it's going to be another one of those days here. My last trip here only yielded 4 small browns and the loss of a very nice rainbow that ruined my day. But that was the last trip, this is a another trip and who knows how this will end as I've only fished the first run at this stage.

The next section of river was much faster flowing and had some very good medium sized pockets of still water on the opposite river bank. Well my second cast into one of them and I had an instant hook up, the first brown for the day. It wasn't too long before I had this brown in the net and a quick photo and it was on it's way. It wasn't a big fish either as it only went 320gms. Then in five casts I had hooked three more small browns only to land one of them as the others tossed the spinner after several leaps from the river.

Still it was a good sign that there were a few fish around in this run of water. I kept on working my way upstream for the next 200 meters and caught and released two more small browns from five hook ups. These little fish were really in an aggressive mood today that's for sure and they were full of fight too. Even though these were small fish, they're river fish and they always put up a good fight in the fast water. Those lost were the same as the others, all of them tossed the lure. I had now reached the top end of this stretch of river and ahead of me was a real deep run of water and so it was time to get out and move onto my next area of the Meander.

After a short drive I was now at the other run of the Meander that was also well shaded by the vegetation. Once in the river it only took two casts before I had a fish on, another small brown.

The wind was still coming from every which way making casting a little on the difficult side at times. Don't you just hate it when a wind gust hits the lure just as you cast it, and it either carries it into a bush overhanging the river or makes it drop short of where you wanted it. Lucky for me I didn't have it lob in a bush, but went close a few times.

Ahead of me now was close on 600 meters of fast water and it's an area that I know really well too. It was always a great stretch of river to fish as it did hold some nice solid browns at various times of the season. I'm hoping it is holding a few today too. But it wasn't to be as over this long fast water run all I managed was seven more hookups and these were all small (280gm) browns of which I could only keep three of them on the spinner. Those lost went the same way as all the other ones did today. I had now had enough and it was close on 6.45pm, besides I still had a 30 minute walk back to the car. So in all, it was a good session with having 17 hookups. The only downside to it was that I did lose 9 fish from that amount of hook ups. One thing I did notice which didn't impress me was the five Cormorants that flew over as I was heading back to the car. Not something I wanted to see as these birds have really taken a lot of fish from the rivers in Tasmania over the past three or four years now.
Cheers
Adrian 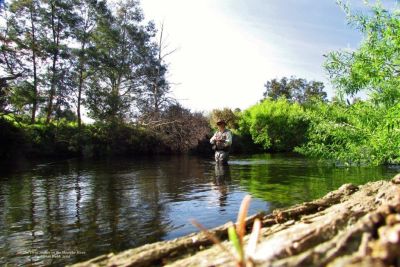 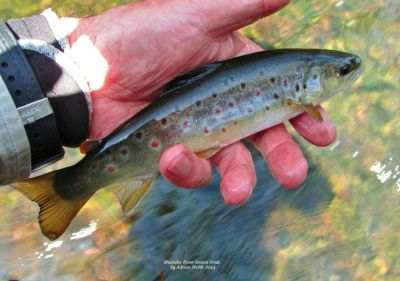