Once a prime trophy water, Lake Dulverton has suffered significantly from periods of drought since the 1980’s and has dried up on several occasions since then. Most recently, only the small ‘coffer dam’ – the small section at the base of the main lake – remained as an aquatic refuge.

Then, after nearly 15 years, the dry main lake bed was resurrected with the drought breaking rains in 2009 and the Inland Fisheries Service began restocking it. Now, having sustained water levels over the last two seasons and supporting plenty of fish, a reinvigorated Lake Dulverton is open for business this season.

Being a shallow natural lagoon situated in the dry sandstone midlands of Tasmania, evaporation and seepage have always been a problem at Lake Dulverton. This has not deterred the residents of Oatlands, however, since the township was first settled in the 1800’s from claiming the lake as a valuable freshwater resource.

Apart from its other recreational and irrigation values, Lake Dulverton’s fishery began with the first release of trout as early as 1892. By the 1920’s it was renowned for producing trophy brown trout. Thus began the fishery’s boom and bust history as it responded to periods of inundation, featuring exceptional growth rates of stocked fish due to the natural abundance of food.

For instance, in 1960 and 1975, the Lake overflowed and the fishery was in prime condition through until the late 1980s producing quality fish averaging in the 2-3 kg size range. It then began to dry up and by the mid 1990s, the lake had become unfishable and only the coffer dam, which was supplied by bore water, remained.

Despite this, in the mid 1990s, the Oatlands High School established an aquaculture centre on the site of the old rowing shelter. It supplied young rainbow trout in the 100 - 1,000 g weight range through to 1996, which were released into the coffer dam for the locals to catch. These stockings, along with additional stock from the Salmon Ponds, proved most effective with fish subsequently caught at over 2 kg in weight.

With no natural recruitment, the fishery has always been maintained by stocking. Over the years, it has received a variety of stock including juvenile brown trout (wild stock reared by the Service), wild brown trout adults transferred from Arthurs Lake, domestic adult brook and rainbow trout, and even tiger trout (surplus display fish from the Salmon Ponds).

Over the past three years, it has been stocked with 2,724 brown, rainbow and brook trout in a range of age classes (see the table opposite). Due to the natural abundance of food in the lake, primarily shrimp, snails and other invertebrates, a majority of these fish will have grown significantly by now, possibly reaching up to 2.5 kg.

Hence, this fishery should produce good quality eating fish, and being situated on the outskirts of Oatlands and close to the Midlands Highway, Lake Dulverton is a valuable and accessible boutique water. It is best fished early in the season in case low rainfall and high evaporation rates over the summer take their toll on water levels.

The Restoration and Revival of Lake Dulverton

Local angler, Kerry Mancey remembers the epic fishing at Lake Dulverton during the 60s, 70s and 80s, and hopes for a return of the good old days. He started fishing there in 1961 with his dad, Finn Mancey, who was the Secretary-Treasurer of the local angling club during its prosperous years.

At aged 7, he caught his first trout – a 2 lb 12 oz brown – on a redfin wobbler. He has kept detailed angling records over the years and introduced a good number of people to trout fishing, including his own son James, who caught his first fish – a 7.5 lb rainbow – at the age of five. Here’s what Kerry had to say about fishing at Lake Dulverton, his memories of the past and predictions for the coming season.

‘When I started fishing, there wasn’t much weed in the lake but later it grew so thick that anglers would cut a patch of it using a hand scythe to create their own personal fishing hole. They used frogs as bait back then and it took a fair amount of skill to flick the frog to the back of the hole, then once the fish struck, to keep the tension on and stop it from getting into the weeds. With quite a few fish in the 6-7 lb bracket, it made for exciting fishing!

‘My best season was in 1976-77 when I caught 57 fish with an average weight of 4.5 lb for a total of 50 hours of fishing. On a typical evening of two or three hours fishing, I’d catch four or five fish each weighing four to five pounds! And they were good quality fish too – adult brown trout transferred from Arthurs Lake which was overstocked at the time.

‘The release of these Arthurs’ adult browns from Hydro Creek continued through the 70s and 80s. Dad and I fished a lot during that time and we caught a lot of fish! We’d often have to give fish away to friends because there was no more room in the fridge! One night in August 1981, I went to Mars Point and started fishing at midnight. I fished for 50 minutes, caught three fish between 3-4.5 lbs. I’d cleaned them and was home in bed by 1.10 am! The biggest trout I ever caught in the lake was in 1987 and it weighed 9.3 lb (4.15 kg with a length of 685 mm).

‘The lake’s always produced magnificent fish because of the mass of food there. It’s a case of ‘dry food – just add water’! As soon as it fills, the shrimp just flourish and the fish clean them up. The stocked fish grow quickly up to about 5.5-6 lb and then their growth levels out.

"For example, in July 1988 about 200 fingerling wild brown trout of about 140 mm were released and by February the following year, they’d grown to 400 mm. In May of the same year, 70 adult brook trout weighing around 2 lb were released. I know for a fact that they were all caught by locals not long after the season opened at nearly 4.5 lb! They had very red flesh and were excellent eating – a true table fish.

‘Within days of the lake filling from the rains in 2009, the shrimp were blooming after 15 years of being dry in places. I filled a jar with a scoop of lake water to show a group of school kids and it was full of shrimp. On the same day, 6,000 young rainbows were released and I reckon they’d easily be about 5 lb by now!

‘I expect this season to be very good. The recent rainfall of about 90 mm has lifted water levels on both sides of the lake by around 300 mm and further rises are predicted. This should ensure enough water to cover us for this summer period. Plus the food chain for fish is now getting well established and we will see excellent growth rates, particularly for the new stocks that have just arrived. They’ve got plenty of water and more feed, so they should grow very quickly and produce quality fish for anglers’ bags. 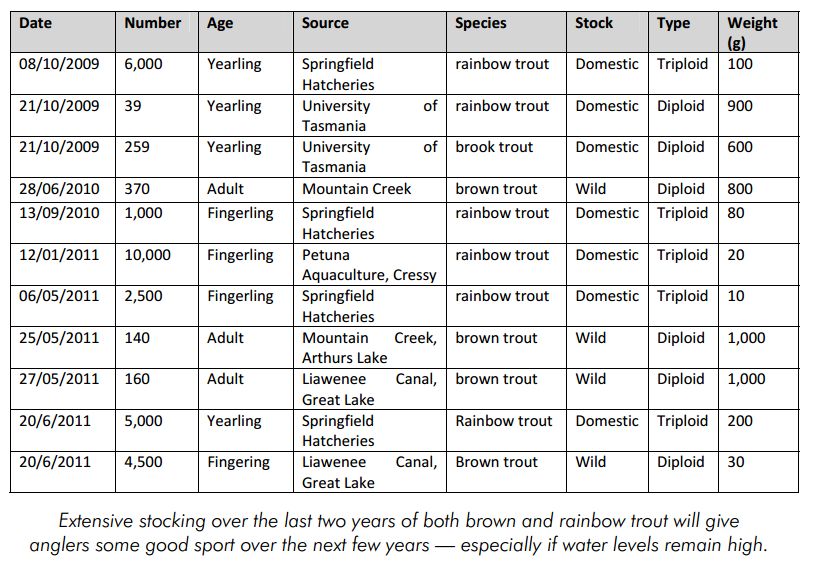