Humungous jellybeans - how to use and tie them - Joe Riley 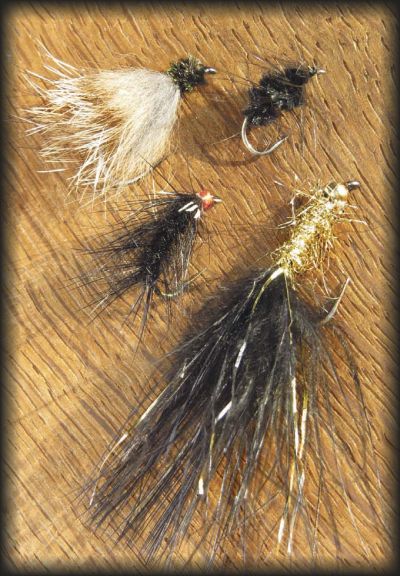 By the end of the brown trout season I’m usually ready for a change, try to catch a tuna, stock up on some flathead or garfish. But by the first weekend in August I am refreshed and ready to go again. Early season is a great time of year in Tasmanian lakes, high water levels with cruising browns in shallow water, wet fly polaroiding, fishing with sinking lines to get to weed beds where the fish are holding and feeding, all great ways to catch an early season fish.

We all have our favourite flies and some great early season patterns. These are a few I like to fish early in the season.

It should not surprise any Tasmanian angler that Sloane’s fur fly is in the mix, it’s just too reliable in particular circumstances not to be in your early season fly box. Like a lot of good trout flies the fur fly is a simple pattern which has the essential characteristics which give a semblance of life and an appearance of food to the trout.

Flooded margins where trout are likely to be nosing around is the territory of the fur fly and it is especially effective in low light conditions. Presented in the path of a moving trout, then a slight draw to activate movement and get the fish attention. An indication of attention is usually pretty clear, a charge at the fly with a resulting bow wave, however indication of a take can range from bleedingly obvious or very subtle. Sometimes a lot of judgement is required in relation to identifying a take, the trout will charge the fur fly and then stop dead as it intercepts it. Has it eaten the fly or stopped to make a final inspection being cautious?

There are a few tricks to help identifying the subtle takes. Grease the leader to within 30 cm of the fly, this will keep a section of leader visible in the surface for an indication the fly has been engulfed, a twitch or draw on the leader towards the fish is a good indication. Maintain some tension on the leader, don’t just draw the fly and let it stop with slack line on the water. After the fish has reached the fly draw very gently and watch for the line and leader picking up off the water removing the curve in the line, this can indicate that there is resistance at the fly, in this case it’s in the jaws of the predator who charged it a moment ago, strike immediately if resistance is seen or felt as the trout will quickly reject and spook if it feels the draw coming from you.

Leader setup can vary depending on the type of water you find fish in. For flooded tussocks or marshy water, or where gutters and holes are likely holding areas a standard 9ft leader is all that is required. In open shallow water it may be necessary to extend your leader out to a longer length at which you can still cast accurately. Normally I will use a diameter tippet about 0.18 mm 6lb fluorocarbon, or 5 - 6 lb 0.20mm monofilament.

The basic fur fly is simplicity personified a strip of natural rabbit fur tied to a hook with a head created out of peacock herl. The fur gives a slight pulse when moved indicating life and the peacock herl has that lustre which makes it one of the all time best fly tying materials. Variations can be olive or black rabbit fur, differing coloured heads or collars, yellow or orange being favourites. Sizes from 8 to 14 are useful.

The Jellybean is a really good snail pattern for tailing and early season polaroiding; it is also a good nymphing pattern over weed beds where trout fed on snails. Woods Lake being classic water for this type of nymphing. For tailing trout, unlike the fur fly, the Jellybean is fished static. Present the fly along the path of a tailing trout, again a greased leader to within about 30cm of the fly or fished on a shorter dropper under a dry fly to register the take. For early season polaroiding a small black bead head added to the fly and fished under a dry fly, the Jellybean is super effective in the Nineteen Lagoons area, the bead head helping sink the fly quickly to the desired depth, getting it in contact with the indicator dry.

As a nymphing pattern the Jellybean can be fished like any nymph, slow, near static at the depth the fish are likely to be feeding, it can be mixed into a team of flies or fished under an indicator dry at a given depth. This is an effective way to fish the Jellybean on bright or calm days when fish are less inclined to chase lures and more inclined to eat smaller natural offerings. I have this fly in sizes 12 to 16, however the 12 is most successful for me.

Again this is a simple fly to tie. Black chenille for a body, a black hen hackle half stripped then palmered through the body and bedded down by a fine dull wire rib. A bead head can be added to sink the fly quickly where it is to be fished mid water, but not where it is going to be fished on the bottom as this will sink the fly into weed and make it less visible and less likely to be picked up by the fish.

The Black Snatcher is a fly I first saw in an English fly fishing magazine. This is a really versatile fly which can be fished as a static dry, moving dry in the surface, sub surface as a top or middle dropper. Jungle cock eyes act as a hot spot on this heavily palmered fly.

The fly is tied on a grub pattern hook, with a seal’s fur body and a heavily palmered hackle comprising of a cheap ‘Indian’ style hackle. Fine stiff genetic hackles are not effective for this pattern as the hackle needs to be able to pulse somewhat and create movement. Jungle cock eyes are then attached on each side of the fly. This fly can be tied in many colour combinations, with black, bibio, tan, olive all being effective, particularly the tan coloured shades during a dun hatch. Head colours can also be varied, and I love orange. Black is a good early season colour. Sizes 10 to 14.

Of course early season on the lakes wouldn’t be complete without a woolly bugger pattern. The Humongous is again an English pattern, developed as a lure for fry feeding fish around the English reservoirs where large numbers of coarse fish fry gather in shoals each autumn. The primary colours for this pattern involve a black tail with a silver or gold body with a matching coloured bead head and flash in the tail.

Commercial patterns use fritz chenille and a palmered grizzle hackle. I use a metallic dub in a dubbing loop to make a shaggy metallic body, no hackle. In Tasmania the silver does not seem to work that well, however the gold pattern is terrific. The Humongous is effective all year round, and it’s great from the first cast opening morning. Where Humongous comes into its own is in coloured water, early season the combination of runoff and spring winds means the water is usually coloured on the lakes to some degree. The metallic properties of the Humongous gives flash in the water and makes the fly more visible than traditional woolly bugger patterns; also UV type flash is less effective in coloured water making a lot of these 21st century materials not too effective.

The Humongous is best fished actively, generally a good pull pause retrieve of varying speeds, or a roly-poly constant retrieve, it’s a fly that works on the aggressive nature of fish working on an opportunity for a ‘big bite’. Early season size 8 is great; however size 10 and even 12 works well in clear water and where smaller fish are generally found. Humongous can be fished in any position in a team; it can be fished top middle or point. I will vary the position depending on the circumstances each time I fish a team of wets, and the position on the leader does make a difference. Starting a new season, braving the weather and getting into a few trout is always exciting after a break.

Early season fish aren’t always in great condition, but non spawning fish, and the presence of the odd triploid trout in the lakes adds to the air of expectation when getting into the first few trout. There’s fun to be had whether you are chasing tailing fish around the edges or pulling them out of deeper water with sinking lines.