Presented from Issue 116, June 2015
Whilst I’ve been familiar with spey casting for many years it wasn’t until just three years ago that I realised the full potential of it, the forthcoming groundswell towards it and the usefulness of it for Tasmania.

During 2011 Marc Bale, Sage’s International Marketing and Sales Manager visited Tasmania and stayed at my Cressy lodge. Marc was in town to help build brand awareness and one night, during the dinner conversation, I asked Marc a few questions about fly rod sales.

My first question was ‘Marc, which company supplies the most fly rods in the world’ ? His answer was Sage sell more than anyone else – they are head and shoulders above all other companies.

So Marc, who supplies the second highest number of rods? ‘Sage warranty Peter’ was his answer. It seems that Sage’s warranty department ships out more repairs annually than any other new rod company sells rods ! Another question that ithought would get a straight forward answer was ‘Marc, what is the biggest selling fly rod in the world’? iassumed, probably like you will, that it was going to be a #5 weight — 9 foot. You could have picked me up from the fl oor when he said that it was a #5 weight — 11’6” Switch rod.

Marc went on to explain to me that people all over the world were learning to fly fish using two handed rods or switch rods. It had not occurred to these people that fly fishing could be done with a single hand! Get that ! My Tasmanian crystal ball tells me there might just be something in that. So, for the past three years ihave put an enormous amount of time and effort in perfecting Switch casting and Spey casting. This winter iam going to do a road trip through the North West United States focussing solely on Spey casting.

What is Switch and Spey rod casting

A switch rod is a rod that lets you use it by switching to either single hand use or two handed use. Typically they are lighter weights and shorter lengths. One that I favour is a #4 weight 11’6” Sage One. The line is similar to a normal #7 and as such can carry relatively heavy fl ies. In single hand use prodigious distances can be achieved because of the length of this high tech lever. If I were to switch over and use two hands the casting becomes effortless (for the technical minded the rod becomes a type one lever instead of a type three. If my top hand simply operates as a pivot point on the upper cork grip my lower hand only needs to pull in toward my body perhaps 10” at 20 MPH and the rod tip goes forward 10 feet at 200 MPH).

Are designed to be used only with two hands. The most powerful one I own is a 15’ #10 weight. It is scary how easily, and how powerfully, I can cast long distances with it. The fact that the line is equivalent to a normal 13 weight means that it can carry huge, heavy fl ies with ease. The thickness and strength of the rod means I can play big fish too.

Of course this is what the Spey rod was designed for. My understanding is that Spey rods and Spey casting were developed on the River Spey in the UK. It is a big river with a run of big salmon. Long casts were necessary to cover the water. Heavy fl ies were mandatory and the fish were big and powerful.

Benefits of Switch and Spey Rods

• A relatively small back cast area is required.

• A dynamic roll cast delivery is safe as the fly never passes your body.

• Changes of direction are easy and instant.

• It is a fun way to fish compared to a single hand rod.

How lucky are we here in Tasmania to have visits from two of the highest profi le fly fishers on the planet, and all in this past year.

April is a great Spey casting exponent. She has fished that way in her native BC, Canada since she was young. April would have to be the most prominent female fly fishers in the world and she built her world-wide reputation on the back of Steelhead fishing with a two handed rod. Her recent Spey demonstrations in Launceston were well received. For her diminutive size it is remarkable how far, and how easily, she can cast. Interesting is the fact that April loves her Bob Clay bamboo Spey rod like no other. (I know how she feels -maybe it is like I love my Nick Taransky bamboo spey rod)

I first met Simon in 2000 when we competed against each other in the World Fly Fishing Championships in Bristol, England.

Like me, Simon had come from a long and successful tournament casting background: he is one of only a handful of people to represent his country at world level in both fly fishing and fly casting championships. He was a formidable competitor ! What Simon does not know about fishing is not worth knowing.

Simon recently visited Northern Tasmania where he spoke at an Australian Fly Fishing Museum cocktail party and demonstrated Spey casting on the South Esk river the following day. His appearances were well attended and I for one was super impressed with his ability to inspire, to teach and to cast a spey rod. At days end Simon and I cast together under the moonlight on my casting pond. We shared a gin and tonic and he continued to cast. I did not think there was anyone on the planet more passionate about the cast than me – I was wrong.

There I was, a month after April and Simon’s visit, standing knee deep on a sandbar. The wild southern ocean pounding just a kilometre behind me, huge rugged peaks of the southern Tasmanian wilderness in front of me, and a channel full of clear blue incoming tide at my feet.

The casting was beautiful. It felt beautiful, it was effortless and fluent - smooth. I am sure it looked good. I can truly say that it did not matter if there were no fish there. But then….. it happened. I should have known better. In a spot like this it was impossible to pull a chartreuse and white Clouser for any great distance through the water without it being eaten.

Cast after cast was eaten until the fish became a distraction and I happily cut off the hook so that I could keep up the casting practice. Watching those super smooth, powerful Vee loops sail off into the distance does it more for me than pulling in fish. Then came the garfishing. I bet the dozens of gars I caught using the switch rod were the fi rst ever gars caught this way in Tasmania. I don’t mind saying it but my two companions would not have caught a quarter of the fish that I caught. In this case the long fi ne tip #4 — 11’6” switch rod and fly line was a superior gar fishing pole than the conventional spin rods.

So, give it some thought. Get in early my crystal ball is not very often wrong.

Peter is conducting spey and switch classes. Go to www.peterhayesflyfishing.com for details. 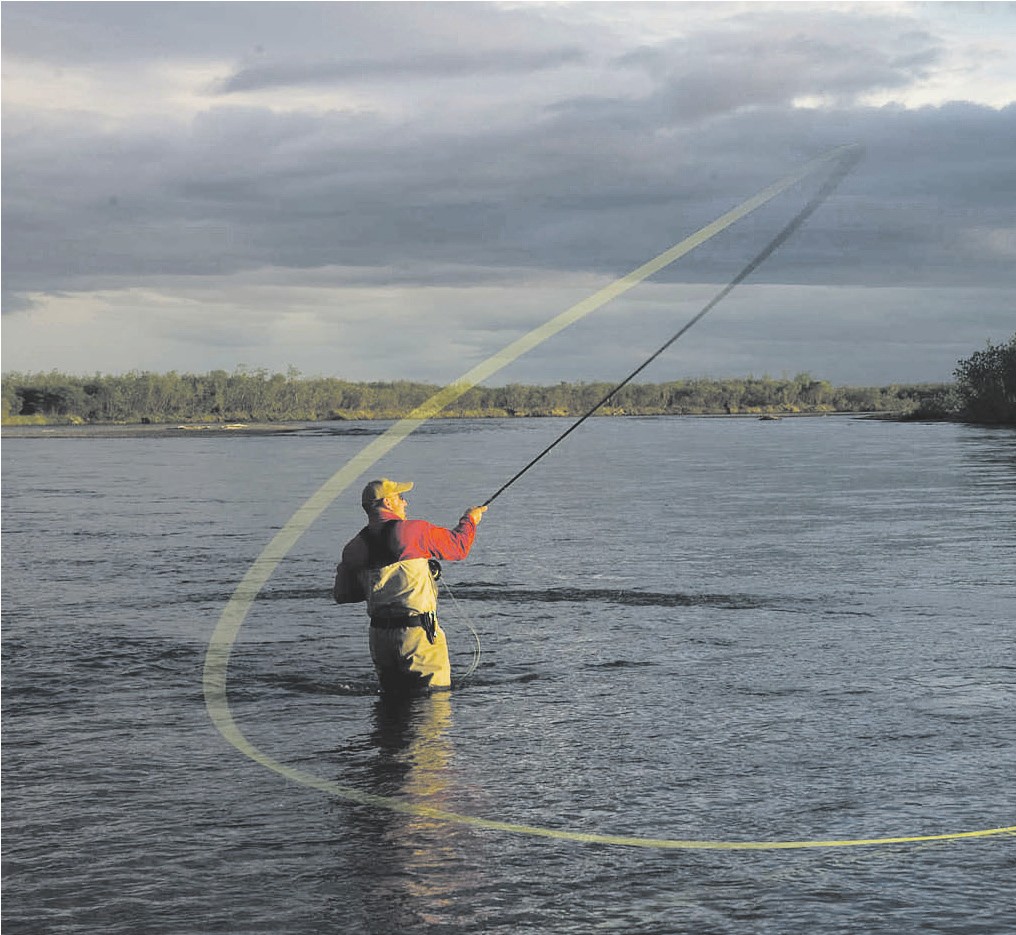 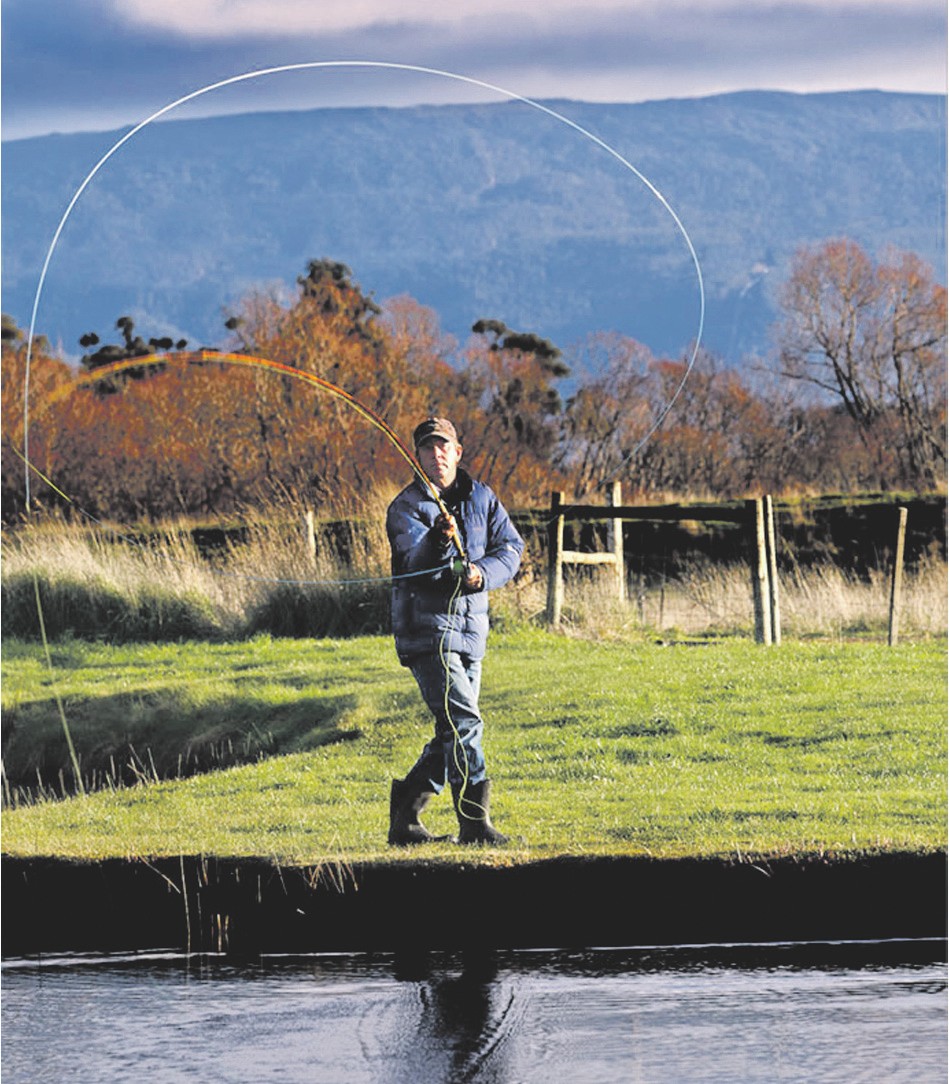 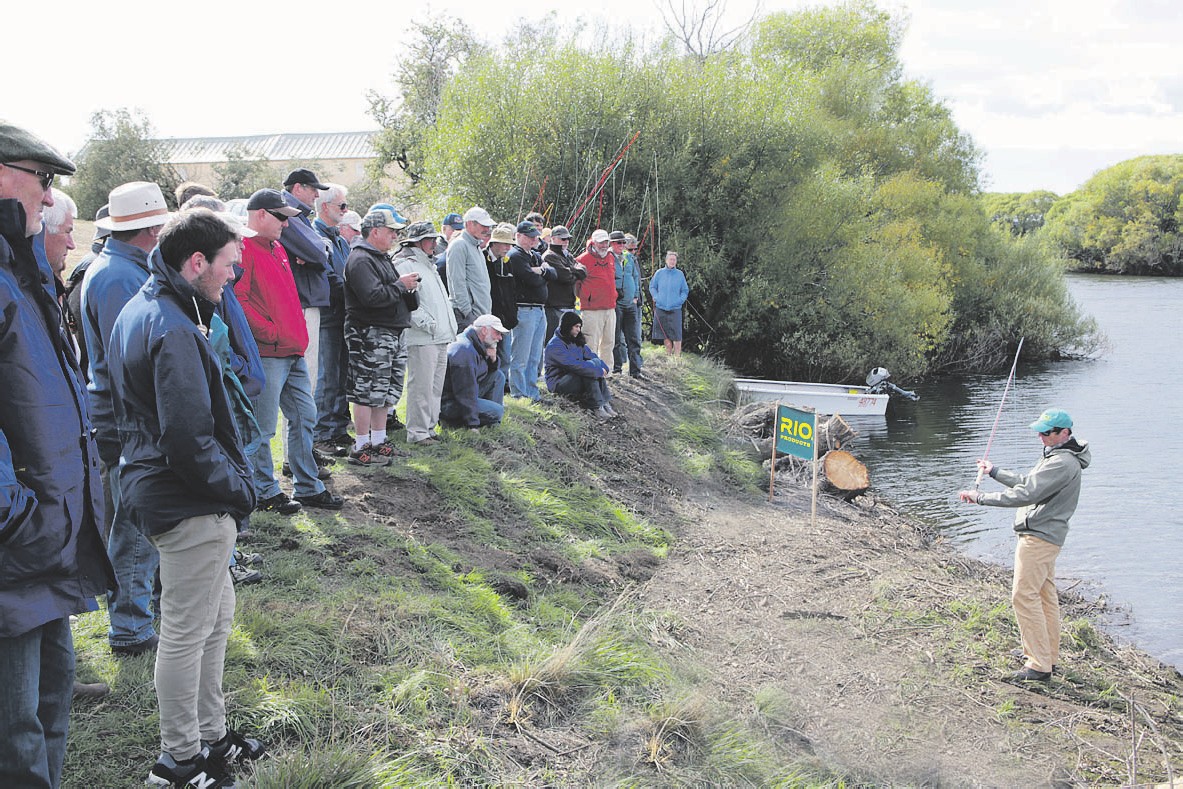