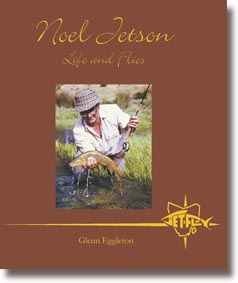 Jet-Fly, as Noel was commonly known by his clients, was Tasmania's first professional fly fishing guide. He had great fly fishing teachers in David Scholes and also Dick Wigram. Dick taught him to tie flies and one thing Scholes taught him was that presentation is usually more important than imitation.

Without doubt, if you asked anyone who ever fished with him what his favourite fly was they would know. If fish wouldn't eat a size 14 Red Tag he would change to a 16, or an 18. Even tailing fish at Little Pine would eat his "Tags'.

Despite his love of Red Tags though Noel developed quite a few flies over his guiding and fly tying years. He kept these secret and sometimes not even his clients would know what had been tied onto their leader. But when he retired his good friend and client, Glenn Eggleton, started writing his biography. Glenn had fished with Noel for many year and thought Noel would want to keep his special flies secret.

Noel was more than happy to share them though and they are revealed in all their glory in "Jet-Fly'.

Jet-Fly is more than flies though it is an inspiring book about a man and family that did stuff for fun and because they wanted to. Money was well down the importance scale, but what the Jetsons lacked in money they made up for in fun.

Born on Flinders Island, the family moved to Tarraleah following work and this was probably where Noel's love of trout fishing started.

It was to be some years before Noel started fly fishing and this came about when he worked at The Examiner newspaper as an engraver. David Scholes also worked at The Examiner, but it was not David that got Noel started. Other work mates included Clyde Spencer, Graham Griggs and Tony Griffiths. They spent many years exploring the Western Lakes on foot, in Kombis and also on BSA Bantams - suitably modified.

Scholes was certainly an influence later on and Noel recalls, at 21, meeting Dick Wigram. Dick had taken a gross of Red Tags to The Examiner Newspaper for David. He divided them equally - half for himself and half for his good friend from Victoria, Fred Stewart. This introduction to Wigram was the start of a lifelong friendship.

New Zealand was home to the Jetson family for two years and what an adventure it was for the whole family. However, the call of Tasmania was strong and home they came. A house with shop front was bought at Cressy and it was then that Jet-Fly and the Jet-Fly shop was born. The rest is history and in the book.

Rick Keam told me this book has the only description he has ever seen on the correct way to apply peacock herl. Sounds extraordinary, but he claims it is true, and if you have seen a genuine Jet-Fly Red Tag you will know what a difference applying herl correctly does.

There are two versions of the book: An A5 soft cover trade edition. This is mostly in black and white, with the cover and flies in the fly tying section in colour. $50.

The second version is a strictly limited Collectors edition of 125 copies. It is in full colour throughout, superbly bound in full leather with endpapers that are Noel's sketches from his personal fishing diary. $500.

Books shown for illustration purposes only. Both editions now available.

Email Mike Stevens, This email address is being protected from spambots. You need JavaScript enabled to view it. to order or call him on 0418 129 949 to ensure you don't miss out.