Young Gun well and truly shows up the Old Gun!
With not a breath of wind in site, pop rang up and said to get the boat out as he was coming to “try” and show us young one up…  drinks1 We were on the water around 12:15pm trawled across the bay with a variety of different lures on. Connor had on a Berkley Gulp Pumpkin seed (That Todd Lambert gave him the day before, thanks Todd!!! cool1) pop had on his trusty old’ black, red and gold and I had on a Gold Mepps Spinner. Connor had a nice hit, and lost it. Then Pop was onto one, but only a perch. We headed out towards the southern end of the island, having a bit of a drift and spin, but the drift was nearly impossible as the lake was mirror image! Not a ripple on the water.  From there we decided to trawl up to the Snowy, were we pulled up and had a few more casts, but nothing. By this time it was around 1:30, and a heap of boats had come out onto the lake. We fished there for a while, but nothing.
Pop then says. “Why don’t we head down the north western side of the island, we’ll get one there. Down there we go, Pop says” If nothing is working that usually works, I’m going with a lure I have never had any luck with, a really old Black and bronze”. I changed to a Berkley Black and Gold T-Tail and Connor left on his Pumpkin seed. Well, we trawled for around 3 minutes, and then Connor yells “I have a monster one on”!  He started winding, I stopped the boat. Pop then says “I’ve got one on too boys and I’m in the middle “Look at me I have nothing on”! wtf1 cry1” Anyway, pop had a lovely brown on, I landed it.  We hadn’t seen this fish yet Connor had hooked, until it done this spectacular jump, the whole body out of the water. He was fighting it for around 5 minutes. When we finally landed it, what a whopper it was! I then weighed the fish. Pops Brown was 1.99lb and 43cm, envy1 and Connor‘s top notch rainbow was 4.2lb and 54cm. envy1 goodjob1 Both fish were in top notch condition.
Now it must be my turn…. grin1 we trawled around the whole island again getting nothing. We decided it would be time to trawl back to Kalangadoo Bay, crossing over via Clarks Point, Connor goes. “Don’t worry you’re going to catch a fish right about now”! You wouldn’t believe it; I had hooked a fish, a little perch! Caught on the Rapala CD1 Rainbow Trout pattern. Connor goes “See I told you, you would catch a fish”! laugh1 laugh1 behave1 we trawled back to the boat ramp getting not another touch.
It was another great session out on the water… For Connor and Pop anyway… agree1 goodjob1 Oh well… I mightn’t catch the fish, but I have the important job of being captain of the boat. Making sure we all get back to the boat ramp safely. I don’t mind not catching fish, as long as someone gets something, nothing worse coming back in and having no fish!
Samuel 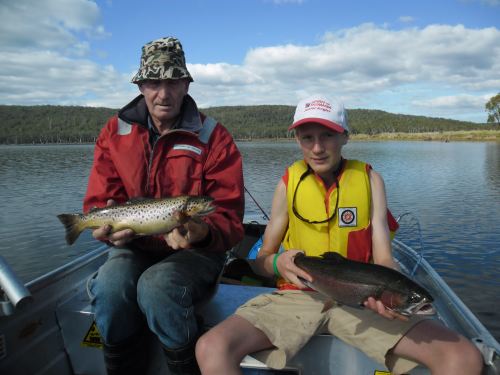 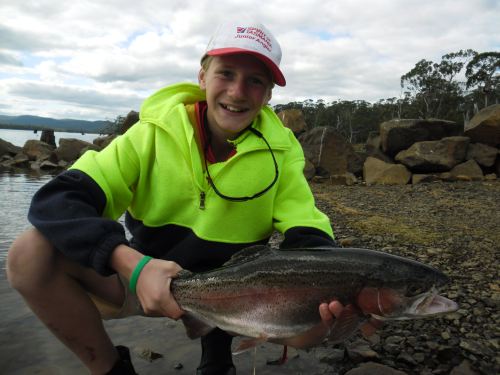