Presented from Issue 108, February 2014
Kayak fishing is becoming even more popular and is a great way to fish. With our increasing awareness of the importance of physical exercise, houses getting bigger but yards getting smaller, and the ever increasing cost of fuel its understandable why. Kayaks open up many fishing opportunities denied to the land based angler, without the expense and logistics of owning a boat. Mic Rybka looked at some trolling techniques last issue.

Here are my experiences...

Fishing from a kayak can be as simple as soaking a bait or a more technical style like fly fishing or even live baiting for tuna. An often overlooked method of kayak fishing is trolling, yet it can be very productive, and to me seems a natural thing to do.

What do you need?

A kayak with a rod holder or two. The rod/s should be positioned so you can see the tips without turning too much. This lets you see hits on your lure; it also lets you see at a glance if your lure is working, or if it has been fouled with weed. Even though my kayaks are Hobies that are pedalled, both have adjustable rod holders mounted just behind the seat and the rods angled slightly up and forward for trolling. This means they are out of the way for getting on and off the kayak, and the kayak can be paddled if need be. Some younger and more flexible anglers mount rod holders far enough forward that they can paddle without being obstructed by them.

A fish finder or sounder is also very helpful. It helps to know how deep the water is, as well as seeing structure, weed-beds, and even fish. You can troll and catch fish without one, but you will usually catch more, and get fewer snags, with one. It doesn’t need to be all that fancy. The Lowrance Elite 4x is a great little colour sounder for under $200. Garmin and Hummingbird also make good sounders in this price range. For a bit more you can get the DSI (Down Scan Imaging) version, which is even easier to interpret in this kind of fishing. Some people advocate a GPS “so that you know if you are going the right speed for the lure”. I disagree. If the rod tip is wiggling, you’re going the right speed. GPS do have other uses though. 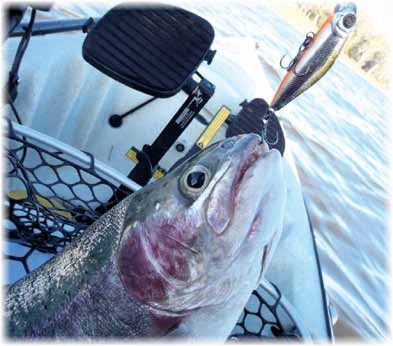 What species can you catch

Just about any fish that will take a lure can be caught by trolling from a kayak. Trout of all flavours, salmon (Australian and Atlantic), bream (slow it down!) trevally, tailor, pike, ‘couta, squid, wrasse and flathead have been among the species I’ve seen caught trolling from a kayak this year. Why? Kayaks generally move at a speed that is very much suited to trolling for many species. You will have to be pretty fit and probably paddling a fast fibreglass ‘yak to target pelagic fish, but for species like trout, bream and salmon, any kayak, with just about any kayaker, can move at an appropriate pace. To me, it’s a no–brainer, when launching and heading to the “first spot,” to drag a lure or two behind. The same applies when moving from one spot to another. I seldom pedal anywhere without at least one lure out, and some days it works so well that it’s the only method I use. It can also be an effective method for locating fish, then you may choose to anchor off and cast to them if you prefer. It’s also about the simplest style of kayak fishing, as you just dawdle along and enjoy the scenery between fish. No need for anchors, drift chutes, tying off etc.

Simple really. If you know the depth of the water and what species you are targeting, choose an appropriate lure, cast it out behind you, and start paddling (or pedalling)! You don’t generally need the lure too far back. Just a cast away is usually plenty, because the kayak is much quieter than a boat with outboard, or even an electric, so you are less likely to spook fish. 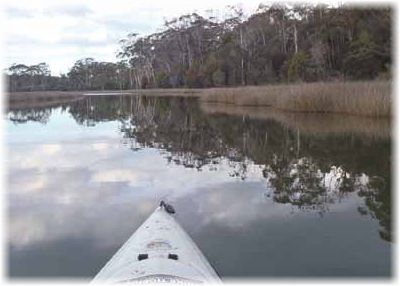 Where should you troll

All the same places you’d target fish with any other method. Edges of weed beds with diving lures or wobblers, over the top of weed beds with shallow running lures, flies, or soft plastics. Along banks and drop-offs are worth a try, as are shallow bays. When trolling along a bank I prefer the one that is casting a shadow onto the water, but sometimes the sunny one will be the one that produces. Keep in mind that on a river, the outside of a bend is usually deeper, so if you believe the fish are down deep, that’s the side you should be on. You can even troll over flats, because a kayak is very quiet and unlikely to spook fish. It may be worth having the lure a bit further back than usual if the water is very shallow or particularly clear. In a slow flowing river you can troll in both directions (upstream and downstream). If the flow is a bit faster, most fish will be facing into the current, so trolling with the flow (downstream) will be best.

Do I need special tackle?

No, you can troll with a handline if you like. Of course, you can use downriggers, leadlines, paravanes etc, but you don’t usually need to. You can happily use your usual gear. You can get away with cheap, short rods because casting isn’t important, but you don’t have to. A lanyard or leash on any rods trolled from a rod holder instead of held is a really good idea. Make sure your drag is set properly, as fish hooked when trolling often hit really hard. For this reason, I prefer a rod with a slightly softer action to absorb some of the initial shock, especially when the rod is in a rod holder and not held in the hand, even more so when using braid mainline and fluorocarbon leader as neither has much stretch. If you use a decent length of mono leader you can get away with a stiffer rod as the mono will stretch and help to stop hooks from pulling. 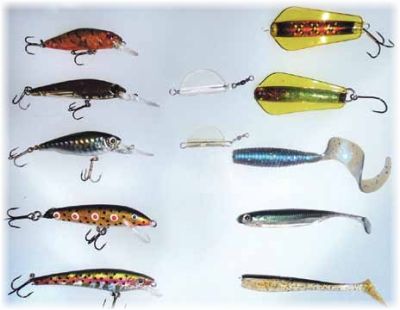 Many lures are suitable for light tackle trolling. The tried and true wobblers (Tassie Devils, Wigstons, cobras, etc) remain a favourite for trout in many lakes, and if you do loose a couple to snags they won’t break the bank. Minnow styles are also effective for many species. Your local tackle shop will be able to advise colours / patterns for your chosen waterway. Soft plastics will also work, but you will need a heavier jighead than usual to stop them just skimming along the surface, and you must rig them straight so they swim straight and don’t spin. Test them next to the boat once rigged. In the brine over the warmer months it can be worth trolling a squid jig if you are paddling over shallow (< 6m) reef or weed or close to rocks. I would not troll any spinning style lure, even with an antikink, unless you have a love of wind knots.

Wet flies can also be trolled effectively, usually behind a length of leadline or small sinker (barrel sinker or split shot) to keep them below the surface. Along with soft plastics rigged with a single hook, or “weedless”, this can be a great method to use when weed prevents the use of other lures.

So, next time you launch your ‘yak, and head of to your spot, why not drag a lure or two behind you? Who knows, you might catch fish you would otherwise have just paddled straight past. You may even decide the whole area is your spot, and spend all day trolling around, or explore some new areas you never went to before. 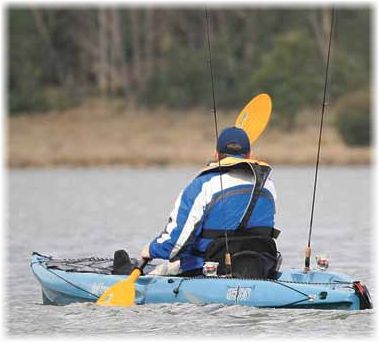