After giving the elbow a two day rest since the acupunture last Friday I thought I would put it  to the test with a short spin session on the Mersey River at Merseylea. I was on the water by around 10.00am which was really not the best time to be starting a session seeing it was warm, clear water and sunny. But I was only here to see how the elbow would hold up. The first run I fished was a long slow flowing section and I didn't spot a fish at all, not even a follow. So it looked like being on the river at this time of the morning exactly what I expected and if I was going to catch a fish today, then I was going to have to work for it. I noticed a chap watching from the bridge some 100 meters behind me and I was wondering if he had wanted to fish this area. The next time I looked around he was gone and I assumed he had gone below the bridge to fish a lower part of the Mersey.

I was thinking of changing the little copper black fury for a spinner with a black blade or a Bug stone fly spinner given the bright conditions, clear water and insects that were hovering above the water.. I decided to give the copper one a little longer. I came to a back water that had a nice flow of water running through it and I flicked the little Mepps to the underside of an overhanging willow and immediately had a hook up. It was a nice solid medium (420gm) brown that I slowly led to the river bank. I didn't bother with the landing net today as I wasn't expecting to catch any thing large, hence the reason for leading the fish to the river bank. I worked my way up the rest of the backwater to where it started from the main river and all I managed was a couple of hit and misses.

I was now back in the main stream and flicked the spinner into a shaded area on the opposite bank and then slowly retrieved it until it reached the faster flow where I then let the spinner drift with it. It wasn't long before I had another fish on and this time it was a small (340gm) rainbow. Well, the fishing is better than I expected so far, and I'm not really having to work that hard for them at the moment. I'm just doing my normal thing. Moved up some twenty meters and I was into another trout, this one was the smallest of the three caught so far. It was only around 250gms but well conditioned and still full of fight.

I started to head on up to the next stretch of river when I spotted the bloke that had been on the bridge had walked on through the paddocks and got in the river some two hundred meters ahead of me. I new that I only had a couple of hundred meters left to fish now seeing as he's got in front of me and stuffed my session up. I went back to working this nice 200 meter run of fast water which now had some nice browns jumping in it. I thought this is probably the time have a change of lure and so it was on with a F-3 Rapala rainbow pattern, I had a fish on after only three casts. Another nice brown of around 390gms. This fast water stretch gave up two more browns and these were the biggest for for session so far. The first one was around 600gms and the second one would have been close to 700gms, but there's a story to the second one caught that didn't end well.

By not carrying a landing net today meant that I would have lead the fish into the shallows and then pick the fish up to take out the lure. With the second fish now in the shallows and seeing it was very well hooked with the Rapala, I decided to take a photo of it while it's still in the water. This turned out to be the wrong decision for sure. While holding the rod in the left hand trying to keep the fish in the one spot and the camera in the right hand to get the shot I notice that the line was wrapped around one of the trebles. So before I could do any thing this brown threw it's head to one side and the line parted and so did the trout with my Rapala still hooked in it's mouth. This was a lesson well learnt today especially with bigger fish, and that's to take the landing net with me in the larger rivers and don't try and take a one handed photo with a large fish in shallow water when using 4lb line.

I now noticed that the fly fisher had moved on further upstream again and hadn't really put that much time into the long run of water that had fish rising in most sections. I can't see why he didn't work that 400 meter run at all. I decided to head back to below the bridge and fish a 200 meter length of the river before calling it a day. The wind had really picked up now and I'd given the elbow a good test and it was still feeling fairly good, plus I didn't want to over do it. Once in the river below the bridge I cast into a small slow flowing strip of water and I was into a fish first up. It was the surprise catch of the day and a fish that I have never caught in the Mersey River in all my years of fishing it. In fact I didn't even know that the Mersey River had these fish in it. It was a Redfin Perch and it was in great condition too and beautifully coloured. It went 400 gms on the digital scales. I did keep this fish and I actually had it for tea tonight. So it was a good day all round that finished a surprise catch of the day. All trout caught today were released too. 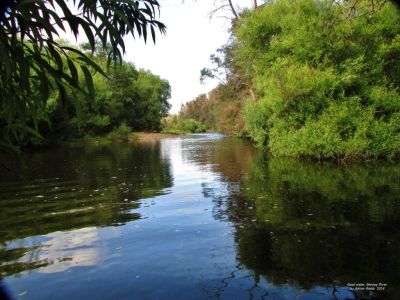 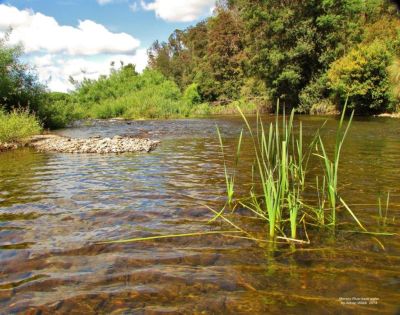