The difference on a river from one day to the next

The difference on a river from one day to the next

2-12-2014 Trip One
On Monday the 1st December I headed on over to the Mersey River at Kimberley & Merseylea. The conditions were overcast,humid and with light drizzle on and off, but the only downfall was the wind coming from the Nth East something I never like fishing in. Once in the river at Kimberley I was lucky enough to hook a nice rainbow on the second cast, but as they've been doing lately this one did the same. It tossed the hook on the second or third jump I think it was. There were quite a few fish leaping from most sections in the river and this is always a sign that it's going to be a tough session.

Anyway I was only fishing the fast water sections again today as this is where I'll have the best chance of catching a few trout. I fished three long runs and managed two hook ups for one rainbow and one small brown before I decided to head on over to Merseylea. I fished three sections of fast water and didn't see a fish so I gave it away. I had tried several different #00 blade spinners and a few Rapalas but the best lure was the #00 Black Fury (blade blade/yellow dots) as this was the one that the trout preferred. 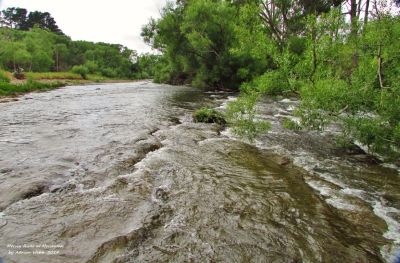 3-12-2014 Trip Two
Today's conditions were almost the same as yesterday except the wind was from the Nth West and that should make for better fishing. Another late afternoon session it was going to be today, and this time a lot further upstream on a private property that I'm lucky to have access to. This area is tough to get to as one has to bush bash for at least half a kilometer before getting some clearer ground. Then it's another 35 plus minutes walk to the river. The sun had broken through the clouds as I headed off through the bush, boy it was hot and by the time I reached the river I just sat in the shade for some ten minutes to cool off. The perspiration on my face kept fogging up my sunglasses which was a pain in the butt.

I had now cooled off and started my session around 5.00pm and the cloud had also started to move back in which was great. Well, in five casts with the little #00 black fury I had two medium browns in the net. Yes, it was a fast water run too and this property has around two kilomters of fast water along it, so it was looking good so far. The next stretch I had two hookups but lost both fish and the run after that I did manage a nice solid rainbow and lost another two browns. They were in a much more aggressive mood today. I was casting up and across the river and letting the spinner drift with the flow until I could feel the weight of the fish before lifting the rod higher to set the hook. I could see them following the spinner as it drifted with the flow and so a bit of work had to be done a few times to get them to strike the spinner, where as other times they would just smash it. It was the ones that hit the lure hard and fast that tossed the spinner most times.

The further upstream I worked the better the fishing became, and these were all nice solid river fish too. They weren't over big trout, but most averaged around 400gms and were all full of fight in the fast water. One section of fast water I picked up four rainbows without having to move,it was just a matter of casting and letting the spinner drift until I felt the weight of the fish on the lure before setting the hook as I did earlier on. I did try a small Rapala CD-1 brown trout pattern in a slower section between two fast waters and picked up a nice solid brown that went 410gms. I fished on and caught and released several more rainbows and a few browns and finished my session at around 7.20pm. Overall I had hooked 13 rainbows of which only seven were caught and released, plus hooking 11 browns of which six were also caught and released. So today's session was much better than yesterday's that's for sure, but I would just like to keep a few more trout on the hook some how. Still can't complain really as this is what trout fishing is all about. 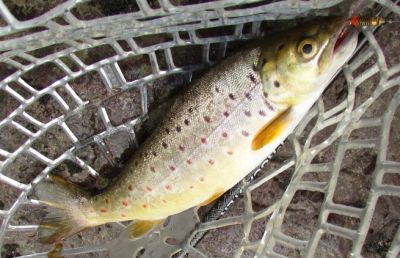