Late session worth the effort

With a very light breeze blowing I was in two minds all day whether to go and have a session on the Mersey River or not. Finally around 2:30pm I decided I would go for a late spin session after all. I was in the river by 3:00 pm in what was really good conditions even though the river was running low and clear, not only that I would be fishing in full sun for the first 400 meters of river until I reached the shaded areas on the river. I started off using a hard body for a while without any sign of a trout before I changed to the gold Aglia spinner when I reached a 300 meter shallow fast water stretch of river that varied in depth from (4'' to 6'') 10cms to 20cms.

This stretch of river has never let me down every time I've fished it, even with the river being so low & clear I still feel it will still give up a few trout today. This area I'm fishing today is really tough on the body with the river bottom being so rocky and not only slippery, they also roll underfoot as I make my way upstream. Still, it's always worth the effort fishing here because I always get at least one or two decent size trout here among the other small to medium size browns & rainbows. It didn't take all that long when I had my first take in the fast water, a small brown of around 260 grams was soon in hand and quickly released.

The very next cast saw a small rainbow take the spinner, it too was soon in hand and back in the river. I worked on upstream having a hit here and there but missed everyone of them. Still the fish are here which is good to see, it's only a matter of time before I'll have a hook up. Over the next two hundred meters of fast water I did catch and release three more rainbows from six hook ups which wasn't all bad. I was now heading into a shaded slower flowing stretch of river that varied in depth from around (2' to 4') 60cms to 120cms so it was back on with the hard body here. This wide two hundred meter stretch of river gave up just the two follows from a couple of nice browns until I reached the head water.

It was here a solid rainbow took the hard body and after a good battle that lasted several minutes I had it in the net. It was a well conditioned fish that went 660 grams, quick photo and it was on it's way. From here to where I'm ending the fishing session it's mainly all fast water so it was back to the gold Aglia. The very next section which was a small fast water gave up another rainbow on the second cast and that was the only trout caught over the next sixty meters of river. I was now into my last piece of water before calling it a day mainly due to the fact the sun was getting low and I had a 600 meter walk up a steep thick bush covered hill back to the car. This last piece of water I was about to fish was at the top end of a large pool that the main river flowed into and it usually fishes pretty well except for my last trip here when it didn't give up a fish at all. I worked it for around ten minutes without a follow or a touch from a fish even though there were a few browns leaping in various areas where the river flowed into it.

I still thought I would have picked up a rainbow trout here but it wasn't to be. As I headed along the edge of the river I came across a small shallow narrow run off area from main river that had a small log and a few branches in it. A fifteen meter cast with the Aglia and lobbing it next the fallen log saw the spinner hit hard & fast by a very nice brown. This fish made several runs back towards the wooded area where it was hooked before turning and heading downstream into the large pool. Once in the pool this turned the odds my way and it wasn't all that long before I had this brown in the net. It was well hooked, too well hooked in fact as it had swallowed the lure so deep it had damaged it's gills an was bleeding quite a lot. Too much so that I had to give it the donger, it was a beautiful 735 gram male in top condition. That was the end of the session, not the ending I wanted but these things happen every now and then. The fish was given away to a 83 year old neighbor who just loves trout. 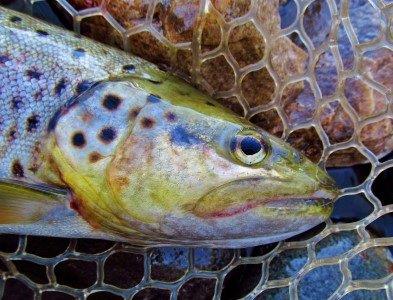 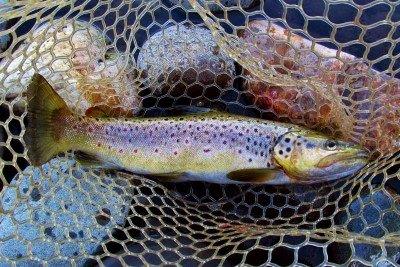 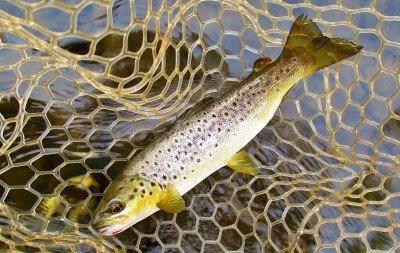 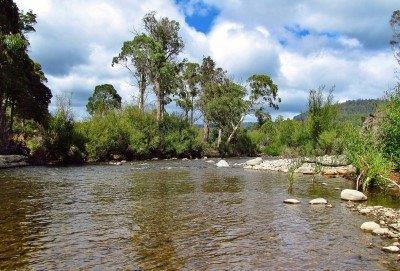 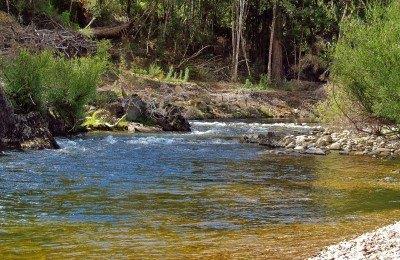 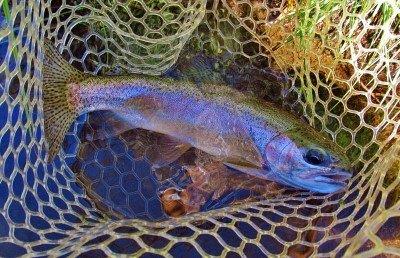