The conditions this morning looked okay with a maximum of 14 degrees, mainly overcast and a light North Westerly breeze with a change late this afternoon.. Given that we haven't had rain for a couple of days I thought a trip to a tannin waters of a small stream in the upper reaches of the Mersey River was worth a go.

So it was off to the upper reaches of this little tannin coloured stream while it still has some good flow in it.. Not only that, I can give the 5'6'' Daiwa Presso ULS (see my last report) a good workout in it too.. It was a pretty late start because I didn't hit the water until just on 11:00 am not that it mattered all that much with it being mainly overcast, plus the water is still pretty cold. Besides, there's no need to rush any way I have all day.. The stream had a good flow of water in it so I'm hoping it will give up a few trout this trip like it has done my previous trips. I started off flicking a small gold Aglia around and had a hit and miss in quick time which was a good sign.

Well that was it for the next ten minutes, all I had was a few follows, the trout weren't in a gold Aglia mood at all. I thought I would give the F3 Rapala gold/black hard body now, this one did well up here last time. That lure was no better than the gold blade Aglia spinner so I changed to a small Atomic ghost gill brown, it wasn't all that long before it picked up the first trout that hit it. Three casts later I had another brown take it only to lose it on it's first leap from the water, this happened again on the next hook up as well.

That was enough for me to go for the small Daiwa Yoguri ghost brown lure now, a lure that I know is very deadly on the trout. I didn't really want to use it in the dark tannin water because I couldn't see where the snags were and I was worried about losing it in this little stream because it is full of them. It didn't bother me using it in the shallow runs, it was the deep runs that was the worry. Any way I took the risk and used it, the lure worked a treat. The first small run I picked up two browns in three casts with the best trout going 540 grams. This continued on over the next six stretches of water, I caught and released five more nice well conditioned browns. I had now been in the water for an hour and a quarter for a total of eight browns caught and released.

I decided I wanted to catch and release at least four more browns to make it a dozen for the trip. After another hour and a half of fishing I picked up six more browns from ten hook ups and several hit and misses before I called it a day at 1:45 PM give or take a few minutes either way. The day ended with fourteen browns being caught in total which made for a very good time spent in this small tannin coloured stream. The little Presso 5'6'' ULS rod was perfectly suited to this tight water as I knew it would be..

**There's one thing I have forgotten to mention in my trout reports and that's what to check on when using hard body lures when using fine/low breaking strain mono lines. After every fish caught & released I do a tug and pull test with the lure and line. At only takes a few seconds and may well save you losing your lure as well as what may be your PB fish too.. All I do is to hold the lure in one hand, grip the line around 50 cms (or 1-1/2 feet) above the lure and give it a few tugs and that's it. The reason I do this when using hard body lures is because a hooked trout will roll and this quite often causes the line to slip into the gill cover which can put a small knick in the line and that's all it takes to break and lose the lure and fish..

Also the line can be damaged by the it being wrapped around one of the trebles/single hooks or even by its teeth if it becomes tangle in it's mouth during a roll. Even if you are fishing with a heavier line I would advise you to still keep a check on it. When using the Mepps spinners with the anti-kink set up I still keep a check on the 6 lb mono trace as well because it can and does become damaged after a while. But know where near as quick as when using hard body lures.

The best trout of the day 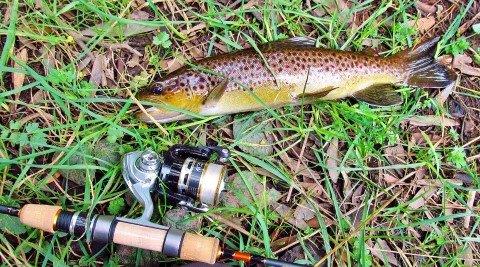 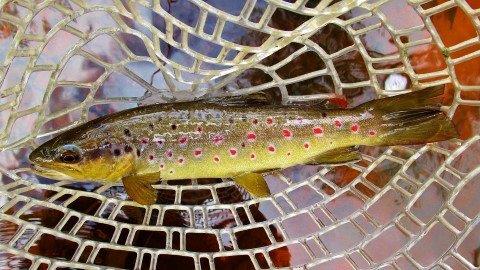 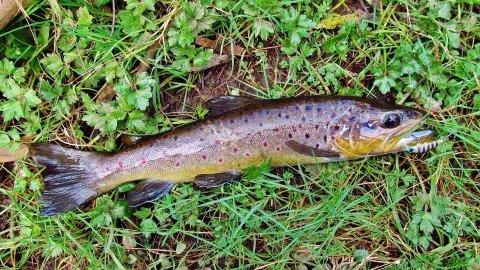 Always pays to check the line after every fish caught 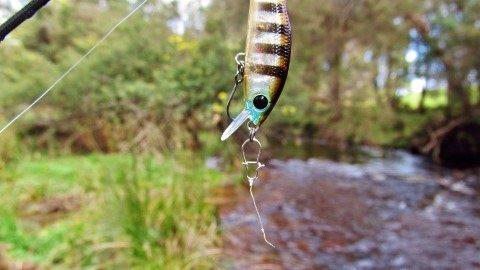 No margin for a poor cast here 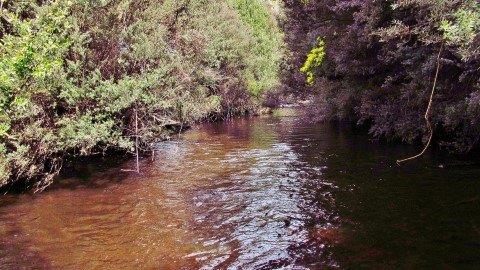