With the Australian National Fly Fishing Championships on over the next three days I decided to give the upper reaches a fish. I arrived just after 7:00 am in what was overcast conditions, no wind and it was quite mild, really good fishing conditions. I did have a tough 1.5 km walk ahead of me to reach my starting point which I reached just after 7:30 am. With the river running very clear I was in two minds whether to go for the hard body lure or my ever reliable little Mepps spinners. I decided to go with the Mepps, now would be a black or gold blade spinner to start with. I went for the #00 (1.5g) gold blade Aglia for starters to see how that would go, if it didn't then I'd change to the black one.

Being overcast I felt the gold would be fine for starters in this long stretch of fast and medium flowing shallow water, with no sign of insects yet the trout could be in an aggressive hungry mood. It only took a couple of casts into a narrow fast water between a couple of rocks before I had my first take on the spinner, it was a small 270 gram brown. Two casts later I had my second brown in the net, it was another small 280gram brown. This is just the start to a session I wanted even if the trout are small at least there here and very aggressive at this stage. I know the cloud will break up once the sun gets a little higher so I have to make the most of it while I can. I kept working my way upstream by working the water ahead of me then with the next cast around one meter to the right and so on, it's really just working the spinner in a 90 degree arc. The reason I wasn't casting to the left was because it was shallow and full of brown algae..

I kept this up as I slowly fished my way upstream and was catching trout consistently, they varied in size from around 280 grams up to 420 grams. So after forty five minutes of fishing I've already caught ten browns with each and every one of them fighting all the way to the net as most river trout do, great fighting fish. I had now reached a small fast water run and it was here I had a ball, in ten minutes of using my cast and drift method I caught and released six browns & one small rainbow from ten hook ups with the best brown going 520 grams. In my 53 years of trout fishing this is the first time I have ever stood in the one spot and hooked into that amount of trout in any of the rivers I've fished.. I noticed the clouds were now breaking up and the sun was starting to break through, once it hits the water the fishing will slow down.

There were insects starting to appear above the water surface which has brought a few trout on the rise, plus the caddis moths were now hovering above the water as the air became warmer. I moved into a mix of slow to medium flowing water that had a couple of small fast water runs in them. I picked up three more well conditioned browns in them before reaching a very long & wide slow flowing stretch of river. An hour and a half of spin fishing this morning I've already caught & released a total of 20 trout, doesn't get any better than that.

With the sun now full on the river and I could see trout slowing moving around with some slowly coming to the surface sucking in small midges that had landed on the surface. I flicked the spinner up past them and slowly retrieved it with out any takers, a few did turn and follow the lure but that's as far as it went.
I tried several different hard body lures and had plenty of follows with just the one trout giving one of the hard body lures a nudge out of interest. I went back to the Aglia, this time I went for the black blade to see if that would get a positive result. It worked for a short time in catching two more browns with it at the top end of the long stretch of river.

Then the trout lost interest in it so I went back to the gold Aglia and that got them going again but not as frequently as earlier this morning. I could only manage to catch another six browns from eight hook ups in the fast water runs before I called it a day because it was getting too hot (26 degrees) and it was all open water in full sun ahead of me from here on. So my spin session ended with 28 trout being caught & released from 36 hook ups over three hours in the river. The majority of the browns were in the 400-460 gram range, it's been good to see so many well conditioned fish in the river this season.. With some good rain forecast over the next few days is good news because this will give the rivers a lift and I'm sure it will also be better for trout fishing too, especially in the smaller streams. 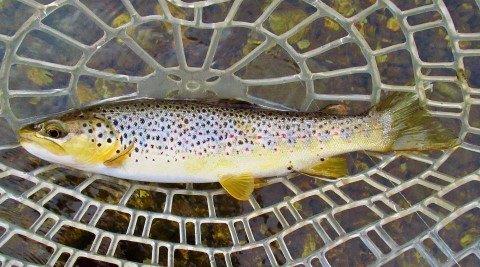 Best trout of the session 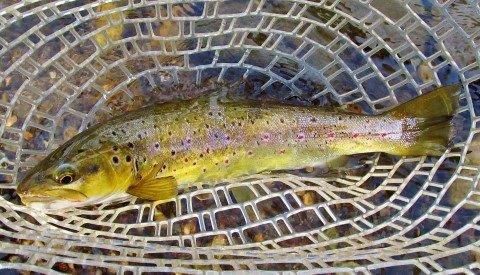 Great colours in the trout 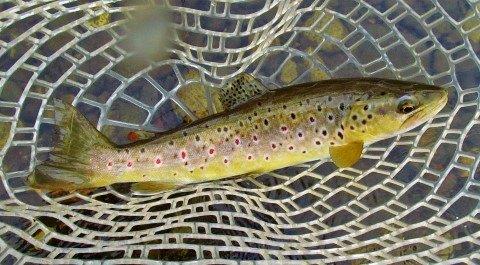 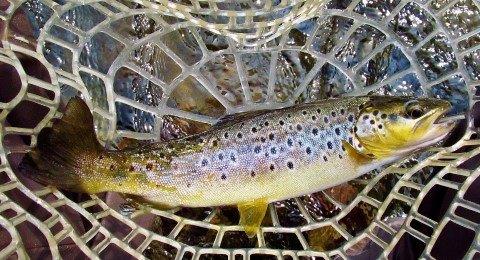 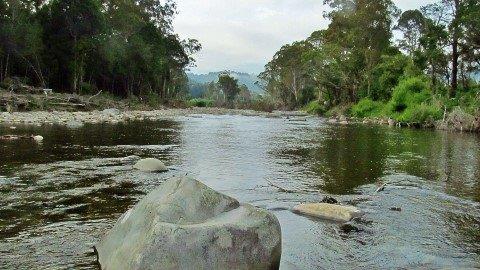 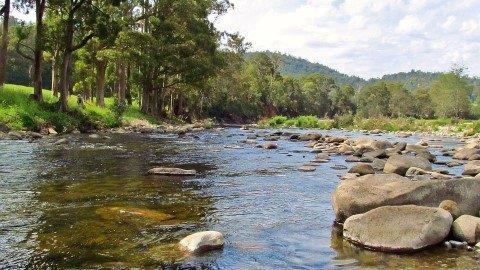 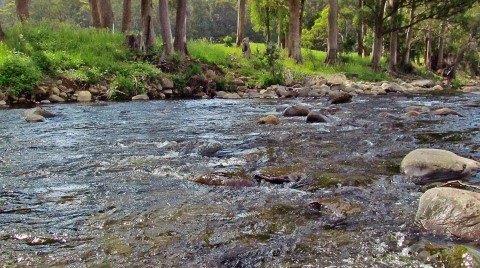