Perfect weather conditions for trout fishing today saw me head to the upper reaches of the Mersey River chasing the trout. It was a dull overcast day with a light shower of rain every now & then, it couldn't have been a better days for chasing trout. The area I headed to is probably one of the toughest to get to and also not the easiest on the body either.

The river bottom is always slippery, even worse the rocks roll under foot making it so hard when wading up the river. Just staying upright in the river is a bonus. In saying that, the fishing has been great for the majority of trips I've had here, it can also have it's off days too. Those off days are usually when the river is low and clear with full sun on it. Today is the ideal day to fish this area, it's in these humid, damp conditions when this area fishes really well. I arrived at 7:50am then headed off to the river,I started fishing just after 8:30am.

The river was running at medium height and clear so I started off using the Aglia Furia, it's the spinner that's been doing very well on the trout on quite a few trips.. The first area fished was a medium to fast flowing stretch of river where had several follows but no takers until I moved into another stretch of faster flowing water. There I picked up my first wild brown trout of the morning, a small (280 gm) fish which was disappointing. For some reason the trout in the rivers this season have mainly been small fish with very few large ones being caught & rarely seen. My best trout so far this season was a 1.4 kg brown taken in the Meander River back on the 21st September, though I have hooked and lost the odd large trout from time to time during the season.

The next stretch of river fished was a long six hundred meter shallow fast water, one that always gives up more rainbow trout than browns.. By the time I had fished two thirds of the way up this long stretch of river I had only landed five small browns from eight hook ups. I did try a brand new gold #0 Black Fury spinner in that stretch of river, I hooked and lost a couple of trout on it so I went back to the Furia. The biggest surprise was not seeing or catching a rainbow trout in that fast water run. The last third of that fast water was very shallow, the algae on the rocky river bottom kept fouling the Aglia spinner blade which made me bypass most of it. With that fast water out of the way I moved into another long stretch of river, this was a wide medium flowing run, I did have two takes on the Furia but lost both fish.

It was time to try a small shallow floating hard body lure, I picked up a three small browns on it. The reason I went for the hard body there was because it was more suitable for fishing that long wide stretch of water. Over 85% of the trout I catch are taken on the Mepps spinners, but there are the times when even I have to use a hard body lure. To catch trout I do have to make changes to suit the areas & conditions I fish. Not only that, the trout are very often fussy what to present to them in different stretches of water too. One stretch they'll take what ever you throw at them, the next will be entirely different. They will only take a certain coloured Mepps spinner or hard body lure and that's what make trout fishing such a challenge.

Yes, trout fishing can be frustrating at times, but there's nothing better I like doing, that is to out smart a cunning brown trout.. I was now back into the faster flowing runs, it was straight back to the Aglia Furia which was soon right back into the action. The very first cast directly upstream result in an instant hook up from a solid brown. This was the fish of the day by far, it made a fast run down & across the river then as it leaped from the river it tossed the spinner. I couldn't believe what had just happened, it would have been in the 600-700 gram range too. Still, it's not the only one I had lost today, just a shame a fish of that size was added to my list of trout hooked & lost.

I continued fishing my way upstream picking up a small brown here and there when I caught my first and only rainbow (290gm) trout for the session. The rainbow took my caught and released total to thirteen trout. I still wanted to catch a few more over the next couple of fast water runs before calling it a day, that didn't happen. All I managed to do was hook and lose another two trout, that took my hooked and lost fish to fourteen. I felt it was a pretty good three & a half hour spin session, just a shame that the hooked & lost trout outnumbered the caught & released total... 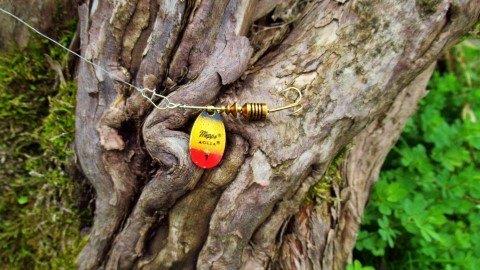 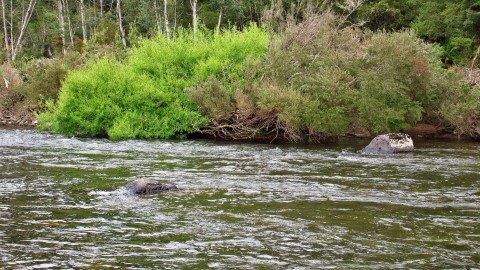 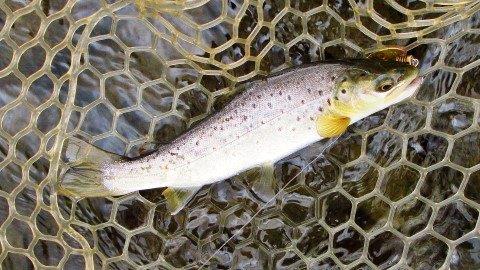 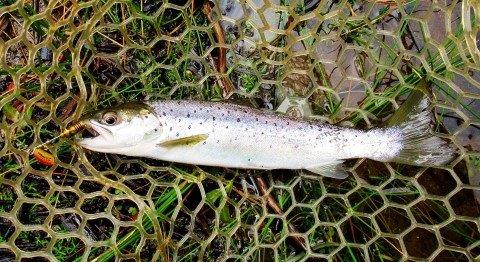 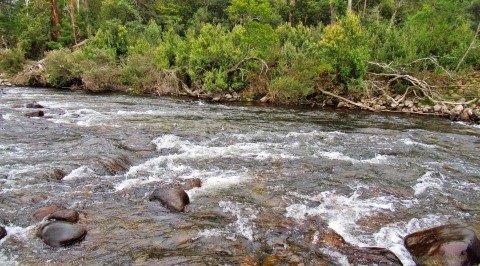 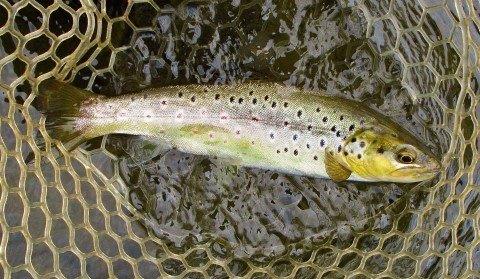