Hit the Mersey River just on 7:00 am in what was cool foggy conditions to start with, but a good mild 19 degree day was forecast. My last trip here was back on the 5th December when I had a tough spin session chasing trout in similar conditions. As soon as I hit the water I could see plenty of trout on the rise in a wide long slow flowing flat water which meant I was in for another tough spin session. I fished a short fast water to start with just like I did on the last trip with the same result, no fish. As I headed into the wide long stretch of river with the fog slowly lifting there was a line of trout rising ahead of me which was quite good to watch. Trout were rising everywhere,

I couldn't believe the amount of fish that were surface feeding here today. The majority of them appeared to be small/medium size fish, I did notice a few large fish breaking the surface in different areas on the river too. I was using my new Action video camera today for the first time and was finding it hard getting used to having the extra gear on the front of my waders. Getting the camera in the right spot was the problem because where I set it up was normally where I had my Canon photo camera. I just hoped it would get the footage what I wanted when I hit the remote control.. I still had a go in the slow flowing water with the #1 Aglia Furia in the hope there may be one or two trout that will have a go at the spinner. I did have a few follows from some small browns over the first fifty meters of river when I thought I'd try a Mepps Bug spinner in the stone fly pattern.

The reason I went for the stone fly was because it was black which is a good colour as it matches the black spinner insects which I saw hovering above the water. The fog had lifted and the river was now in full sun, so the black coloured Bug spinner could be a good choice. Just ahead of me there was a fallen tree partially laying in the river & spotted a trout surface feeding close to it. I thought if I'm to catch a trout in this slow flowing water then this is the area I'll pick one up. I lobbed the lure within six inches of the fallen tree, one turn of the reel handle and the lure was taken by a solid trout. It put up a great fight too, leaping several times before I was able to slip the net under it. It was a beautiful conditioned brown and solid as a rock, it weighed 710 grams, it was released back into the river no worse for wear.

The bug spinner had done it's job well, so it was back to the Aglia Furia again as I headed off to the fast water runs. They were a little slow to start with before I picked up my second brown trout of the morning with a long cast into a flat water on the opposite side of a fast water run. I fished the last six fast water stretches where I caught & released four more browns from five hook ups before heading back to the car. Once back at the car I wasn't satisfied with catching six trout here again for the second time, so I headed off on a 3/4 kilometre walk to another fast water run downstream where I caught & released two more browns from three hook ups. That was it, my day was done, eight trout was a fair score given the tough conditions for spin fishing today. 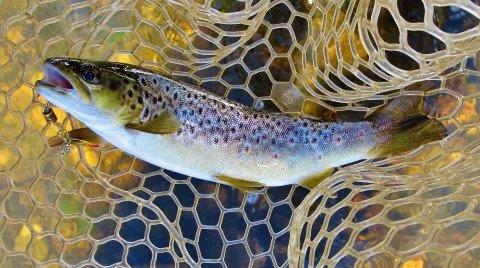 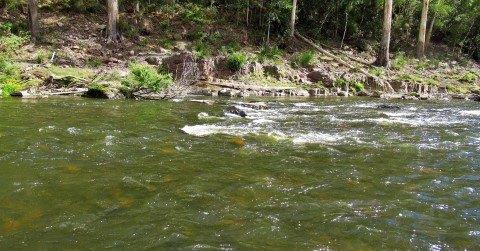 Another trout taken from this fast water 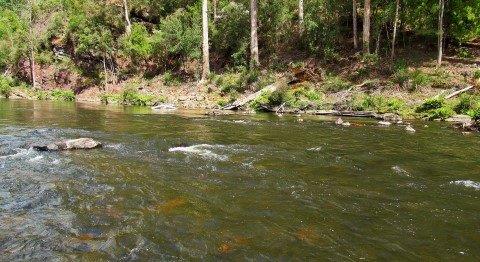 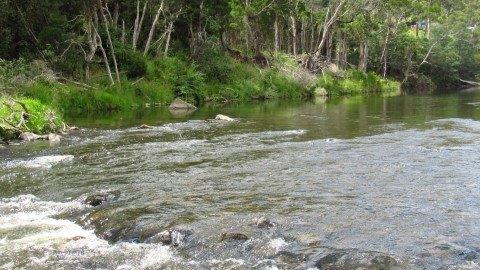 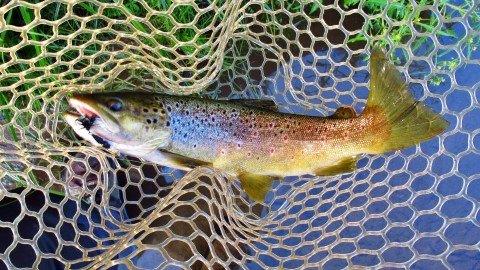