With poor weather forecast later on this afternoon & with the conditions being overcast & cool this morning I thought a trip to the upper Mersey River may be worth the trip. Half way to where I was heading I came across some light fog which I didn't mind as it meant there wouldn't be any sun on the water for an hour or two. I hit the river at 7:10 am and the first thing I came across was water weeds & plenty of it. Not the ideal thing one wants to see when lure fishing that's for sure as it restricts the fishing quite a lot.

I was starting the session of with the Mepps #1 March Brown bug spinner to see if it may attract a trout or two, it did the job in the Meander two days ago so why not try it here. The water was clear and glassy, there were plenty trout feeding on a massive hatch of midges that covered the wide slow flowing water ahead of me. With thousands of these small midges floating on the surface as well as in the air, the trout were going to be hard to catch this morning.

I started off fishing a small fast water run but the spinner kept getting fouled by the thick water weeds, my size one spinner was too heavy for fishing here today. I had to make a change, I went for a size 0 black blade Aglia Mouche Noire which is a little lighter in weight. Even that spinner was getting fouled so I decided to move into the shallow wide stretch of river in the hope one of the surface feeding trout may take the spinner.

Fishing this wide shallow water I had more choice of where I could cast the spinner, I could pick the waters that had space between the water weeds. I found the left hand side of the river was the better side to fish as it had less weed growing in it, that's where I concentrated my fishing. I didn't have a choice of casting across the water then retrieve the lure, my only option was casting the lure straight up the river then retrieve it straight back down. It's the type of fishing I'm not keen on as one tends to lose too many trout when fishing this way, most trout hit the lure on the turn and are rarely well hooked. I did have several follows on the Aglia Mouche Noire without any hits, I tried three different coloured Black Fury and small plain Aglia spinners all with the same results.

It wasn't looking good, I was really looking at having a donut day for the second time this season. Out of desperation I thought I would give a #0 copper blade Aglia Mouche Noire a go. Being a brand new spinner the copper blade was quite shiny I placed a black fury sticker on the blade. With the water being so clear I felt the black sticker would cut the reflection down a little as not to put the trout off. It worked, three casts later I had my first trout of the morning in the net, a nice 310 gram fish.

A little further up I had a couple more trout dart at the spinner only to have them miss getting hooked. As I slowly moved up the river I spotted a large fish surface feeding in the shallow water close to the river bank. I flicked the Aglia spinner a couple of meters passed it then retrieved it at the same time giving the rod a light twitch to make the spinner blade flutter. No sooner had the lure reached the area where I had seen the trout a bow wave rapidly appeared behind the lure and it was fish on. It was a decent sized brown that took the spinner hard & fast, it darted every which way at the same time putting in some solid head shakes.

The trout did all it could to toss the spinner but couldn't, the fish eventually tired enough for me to quickly slip the net under it before it had the time to make another run. It was a beautiful solid male fish that went 690 grams and was in top condition, after a quick photo it was released back into the river. That was the last trout hooked for some time until I reached had another fast water run where I hooked and lost two very small browns. Not long after losing those two trout I caught & released a 290 gram brown in the next fast water run. After two and a half hours in the river with just the three trout being caught, it was time to call it a day. 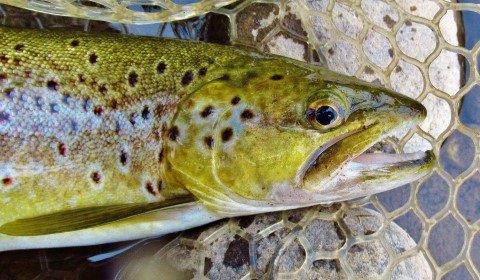 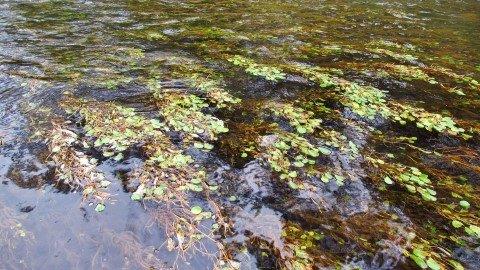 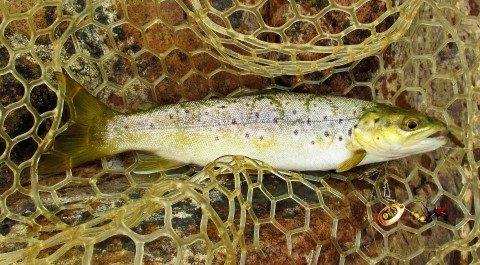 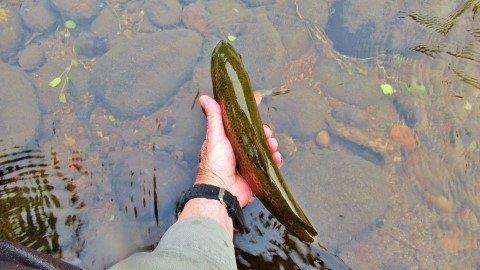 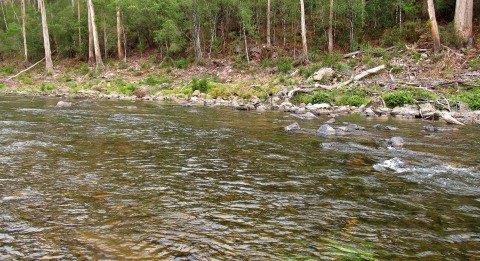