With another change due plus not having wet a line for a week I headed back to give the Mersey River another crack, this time I was there much earlier too. Still a little later than I would have liked given the conditions were nice and cool as well as being heavily overcast it was the perfect morning to be chasing trout in a river. The river level was around the same height as the last trip and it was still running nice and clear, I felt the fast water runs would be the ones that would give up the trout again today.

The first one I fished using the cast and drift method with the Aglia Fluo brown trout spinner didn't give a yelp, not a sign of a fish in it. Ahead of me was a very long wide shallow to medium deep slow flowing stretch of water and with it being overcast I thought it was worth flicking a lure into. As I was making my way upstream there were several quarry trucks carting road material up and down the dirt road than ran along near the river and the amount of fine dust they created was drifting across the river and it started to effect my eyes. It was like a very fine gritty bull dust, all I could do was to wash my eyes with river water every so often. My eyes became very sore and irritated, at one stage I was about to call it a day because of it but I decided to push on.

I had quite a few follows on the fluo brown trout spinner but no hits so I tried the Aglia Furia, gold Black Fury, Bug March brown model all with the same results. It was quite frustrating having follow after follow from the trout without any signs of aggression, I kept saying to myself just be patient and continue to do what you're doing. Another change of lure was in order and this time I went for the Stone Fly Bug spinner, a long cast I lobbed the spinner close to the right hand river bank, three turns of the reel handle the lure was taken hard and fast, it was fish on at last. It was only a medium size brown but it was well and truly hooked and I soon had it in hand. Really it hadn't taken all that long to catch the first fish either, twenty five minutes was all it had taken since I hit the water. The further I got up the river the less dust was drifting across due to much higher river banks that were lined with tall eucalyptus trees and dense foliage, plus the road turned away from the river here too.

I continued fishing my way upstream towards the fast water runs and tried a variety of Mepps inline spinners and several hard body lures, all I could manage was a couple of follows which was pretty disappointing. The cloud was now parting ways as the sun rose higher in the sky which meant the wide clear stretch of water would soon be in full sun, not good for spin fishing at all. It was 9:10 am when I reached the first of two decent fast water runs and it was here I hooked and lost a very small brown using the Aglia Furia spinner. That was the one and only trout hooked and seen in both of those fast waters. Ahead of me was another long wide medium deep stretch of water which I decided to bypass and go straight to the long fast water runs, that's where I felt sure I'd pick up a few trout.

This fast water I moved into has never let me down in all the years I've fished it, so I was pretty confident of catching a few trout. Trout sit in the flat waters close to the river banks, behind large rocks and boulders in the river and that's where one has to lob the lure. I stuck with the Aglia Furia because it's a top lure for using the cast and drift method and a lure that always does well when fishing the fast water runs. It did take a few casts and drifts before a small brown took the Furia, trout number two was finally caught some two hours after the first fish of the session. After the release of that little brown the trout fishing picked up when I caught two more in quick time, suddenly I had three trout caught and released in ten minutes. Five minutes later I was onto another fast water brown, four trout in fifteen minutes and six for the session, how fast it can all turn around in such a short time.

I was quite happy with the half a dozen trout and was about to call it a day due to my eyes still being very sore and no amount washing them with river water was helping out. With quite a bit of fast water still un-fished I continued on for another forty minutes and picked up two more small browns from five hook ups. My day ended with eight trout being caught and released, a slow start that finished with a rush of aggressive fast water wild brown trout. Instead of walking back along the rocky river banks I thought I would head inland where I knew there was a nice flat grassed area where I could make my way back to the car, much easier than walking the rocky river banks. To get to the grassed area it did mean for a short twenty five of easy bush bashing and well worth the effort. Of all the areas I happened to pick to get through I was only a few meters into it when I spotted a large tiger snake a few feet ahead of me. He was just as startled as I was and thankfully it darted off to the right of me and I had to head to the left to reach the the grassed area for the easy one and a half kilometre walk back to the car.. 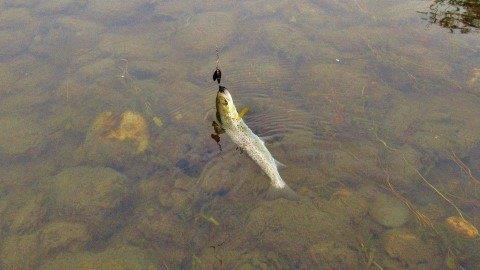 First of the day 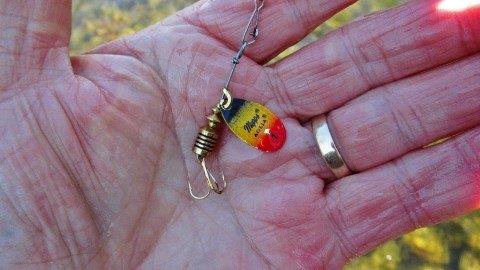 The spinner tat did the job today 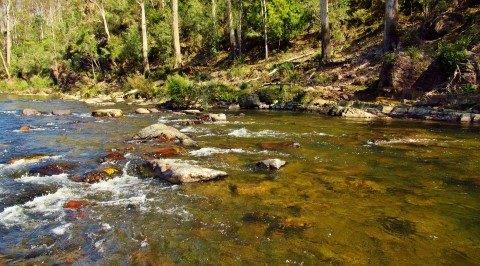 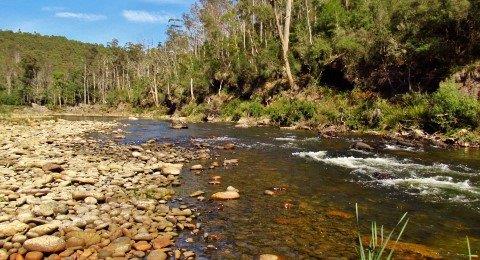