Another top day here in Sheffield today with a maximum temperature of 22 degrees followed up with a gusty South Westerly later in the day, a good day to hit one of the larger rivers again. This time it was the upper reaches of the Mersey River at Weegena that I headed to for the second time this season. My last trip here was quite a while ago, that trip was a real fizzer with just the one brown trout caught and released. I arrived at 7:50am and was in the river by 7:56am, the water was running very clear so I started the session off with a Mepps #0 Stone Fly Bug spinner.

Once thing I couldn't help but notice was the amount of duns that were hovering above the water, they were everywhere, this was going to make for a tough spin session because the trout will be concentrating on surface feeding. I could see trout surface feeding in most sections of the slower flowing stretches of water above and below the bridge. Three minutes later after a cast and drift I had the first fish in the net, a nice well conditioned rainbow trout was the first trout of the morning. That was my first rainbow trout for the season as well which was good as they've been few and far between in this area over the past couple of seasons.

A few mores casts and retrieves drew the attention of a large brown trout, that fish sat back behind the spinner without having a go at it. Seeing that large trout made me change lures, I went for a small brown trout hard body that a member from the strike & hook fishing (Sth Aust) site made. I worked several areas off the river with it for just the one hook up from a medium size rainbow that I lost as quickly as it hit it. I fished this area for another five minutes without a sign of a trout so I moved onto the next run of water. While I slowly made my way upstream I could see trout surface feeding everywhere, small-medium browns in the 280-380 gram size and several larger fish around 800 grams were having a ball on the insects that were on the water surface.

I tried several different Mepps models & blade colours, all that happened was follow after follow from the trout until I went back to the Stone Fly Bug spinner. Three or four casts was all it took before I was onto a trout, one that took me by surprise because I wasn't expecting a hit in the slower flowing water. This time it was a brown trout that took the Bug spinner, not one of the larger browns that I had spotted surface feeding, just a small size 280 gram fish. It had taken thirty five minutes to pick up the second trout of the session, like I stated earlier, it was going to be a tough day chasing trout with them surface feeding. I don't know how many casts and retrieves I had in between the first and second fish, but it was a lot that's for sure. I fished shallow waters and deep waters all with the same results, plenty of follows but no takers until I went for a change of lure as I moved into another deep run.

The lure I went for was an old beat up hard body, one that had been broken in half that I filled with araldite then hand painted. It was a small 40mm lure that had a great action and has caught a lot of trout in the past. I've carried it in my fishing vest for a long time (two trout seasons) since I patched it up and this is it's first time back in a river. Finally after several casts and retrieves in this deep medium flowing stretch of water the little hard body was snapped up by a solid brown. This fish would test out how well I put the lure back together, would it part ways where it had been broken in half or would it hold out. The lure did it's it's job and held itself together, the trout stayed on all the way to the landing net. Once weighed in the net the trout only went 320gms, so far it was the biggest trout of the session, it was also the third trout of the morning and was caught fifty five minutes (9:40am) after the second trout.

When the fishing is tough like today it's just a matter of being patient because there's always a trout that will eventually take a lure. Ahead of me was a couple of decent fast water runs, it's in those fast waters I was hoping to increase today's catch rate. To cut a long story short I went back to the Stone Fly fly spinner to fish them, the trout were few and far between too, all I did was to catch and release two small rainbows from three hook ups, the first on was caught at 10:10am and the second one at 11:15 am. The last fast water I fished was a reasonably long one, half way up it and after catching the last small rainbow and losing one other my mind wanted to go on but my body didn't. I could have pushed on and probably would have had the trout been there in good numbers, I knew I would struggle to catch any more so called it a day at 11:30am. With three rainbows and two browns caught and released it wasn't all that bad given the conditions with the trout full on surface feeding. 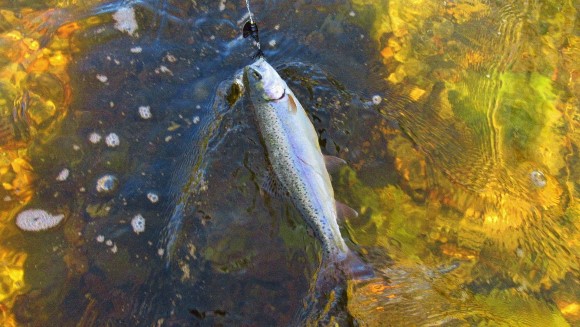 Another rainbow falls to the bug spinner 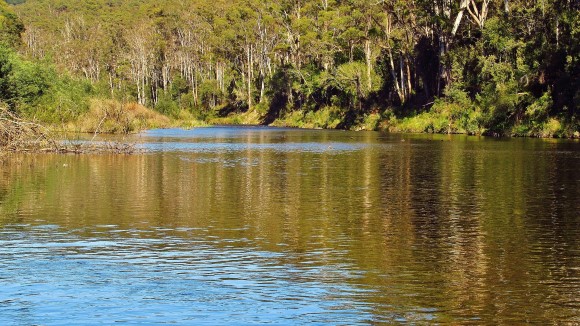 Calm water on the Mersey River 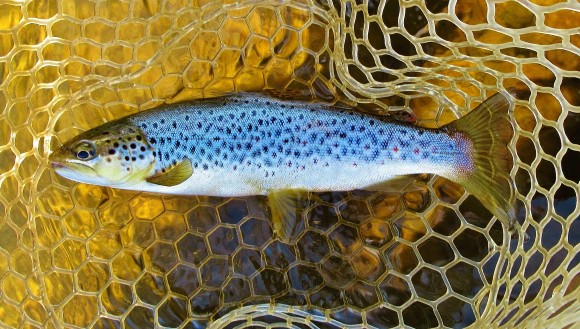 The best trout of the morning 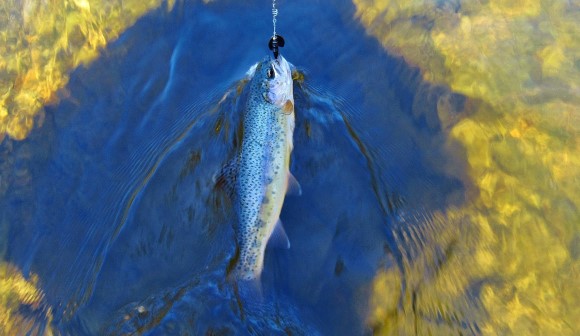 The smallest trout of the session 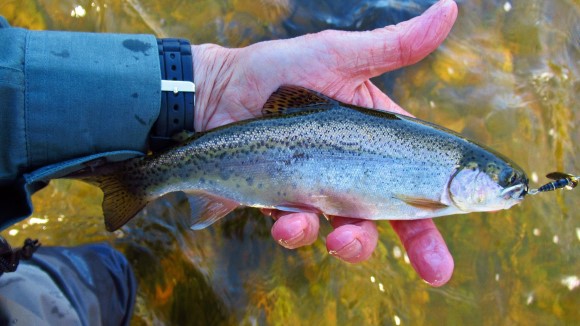 The stone fly bug did its job on this trout