About NOT fishing the Meander River 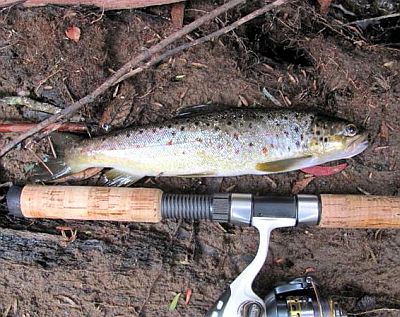 About NOT fishing the Meander River

What a waste it was - a morning drive to fish the Meander River. It was a nice a day for fishing too. On arriving at the Meander about ¾ km above Barretts Bridge on Longridge Road I slipped into the waders and made my way down to the river bank. Just as I was about to slip into the river I could hear a noise coming up the river.

It was like wind gusts roaring along. I waited and then I saw that it wasn't wind at all, but around 50 or more cormorants heading up the river about three metres above the water. There were lots of young ones in with the older birds as well and I sat there in disbelief of what I had just witnessed.

So I put the rod back into ute as I knew it would have been a waste of time fishing the river now, and it was out with the thermos and time for a cuppa. I sat there for around 45 mins then the sound came again this time it was from upstream, so I slipped into the river and made my way out to the middle of the Meander and thought I could pelt a couple of rocks at them just to upset the bloody things.

As they approached me they rose up high and started to drop their catches of fish which they had taken out of the river. Some of these fish were up to 350mm in length, I picked 9 out of the river of which 8 were revived and swam off okay the other didn't survive (see photo). I don't know how many others were dropped but there were quite a few. I didn’t see them come to the surface so they may have survived – hopefully?

These cormorants are now in plague proportions along this river and something has to be done about it right now before it's too late and there are no fish left in it.

The mind boggles to wonder how many fish have been taken out of the system and even worse how many of these fish are carrying eggs for the spawning season ahead. I have seen many cormorants on other rivers that I fish such as the Leven, Minnow and Dasher rivers to name a few. How many fish have been taken from these as well? It makes you wonder doesn't it and how long is it going to be before something is done about the problem. It will be like the spread of the blackberry bushes across the state...... "'BUGGER ALL UNTIL THE NEXT ELECTIONS'" Well that's my bitch for the week, please have your say if you’re experiencing the same problems where you fish too.