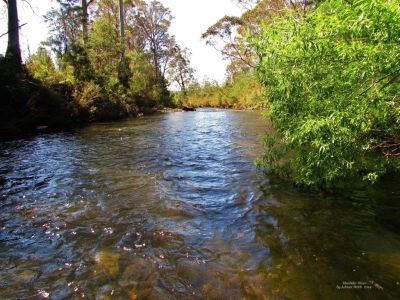 Today we were greeted with a medium 10 knot Sth Easterly breeze and another afternoon trip was on the the way. This time it was to be a stint on the Meander River above Deloraine. Once there I was happy to see the river level was down by around 125mms lower than my trip here a week or two ago and it was just about the right height.

Yes, I stayed with the little #00 copper Black Fury too and it only took a couple of casts to the opposite bank before I had my first fish on for the day. Not a big fish, but a small (260gm) brown that was soon wound in and released. Well, that was the only fish caught until I came across another small fast water section were I picked up two more small (290gm) browns. I had now covered some half a kilometre of river for only three fish. I was expecting more than that to be caught over the distance covered, but beggars can't be choosy and three was better than none I suppose.

I was still hoping for a bigger fish on the two pound line as well, but that didn't look like happening at this stage either. I worked my way on up stream and managed another two small browns and lost two others before it all came unstuck. The last run of water that I was fishing I hooked a nice solid brown that tossed the spinner after the second jump which didn't impress me too much. This was the best fish of the day by far and it tossed the hook. Two more casts into the top end of the run and I was on again and this time it was a solid rainbow that was around the one and a half kilo mark. Yes, at last a decent size fish on the two pound line.

It made a couple of really hard runs and I had the fish pretty well under control as the drag was set just right and I was gaining some ground on this rainbow. Then it all happened, disaster struck!!

Some how the line had a loop in it and then the line became wedged in the small line holding clip on the side of the spool. Then all of a sudden it was over, Snap!! The rainbow had one out, and all because of that one little stuff up. Well, I can write what I said and how I carried on after that as I would get banned from the site for a few weeks I reckon, but let's just say I wasn't a happy chappy.

Over next couple of hundred meters of river and still pondering over the loss of that rainbow I did catch and release one more small (270gm) brown. I fished on for another half an hour without having a hit or a follow before finally getting out of the river and walking some one and a half kilometres back to the car. It was a day than could have had the perfect ending, but it wasn't to be.
But it's not the end of the world, there's always another day and another challenge isn't there, and that's what makes fishing so great. Whether it be in a river, lake or on the salt water it's all about enjoying what we have around us and making the most of what we have.

PS: The line clips have since been removed from all of my trout reels and spare spools.
Cheers
Adrian 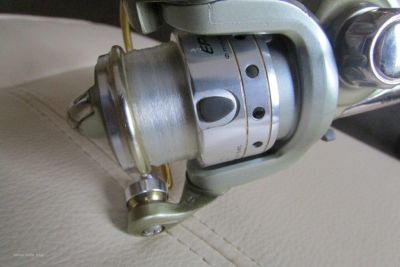