After checking the BOM river heights I saw that the Meander River had dropped 50mms since my last disastrous trip there with just the one trout being caught. I thought with it being lower plus the air and water temp on the rise it was worth another visit. My only worry was the East/North/East winds that were forecast for most of the week, not a good wind direction for fishing. It's okay if it's just a very light breeze but once it picks up one may as well head for home. Today's weather conditions were ideal with it being a dull cool to mild overcast day & the lightest of an Easterly breeze. Being so overcast I didn't hit the river until around 10:00 am and commenced casting the Mepps Aglia Furia around in the clear cool flowing water. It was quite nice to finally be fishing the river at the perfect wading height for a change..

I was ten minutes into the spin session when I had my first follow from a medium size brown, that's as far as it went. No sign of aggression at all from that trout as it slowly came up behind the spinner before it turned and moved off.. A little further up I was fishing a fast water run that flowed over some long rocky ledges, it was there where I had a hit and miss from a medium size trout. From there on it was all downhill as I rarely spotted a trout over the following eight hundred meters of river and several changes of spinners & hard body lures. I was totally frustrated to why the trout are not here in good numbers any more.

After having two more light hit & misses I made the decision not to fish on any further here, I was going to try another stretch of river a couple of kilometres further upstream. I took a shortcut by crossing the river and bushing bashing my way up a steep incline that took me to a dirt road and back to the car. By hell it was a steep incline, half way up I was just about knackered, but I did eventually reach the road... Once back at the car I was still feeling ticked off with how the river is so depleted of trout at this stage of the season. It was then I decided to head over to Western Creek and give that a fish on the way home instead of fishing the Meander further upstream.

Knowing that it would more than likely be running low I still felt it was worth a shot any way. When I arrived at the creek I was right, it was running low plus there was a lot of algae on the bottom which will foul the lure on the retrieve when it get close to the bottom. With the creek being so low I went for a small 1.5 gram Mepps #00 gold Aglia, it was on the first cast and retrieve when a small trout took the spinner. It was a juvenile trout, but at least it was a fish which was more than I'd had all morning. After that I had a couple of follows from larger trout but they wouldn't take the lure. I tried several other different coloured black fury & aglia spinners with the same result...It was now time to try a small hard body lure,

I went for one that I had dobbed a few small red dots on to make it look like a small brown trout. I came to a large deep pool (actually it's the only one on the creek) and had a few cast and retrieves with the little lure when I had a follow from a small trout. Just as I was about to lift the lure from the water it had a go at it but misses the trebles. I had a few more casts into the pool and had that same little brown followed it. Once past the pool I was back into the main creek, a cast to the top end of it resulted in an instant hook up, I had my first decent size trout on. It made a few short runs and leaps from the river before it tired and I slipped the net under it.

It was a nice clean well conditioned 310 gram fish that was soon returned to the creek. The next run I hooked and lost another brown, two casts after losing that fish I had another one take the lure. This fish was a little bigger than the last one, it too was in top condition and went 330 grams... It looks like the decision to give the creek a fish was the right one after all. As I continued fishing my way up the shallow creek the algae kept fouling the lure on a regular basis, it was becoming quite annoying. I wasn't quite ready to give it away while I was still having several follows from trout, plus a couple more hooked & lost fish. The further I fished my way up the creek the shallower it became and the more my lure was being fouled by the algae, After catching two more medium size browns I called it a day. During my time in the creek I finished up catching and releasing five trout with four of them being in the medium size range, I was happy enough with that. 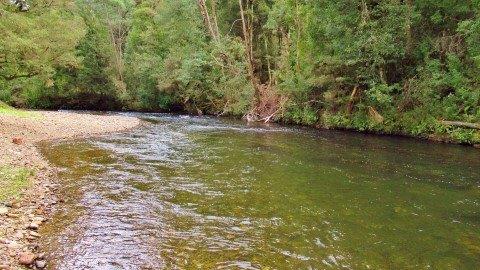 Looks fishy but they werent here 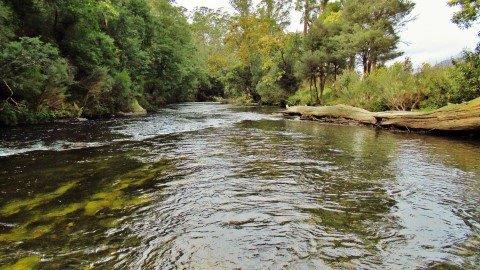 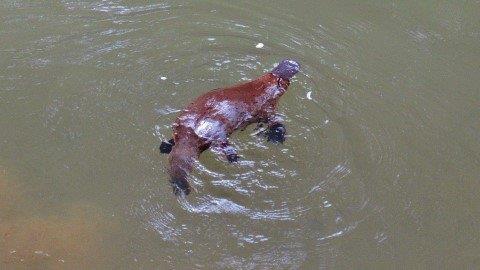 One of the local platypus thats in the creek 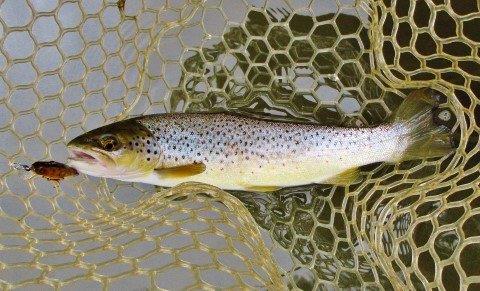 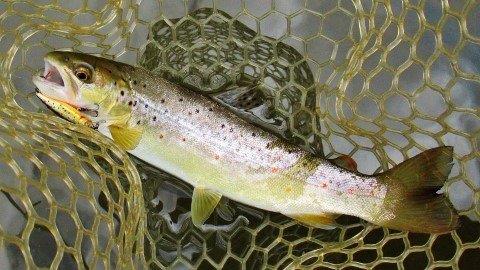