After having around 50 injections in my lower back, hips and left shoulder blade I felt good enough to hit the fast water on the Meander River. Before I left home I put several stick on heat patches on my lower back & took a couple of pain killers as well. Any way I arrived at Meander in thick fog, got the trout wading gear on and headed off to the river. When I arrived at the area I was going to fish I found the river was running a too little high and fast for my liking.

I did climb down the steep river bank and hop in the fast water to see what it was like, to me I felt it wasn't quite safe enough for wading. It was just above the knees where I was and the force of the water against my legs felt too strong to risk making my way out to the middle of the river. I've always stated in several trout fishing articles & reports that “One should never take any risks when fishing, no fish is worth drowning for”. Today was one of those days, I headed back to the car and drove to another very long fast water stretch that I knew was a much safer option. Even though there was still a fair amount of water coming down, the river it wasn't as rushing as hard due to it being at a lower gradient than the upper reaches.. I had lost thirty five minutes of fishing time when I finally entered the river at 8:05 am, good thing was the fog was still hanging around and the conditions were quite humid. Again I'm giving the Okuma Helios SX-20 spin reel & the Okuma Celilo 6'6'' ULS 1-3kg trout rod a good work out & started the session off with the copper Aglia Mouche Noire.

Five casts up and across the river was all it took before I had my first trout take the lure, like most of the trout caught in the river this season it was a small fish. A little further up I caught another little brown, that was followed by two more hook ups of which both fish tossed the spinner. After that I caught six trout in a row that included two rainbow trout which was a nice surprise. I have caught a few rainbows in the Meander on and off this season but not in big numbers or size, I'm hoping they may be breeding in the river. Fishing that first five hundred meters of fast water was pretty good as rocky as it was, it wasn't all that slippery under foot. There were several areas that it was a little tricky when the rocks seemed to continually roll under foot but I managed to stay upright.. It was the following kilometre of river that's always been the toughest to fish & also the toughest on the body. There's a lot more short fast water runs and a lot more large boulders and rocks to get around, there's was a lot of good looking trout water there too so it's worth the pain.

As usual I used the cast and drift method here and picked up two browns in quick time with one of them going 540 grams, it was in top condition and a beautifully coloured fish. After that I had a few follows from trout on the copper aglia before I caught two more small browns on it before they went off the copper colour. The fog had lifted and the sun was now starting to hit the river, so that would have had something to do with it. I went for a change of lure, it was the #0 Aglia brown that went on, it wasn't long when I hooked and lost three trout in a row before one was well hooked & landed thirty minutes later. That was also trout number thirteen which had taken such a long time to catch, getting off it wasn't any easier either.

After another change of lure which was a small #00 well used gold Aglia, it took another thirty five minutes and four lost trout before I number thirteen was wiped off the slate. Yes, at last the fourteenth was in hand, photographed and back in the river, my day was done. I was totally done & dusted, my body had taken enough punishment in stage two of the spin session. The cast and drift method worked a treat as it always does when fast water fishing, the well balanced light weight Okuma rod & reel trout set up stood up to it as I had expected it would. The Mepps Aglia spinners used today did their job on the trout as they always do. That #0 Mepps Aglia Mouche Noire spinner is the only one I have in that size and it is very well worn, how much longer it will last I have no idea. One thing I do know, it's certainly done a brilliant job in catching trout so far. 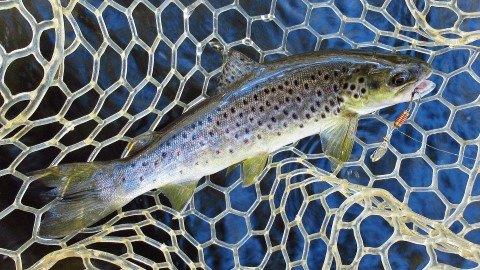 Another brown bites the dust 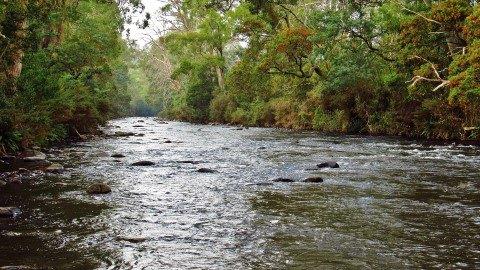 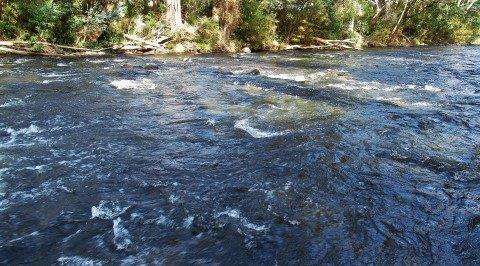 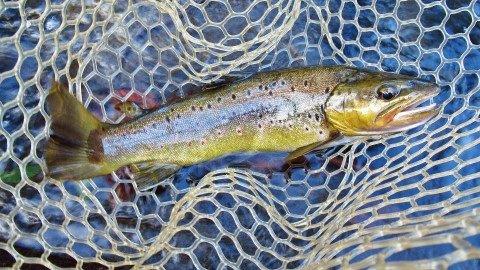 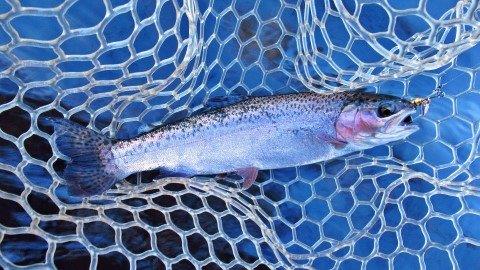