Back to the fast waters

After missing out not having a spin session yesterday, this afternoon I decided to head back to the fast waters of the Meander River. It was 2:25pm when I hit the water in what was perfect weather conditions with a light breeze and patches of scattered cloud.

The river level was a little lower than my last trip here, it was still running nice and clear, lure of choice for starters was the #1 Stone Fly Bug spinner. The first area I fished was a large wide deep stretch of medium flowing water, it was here I had a follow from a nice brown.

Not long after that in the same water with a cast directly upstream with the Bug a solid brown took it on the retrieve. The brown made a couple of decent runs and leaps from the river, it was the second leap when it tossed the lure after giving a solid head shake. From here on I was back into the rocky fast waters for around forty meters or so, there I caught four small browns on a #0 March Brown Bug spinner in reasonably quick time, forty three minutes was all it took to catch them.

They were all taken in shallow flat waters among the fast water that was really running hard across the rocky river. At the head of this fast water I had just fished was a very long (500+ meters) stretch of medium/deep flowing water, here I changed lures, I went for the little un-branded brown trout hard body, the same one I used here on my last trip. I worked every bit of water with that little hard body lure and it wasn't until I had reached the headwater when I finally hooked a trout on it.

This fish was lured from a narrow flat water close to the opposite river bank that had a nice bubble line running along the edge of it, that brown was just a medium size 310 gram fish and the fifth trout of the session. Three casts later in the same headwater I picked up another brown, this fish was much smaller than the previous one. Having caught and released half a dozen trout the trip here was worthwhile even though I had expected to have caught quite a few more trout by now.

Still, beggars can't be choosy and there's a lot of trout fisho's out there that would be happy catching half a dozen trout. With that long slow/medium stretch of river out of the way I was back into the fast water, where I was hoping to reach a double figure catch before my spin session ended. Not long after I entered the fast water a gusty breeze sprung up from the East, the only good thing about it was it was at my back. I had replaced the little hard body with the March Brown Bug spinner now I was fast water fishing again and it wasn't all that long before I had a couple of hits for one hooked and lost medium size trout.

The fast water I'm now in has some great flat water pockets behind the large boulders that are spread out in the river, great trout zones. It seemed like forever before I hooked the seventh trout of the afternoon, just a small 260gram brown. All that good looking trout water with hardly a fish to be had in it was a little hard to except..I know this area is been heavily fished now as are most of the good runs along this river, it's also quite popular with trout guides who are here on a regular basis now days.

It wasn't all that long after the release of that little brown when I had a long cast up and across the river and on the retrieve my reel tightened up, I couldn't wind the line in. What had happened was the line had somehow looped under the spool and wrapped itself around the reel shaft. I removed the spool only to find it was impossible to sort it out here so called it a day. How that happened I have no idea, it may have been caused by a wind gust that peeled extra line off the reel on the cast, something that can and does often happen in windy conditions.

Any way what ever caused it my day was done and dusted, I had a spare reel back at the car but was over a kilometre away and not worth the time getting it and returning back to the river. Perhaps I should go back to carrying a spare reel with me like I use to do a few years ago.. Two hours fishing the fast water with seven trout caught wasn't as good as I had expected it to be considering my last trip here my tally of trout caught was fourteen, that was also over three hours of fishing with more water covered too. 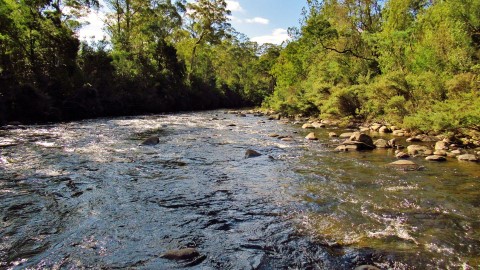 Not the place to take a fall 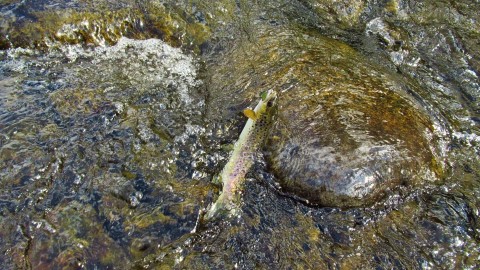 One of several trout caught and released 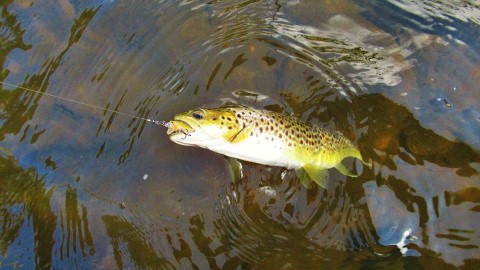 Solid brown that fell to a small hard body 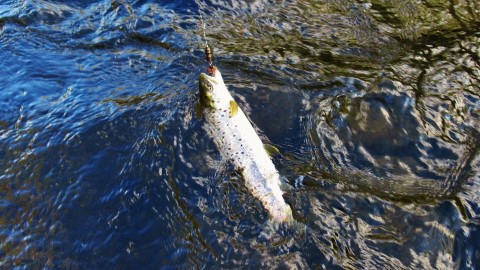 This brown fell to the bug spinner 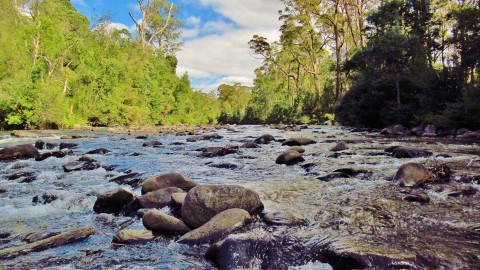