Meander trout go for the Bug

It was back to the Meander fast waters again this morning for another spin session to see if I can add a few more trout to my season's tally of 370 trout. I wasn't intending to fish the fast waters today mainly because of the right hip but then decided what the heck get in there and see how you go, if fishing there aggravates it then I'll get out and head to the slower flowing waters. The conditions were quite overcast and a cool six degrees when I hit the clear flowing river at 10:10am, the water temp was sitting on ten degrees and it was cold on the legs too. I started the session off with a small #00 White Miller Bug spinner, it's not a colour I would normally start off using but I wanted to see how it would perform in the dull conditions and clear water. Well, not a lot happened for around fifteen minutes or so before a cast directly upstream into a flat water a small brown took it. Two head shakes from that little brown and it was gone, it tossed the White Miller as quick as it took it.

That's something that often happens when casting directly upstream. On the retrieve the trout will dart up behind the spinner and take it as they turn, nine times out of ten they're just lipped as it doesn't take much to lose the fish. It wasn't very long after losing that fish when the same thing happened again so I decided to change over to a #00 March Brown Bug spinner. Why, because of it's duller light brown colour, I felt the trout would still have a crack at it because it's not as bright as the white colour. The trout will still pick up the vibe of the blade and they will have no trouble seeing the March Brown spinner in the clear water, it will appear more natural to them for this time of year being a similar colour to grasshoppers. Not only that the March Brown has done very well in these waters on other trips. I couldn't believe my luck, the first cast directly upstream the spinner no sooner hit the water it was snapped up by a solid brown, this time the trout was well hooked.

After a brief battle I soon had it in the net, a nice well conditioned 325 gram wild brown trout. After that trout seemed to come on the take, or had I come across an area where there was a few holding out in the fast water because I caught and released three trout in ten minutes, all with the cast and drift method up and across the river. It took another ten minutes before picking up my forth trout from a direct cast & retrieve upstream. Five minutes on and with a perfect cast into a flat water on the opposite side of the river I had a solid trout follow the spinner, I let the spinner drift with the flow at the same time giving the rod a light twitch to make the spinner blade flutter. That trout sat up close to the little March Brown then just as the line & lure were facing upstream it grabbed it, the fight was on. This trout wasn't all that small either, it was the fish of the day by far as it darted every which way trying to spit the spinner while at the same time making several leaps from the river. I wasn't sure whether or not to get the camera out and film it or wait until it tired and I had it in the net. I went for the camera and filmed it before leading it into the net, it was a beautiful fish and certainly the best one for a few trips. Once in the net I weighed it, the total weight including the net was 975 grams which meant the fish was 565 grams after taking off the 410 gram net weight.

This was my best trout since the twentieth of February when I caught a 1.04 kg brown in another fast water run further up this river. I was thinking of getting out of the river when I reached the cattle bridge some forty meters upstream until I caught the sixth trout just below it. It was then (11:50am) I decided to push on up the river to see if I could reach double figures before calling it a day. The hip was feeling a little on the sore side but still bearable as I continued fishing my way upstream, this long stretch of river above the bridge is a tough as it gets and there's no margin for error when fishing in it, one slip and your in the drink. It wasn't until I reached a deep water run near the pump house when I picked up my seventh trout after another spot on cast close to the river bank. This fish was the second best trout of the day, a nice conditioned plump brown that went 475 grams. From here on the trout were few and far between, it took twenty minutes (12:38pm) before I caught the eight trout, though I did hook and lose one a little earlier on.

The hip was really starting to ache now, I was a little hesitant to carry on slipping and sliding my way up this fast water but I wanted to reach double figures so I pushed on. It was just after one o'clock when I caught & released the ninth trout of the day, I was now only one fish away from the target I set myself. I continued on for another fifteen minutes fishing some beautiful looking trout water without a sign of a trout, I couldn't go on any longer, I was done. As much as I wanted to fish on I just couldn't do it, the mind was fine, it was the body that kept saying “give it away for another day” and so I did. Just on three hours spent fishing some of the toughest fast water fast water in Northern Tasmania for nine trout wasn't really all that bad in the end. The trout were few and far between for most of the river I covered today so the end result was probably better than I thought it should have been. Once back at the car I was talking to a chap who fishes this river on a regular basis and he's struggled to have a good consistent catch rate as well throughout the trout season too, so it's just not me who's had on and off days in the rivers. ** Equipment used: 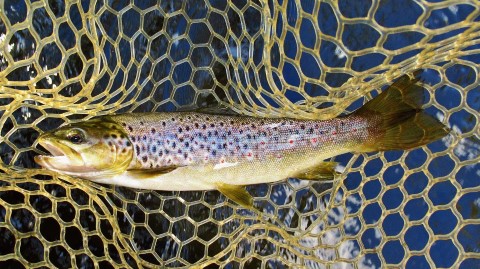 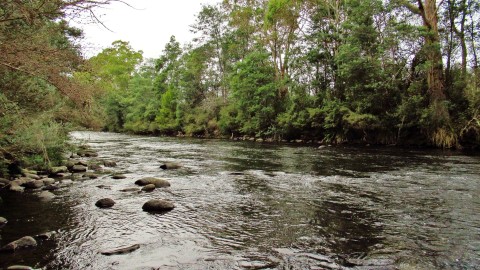 Good flow in the Meander 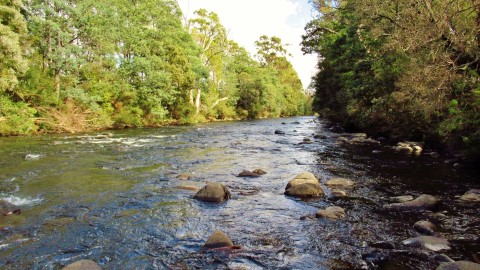 Rocky fast water and tough on the body 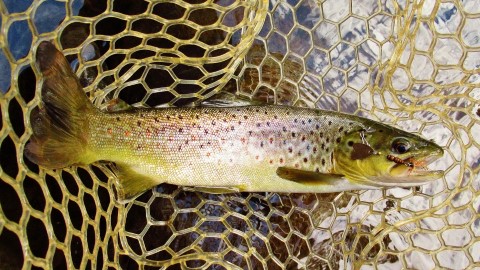 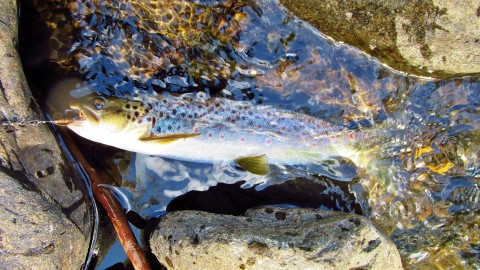 The March Brown sucks in another trout