Beautiful weather conditions forecast today had me heading off to the Meander River for a spin session, the river was running much higher than I liked but I was well overdue to have a fish in it. It wasn't an early start at all, it was just on ten thirty when I hit the river, the water temperature was a low four degrees which wasn't good to see. It was also running at 75cms which is 15cms higher to make for much easier wading conditions, care is a must in most fast water runs when it's running at this level. I would have liked to have given the fast water runs above the main road bridge but it wasn't safe enough for my liking so I had to settle for fishing a lower stretch of the river where it was much safer. My lure of choice was a Mepps #1 Aglia Furia, a great all round inline spinner that works well on the trout in most of the larger rivers I fish.

There were plenty of good runs today for casting and drifting here with the river running high, the only problem was the lack of trout to be had. Stretches of river that normally gave up one or two trout were empty, not a sign of a fish. I know the water temperature was low but I still thought there would be a few in this area. After nearly an hour of casting and drifting the Aglia Furia as I made my way upstream I decided to fish one more stretch of water before getting out and heading elsewhere. This last stretch of medium/fast flowing water is one that has never let me down, so I was quite confident of breaking today's trout drought. It was until I was half way into this stretch of water and cast the Furia close to the river bank on the right hand side of the river, as I slowly retrieved the lure at the same time letting the lure drift with the flow it was snapped up by a trout.

At last it was fish on, this stretch of water didn't let me down, after a thirty second or so tussle I had the trout in the net. It wasn't a large brown by any means, just a nice well conditioned fish that went 410 grams, the trout trout was broken at last. My next two casts were directly upstream into a small flat water near the left river bank, it was there a medium size trout followed the spinner all the way in, all it did was nip at the spinner without being hooked. My day here was done, it was time to head elsewhere. While I was making my way out of the river I decided I would head over to Western Creek and spend an hour or so chasing trout in it. I did check the water level on the BOM chart before heading off this morning and it was flowing at a nice wading height and the good thing about this little creek is that it has plenty of shaded along it. When I arrived at the creek I couldn't get a park due to someone who had parked a large four wheel drive at an angle that there wasn't enough room for any other vehicles, normally you can park three cars there.

Seeing as I still had my wading gear on I thought I would have a short spin session in the Mersey River at Kimberley on the way home. Once there I found the river was running a little high where I needed to cross over and I wasn't going to take the chance trying to make it to the other side of the river. With the little Dasher River being close by I thought I would give that a go instead., besides it is a lot easier on the body than the slippery, rocky Mersey River. The second cast and retrieve into it with the Aglia Furia drew the attention of a medium size trout and that's as far as it went. I thought it was worth going with a small hard body lure to see if that would suck one in, the first cast a small brown had a crack at it but missed being hooked. After that the little lure didn't attract anything so I changed to a #00 Aglia gold, another of my favourite well used spinners.

A long cast directly upstream into a fast flowing run the Aglia gold was smashed on the retrieve by a solid trout, this was the fish of the day. It was well hooked and made several leaps and runs before I had it under control and in the landing net. That fish went 415 grams which was only five grams heavier than the trout I caught in the Meander River this morning. With time ticking away I couldn't stay here all that long because I had to be home to take our little dog to the vet to have the stitches removed from it's knee. I fished on as quick as possible and managed to catch and release two more browns, the first one being a little 200 gram brown and the other a 330 gram fish. I did have a couple more hits and misses before I hopped out and headed back to the car. It may have been a blessing with the four wheel drive that had blocked the parking area at Western Creek and I finished up fishing here. I can't wait for the river level to drop to the 60 cm and lower level so I can get into the fast water runs again. 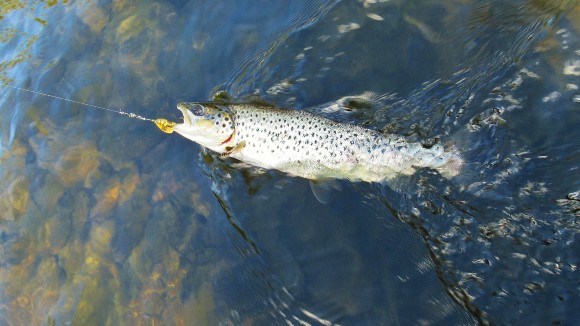 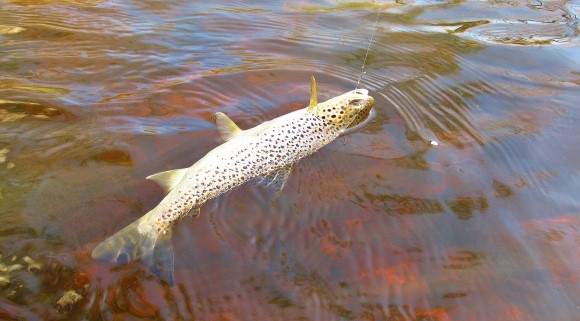 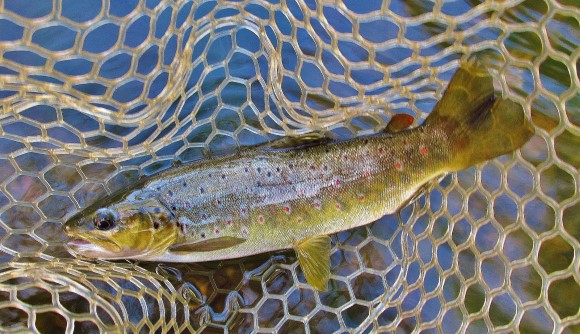 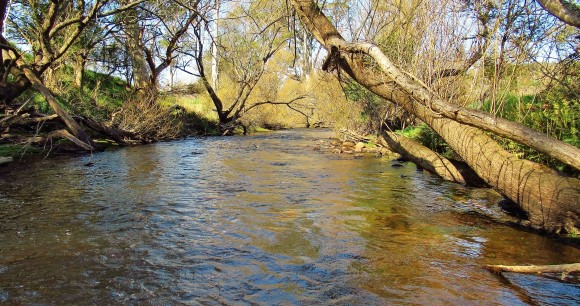 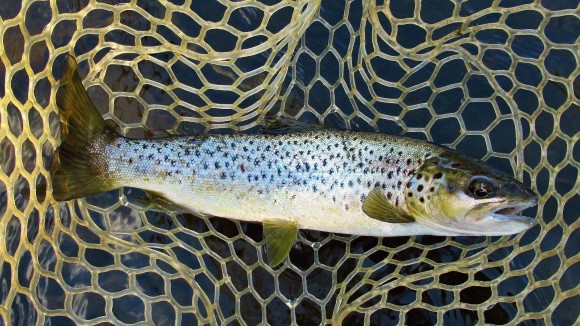 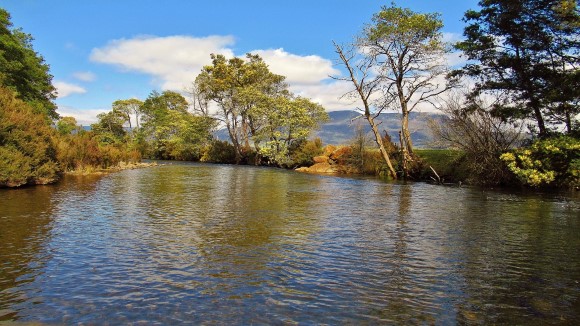 Perfect weather to be in the Meander River