My 350th trout, doing it the hard way

Sometimes things are never as easy as they sound, two days left in January to catch two trout to reach my 350th for the season, should be quite easy shouldn't, well it wasn't. Here's how I struggled to reach it. Never take things for granted.

As the title states, getting my 350th trout wasn't easy at all, with just two trout needed to reach it I certainly did it the hard way. Every time I get close to achieving something, for one reason or another it never comes easy for me. In a way I suppose that's a good thing, but just for once it would be nice to reach it without any hiccups along the way. Like today for instance when I headed over to one of my favourite small tannin streams where I thought it would be a simple matter catching two trout to reach the 350th trout before the end of January. Now I don't normally fish the small tannin waters at this time of the year unless we've had some decent rainfall which we did have a week ago. When I arrived at the stream I could see it was on the low side but to me it still looked good enough to hop in and catch a few trout. The tannin water was still on the dark coloured side of things which I felt would be in my favour so I started the session off with a small #00 copper Aglia Mouche Rouge inline spinner.

The first stretch of water I moved into was a long narrow shallow one, there I had a trout follow the spinner on the third cast and retrieve and that's as far as it went there. As I slowly fished my way up that long stretch of water I made several changes of Mepps small spinners such as a plain Aglia gold, gold Aglia Mouche Noire,March Brown Bug, and a Aglia Fluo brown micro-pigment lure. The trout were there in quite a few stretches of water but with it being so low the slightest noise was enough to see them dart off, even when the small light 1.5 gram spinner was enough to spook them when it hit the water after a long cast up the stream. In the end I went back to a well used old copper Mepps Aglia Mouche Rouge, it was that little lure that caught my one and only trout of the spin session. It had taken sixty five minutes to catch the first fish of the morning. After that I fished on for another hour and a half, so many chances went begging in that time after hooking and losing five trout. The sun was well overhead and on the water, I knew I was wasting my time here so I called it a day, what a fizzer it was too.

After yesterday's fizzer of a spin session today I headed over to the Meander River in what was a cool foggy morning to start with. Today is my last chance to catch one more trout to reach 350 before the end of January and that's why I headed to the Meander River where I was sure to do it with ease. Well, how wrong was I as it wasn't as easy as I thought it would be. The first area on the Meander River I headed to was to a nice stretch of water that had a mix of medium and fast water runs where I knew I would catch at least one trout with ease. When I arrived at the river it was running a little higher than I expected, still that wasn't a problem at all, it was still at a safe wading height anyway. Once in the river I was feeling quite confident it wouldn't be all that long before I had a trout in the net when I started flicking a #0 March Brown Bug spinner around, a spinner that always does well in this river. It wasn't all that long when I spotted a small brown trout come up behind the spinner as I slowly retrieved it, a couple of light twitches of the rod tip should be enough to get it to take the lure.

It didn't take the spinner, that little trout still sat behind the lure for a short distance before it moved off not to be seen again. A little further up the river the same thing happened again and again, still no takers and to make matters worse the rocky river bottom had quite a lot of green blade spinner fouling algae on it. I lasted forty minutes in the river here before I decided to head over to the fast waters where I was certain to catch a few trout. This time of year the fast waters are great for catching trout, cooler water with plenty of oxygen in it for the trout, it's a piece of cake for sure. When I finally arrived there I could see the river here was really on the high side and the going will be tough, it will be a case of going very slow and easy here. With the river being higher than when I normally fish here I knew it was going to be tough, there would be no crossing from one side of the river at all due to the force of the fast water, it wasn't safe enough to take any chances here today. After standing by the river I decided the best and safest side of the river to fish from was the left hand side, that's what I did.

Once in the river I could feel the force of the water against my legs, each step forward was slow and easy making sure I had good footing between the rocks before each step forward was taken. Thankfully there was a lot of foliage along it as well which gave me something to hang onto at times when the water was above the knees as I made my way upstream. I started off using the March Brown Bug here too, casting it into the very few flat waters that were available, normally there's trout in them, they weren't today. I was starting to wonder if I had made the right choice to head over here, should I have persevered where I was previously. I'm here now, so I'll just have to stick to it, sooner or later surely a trout will bob up and take a spinner. Still not having a trout come up behind the March Brown I changed over to a #0 Aglia Fluo Brown micro-pigment lure, another Mepps model that works well on the trout in this river. It wasn't all that long after changing lures when I had the spinner on the drift a small brown took it, one leap from the river and it was gone.

Another cast straight ahead of me into a small flat water I had a solid hit from a trout on the retrieve, it missed taking the treble hook. I just kept saying to myself, patience Adrian, just be patient, you will have one in the net sometime soon. Five minutes later as I was letting the Aglia brown drift with the fast flowing water a small brown trout took the lure, at last it was fish on. This little brown did its best to toss the spinner, it made quite a few leaps from the river, being a small fish it tired quite fast and I slipped it into the net. Trout number 350 for the 2021/22 trout season was caught, I can't say how relieved I was to see that little trout in the net. I was going to call it a day then and there but decided to fish a little longer, it was a good thing I did too as I caught a small/medium size rainbow trout. Catching that rainbow trout was quite a surprise too, the last time I caught one here was back in the 2019/21 trout season.

To me, seeing this rainbow was a sign that they're may have been some spawning size fish in the upper reaches of the river. I hope I'm right as it would be great to see a mix of browns and rainbows in the Meander River. Once I released the rainbow I fished on for another five or so minutes before getting out and heading back to the car. So as you see, catching the 350th trout of the season wasn't as simple as I thought it would be. It was certainly done the hard way that's for sure. 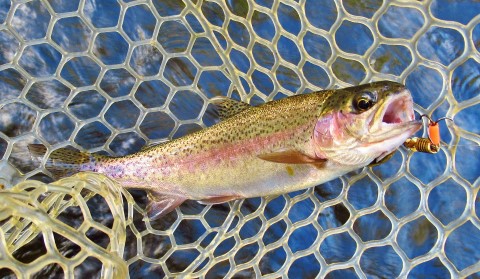 A surprise catch in the Meander River 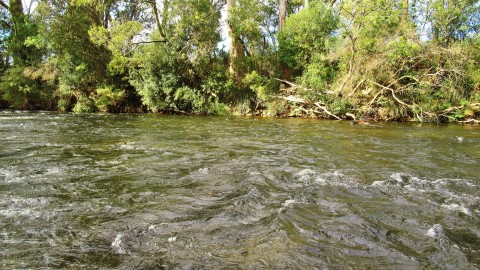 The 350th trout of the season was caught here

The 350th trout tossed the lure once it was landed 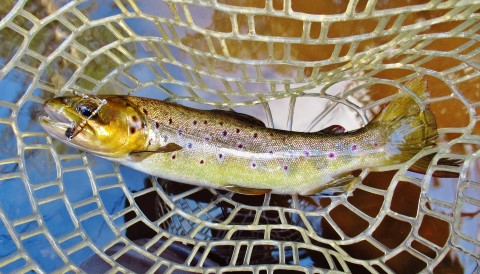 The one and only trout caught on day one 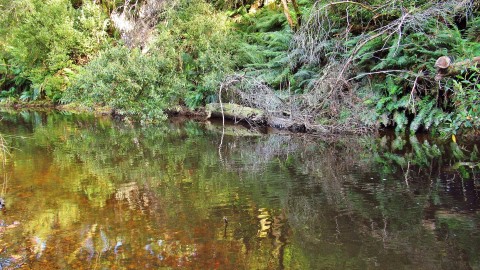 This water gave up the only trout on day one