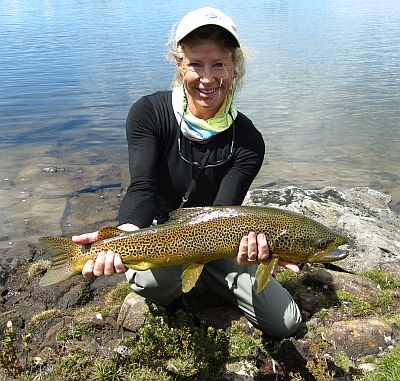 There’s a lot I could say about the attached photo! I could say it took us days of scrub bashing, boulder climbing, hard slog bushwalking to reach this remote shallow body of crystal clear water, located somewhere in Tasmania’s Western Lakes wilderness fishery. But really, it wasn’t too far to walk and the going wasn’t that tough. It was definitely worth the effort to get there and the rewards were so much sweeter.

The day I caught this beautiful brown trout was the first in a series of warm days up on the Plateau, right at the end of 2011. It was around midday and we were beginning to bake beneath the high altitude sun surrounded by alpine shrub and sparse shade. We’d searched a number of nearby waters in the morning, scanning the shallow lake edges for torpedo shapes and spotting the occasional rise in deeper waters. My much more experienced fly fishing buddy had already polaroided and caught several good sized trout on the dry, so I was determined to keep moving ahead of him and be first to scout some virgin water.

Then as I rounded a small bay, I spied a likely shape from behind a spikey bush – a lovely hunk of fish within easy casting distance. The fish seemed oblivious to me as I snuck close to the water’s edge, hand covering my shiny fly reel as I found a suitable perch from which to cast.

“Cast to him, quick!” cried my buddy, who was approaching rapidly from behind, having seen what I was fixed on. I knew my mate was fully prepared to take the shot if I didn’t get my line out first, so I cast as fast as my novice fly fishing fingers could manage.

Two false casts and my bright fluorescent fly line fell neatly on the water in line with the unmistakeable outline of the fish. But to my dismay, the leader folded back on itself and the spinner pattern dry fly landed in a gentle flop on the wrong side of the fly line.

I held my breath. Time slowed and I watched in stunned silence as the fishy shape swam beneath the bright fly line – completely undeterred – and gulped the fly. I was mesmerised, the movement of the fish and the whole thing seemed surreal.

“He’s taken it! Strike!” cried my friend, so I did. I felt the delightful jerk of the fish and its satisfying weight on the line. I kept the tension on and calmly played the fish amidst the excited calls from my fishing coach. It wasn’t long before I’d landed this very nice fish, one of Tasmania’s pure wild brown trout. I held my trophy briefly and thankfully for this photo before letting him swim away to carry on with life.

I could say that I’m an intrepid hunter of fish, a fly fisher; that I polaroided this trout, cast to him and caught him, and that I knew exactly what I was doing. But the truth is that I’m just lucky, a beginner in the right place at the right time with a good friend to show me the joys of fly fishing in this magnificent corner of the world.

There’s a whole lot to be grateful for living in Tasmania!