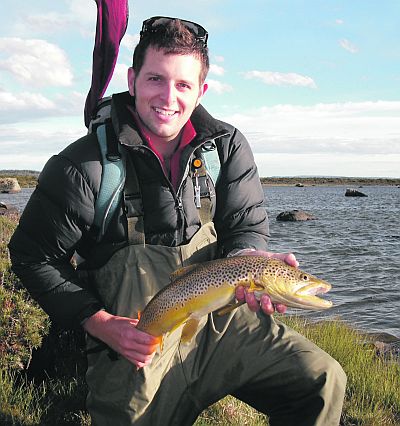 By Todd Lambert
One of my New Year resolutions for 2010 was to get out of my comfort zone, drive past the ever reliable Arthurs and Great Lake and to start exploring the Western Lakes, so when a work mate (Huon Witt) suggested we pay a visit to Talinah Lagoon on a rostered day off, I was very quick to say yes.

I have been around long enough to know that having someone with previous experience at waters like these is a distinct advantage over going in unprepared and uninformed on one’s own. After all, there have been many stories told of people who have ‘seemingly’ done just that in this area and have sadly paid the price for it in years past.
So with that, the date, pickup time and trip details were planned. My expectations were not unrealistic, being content to watch, learn, listen and take in the scenery that seemingly changed by the minute.
As that old saying goes, to catch a fish would be a bonus and a big one at that… on this visit at least.
Allan Davey, proprietor of Doo Gun tackle in Longford and a ‘not to shabby fly fisher’ himself, was also up for trip which made our chances of getting a close up look at what Talinah had to offer that much better. So with bags packed we headed off at 3.30 am.

Getting there
Leaving from Longford we snaked our way up Poatina hill and turned off at the entrance to Lake Augusta which is situated virtually opposite the ranger station at Liawenee; this road is recognised as the gateway to the Western Lakes and the many small lagoons that make up the Nineteen lagoons chain.
Follow the road around to Lake Ada, park your car in the car park opposite the Ada boat ramp, follow the old four wheel drive track  in front of your eyes and start walking, Talinah Lagoon is a relatively easy 40 to 45 minute walk from there.
One thing I must stress though is please remember, once you leave the car park, you are on your own; make sure you are prepared with ample food and drink, an EPIRB, GPS, compass, maps and gaiters in case of snake bite (and you will see plenty of those).
Comfortable hiking boots, wet weather gear, and lightweight breathable waders are also a necessity. 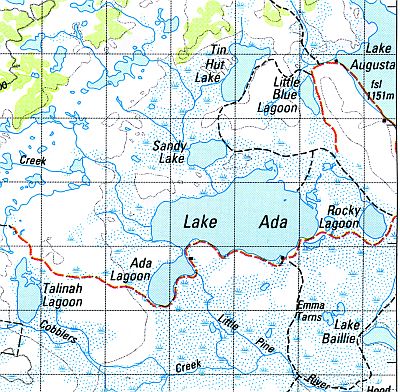 Talinah
Upon arrival, we set up our rods and with the wind blowing in at around 10 to 20 knots from the West and virtually straight down it’s middle we thought our best plan of attack would be to strip wet flies for a while - at least until the sun rose a little higher. Hopefully later on the cloud cover would lift enough to make it suitable for polarioding with dries.
With that in mind we split up with only a couple of hundred metres between us and started walking and looking for the tell tale signs of a moving fish.
Talinah, like many lakes in this area, is very exposed and you have to stand well back from its banks in order to spot a fish before it sees you. This approach was made all the more difficult with the poor visibility we were experiencing on this day, so a change of approach was needed.
As Talinah has overhanging banks that the fish love to lay alongside, we started moving very slowly along them casting our flies hard up against its banks.
Once this method was adopted, it wasn’t long (probably only 15 minutes after we arrived in fact) when Allan let out a shout that he was on. After a lengthy tussle, a fine trout of around 4 pounds was in the net.
Huon was, by this time, wading in the middle casting towards some exposed rocks.  Having fished this water many times, he had a lot more confidence than myself when it came to wading Talinah’s depths. This lagoon has what he refers to as a false bottom; by that I mean, if you put your foot in it, you will sink in the mud up to the top of your boots, then you will find, beyond that, it has a hard base upon which you can easily walk.
Although witnessing all this firsthand, I still wasn’t game to proceed into its depths too far, on this trip at least. Mind you, I found myself in enough trouble sinking up to my knees on a couple of occasions on ‘dry land’ with what I thought was solid ‘dry ground’ underneath me.
So another tip, if it looks like mud, it most probably is and don’t be fooled by seeing a couple of wallaby tracks on it,  remember these little fellas only weigh a few kilos at most and it’s not really the same as a bumbling first time angler to this area and weighing in at a modest 105 kgs. In fact the number of times I fell over, only to get back up quickly so that the other’s didn’t see me would have hit double figures, lucky for me they were too engrossed looking for fish to notice the idiot on the bank behind them and if they did…..they were too polite to say anything or laugh.
On one of the few occasions that I was upright, Allan gave me a wolf whistle, ‘come over here mate and have a look at this’.. he said.
Tucked up hard into the bank was a fish that we both guessed would go an easy six pounds, Allan tried to get me to cast upwind to it, but being a left hander into a strong wind, this was never going to be achievable, after all, although I am a modest cast with a fly rod, …I am no Peter Hayes.
So with that, I tried to dangle the fly over the fish’s head. I couldn’t see the fish so I had to guess where it was and dropped the fly over the bank.
The line moved as the fish sucked it in and just as quickly spat it back out, I didn’t realise what had happened until it was too late—I thought it was the strong wind. So we had to be content in seeing the big black shadow slowly swim off and hoped he would be there on another visit when perhaps he can be attacked from a better angle.
Little episodes like this presented themselves to us all day, and we could only imagine what it would have been like if we did have that perfect polarioding day afforded to us.
We finished with four, took some great photos (as you can see) and yes, I even managed my first Talinah Lagoon fish, beyond that and probably much more importantly,  I learnt so much from Allan and Huon, so this trip has only served to whet my appetite to do so much more fishing in this region.
So if you are in the same situation as myself, and want to do it, I suggest you take the bull by the horns, find some mates that have fished the Western Lakes and are willing to take you with them….. don’t let them out of your sight.

As a footnote, both Huon and another gentlemen fishing the Lake alongside us saw what they called a double figure fish swim past them so yes, there are trophy fish in it.

Talinah Lagoon, a water that is so often walked passed by hikers on their way to the Christys system, it’s a sleeper and definitely worth a look….. not just a second glance. 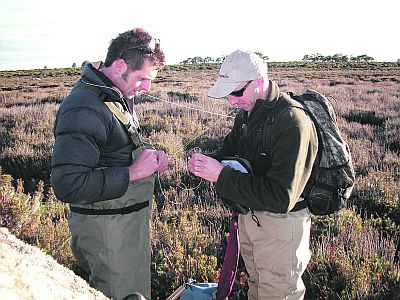 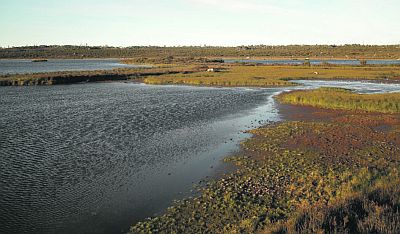 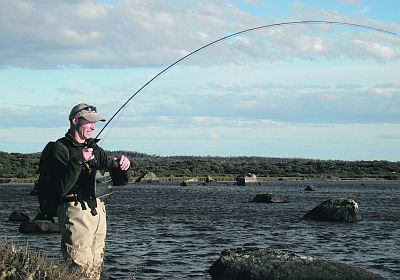 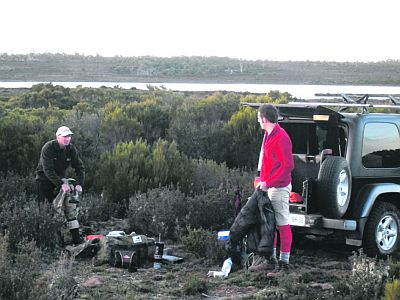 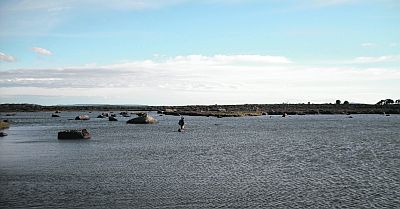