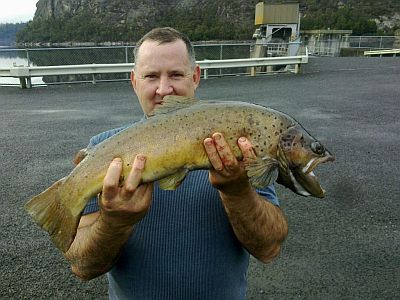 There are an ever increasing number of sea runners and resident fish being caught in estuaries along the coast. Bait numbers are building up and there are fish feeding on the bait. You can try any water flowing into the sea from small creeks to large rivers. If you look closely enough for long enough you will generally be able to see signs of Trout.

I had a report from a party of anglers who headed into the Western Lakes last weekend. The fishing was reasonably slow but they did manage to catch some fish. It’s probably a little early for this area as the trout take a bit longer to get active due to the colder water temperature, but it won’t be long until frogs become more active and the fish turn their attention onto them. Anyone who has seen large Trout charging around after frogs knows that this makes for exciting fishing.
It seems that Lake Barrington and Brushy Lagoon have been providing a lot of sport for all methods of fishing. There have been some big fish caught and everyone is having a lot of fun catching the large Rainbow’s that were released recently. While the majority of anglers have been doing the right thing we have heard reports of a few greedy ones taking well above the allowable catch limit. Hopefully they will be caught and fined.
Four Springs Lake has been fishing well and the fish being caught are in excellent condition. Early morning and early evening seem to be the best times but there have been some good fish caught during the day. Soft Plastics have been one of the preferred options with the ever popular Black and Gold T Tail being the standout. Rapala Perch Jointed J5 worked well for two coastal Anglers.
There are a few Australian Salmon at Port Sorell that have been a lot of fun for anglers chasing them. The Inlets at Stanley have also been good.
Calamari Squid are being caught in increasing numbers along the coast. Try some of the Shimano Keimura Squid jigs. They work well especially if you use them in conjunction with fluorocarbon leader. For the best success rate use as light a line as possible (4 to 6lbs).
Young Anglers Development Inc. are having another young angler’s day at Frombergs Dam on Sunday 25th September from 10am to 3pm. The cost to attend these days is $15 for the whole season so it’s very affordable and a great fun day out for the kids. If you need any further information call Lyle on 64254809.

Gadget of the week. 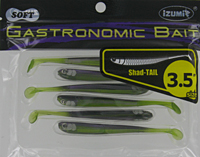 Izumi Gastronomic Baits. When I saw these new soft plastics at the Tackle Show this year I had a hunch they would be dynamite on sea runners. The hunch is now proved, they work very well. Check them out at Tassie Tackle and Outdoor.

Winner of photo competition for August is Graeme Purton.