There has been a lot of discussion among our customers in recent weeks with regard to the Super Trawler M V Margiris fishing in commonwealth waters targeting Red Bait and Jack Mackeral. This is fishing on an industrialised scale and to put the size of the vessel into perspective it is 142m long compared to the Spirit of Tasmania at 194m long. This factory trawler is huge and it stands accused of leaving collapsed fisheries and unemployed fishermen in its wake.
We are told that there is science behind the decision to double the catch of Jack Mackerel to 10,000 tonnes (10,000,000 kilograms). Is it just a coincidence that this happened just as the super trawler applied to come and fish in commonwealth waters. We are also told that the research data is 10 years or more old.
Most people understand that there is an ecosystem in the sea and potently breaking any link in the food chain can have a devastating affect on all species.
The only reason that the super trawler is being considered is that we have a well managed fishery that still has fish in it. Do we want to put this in jeapordy? This Factory Trawler will be extremely efficient at catching fish and unlike smaller boats can stay at sea till its freezers are full. The large majority of these fish will end up in West Africa for human consumption as frozen whole fish which is ironic because last March, in the Atlantic off Mauritania, the Margiris was the centre of a protest campaigning against European operators who are taking West Africa's fish, leaving locals catchless.
Yes there are a lot of people fired up over this issue and I believe rightly so. If you want to make your voice heard front up to your local members or senators’ office and ask to be seen so you can voice your opinion.
Sinking Rock and Netley bay at Marrawah are still producing some very good catches of Australian Salmon. The size of the fish is still good and they have been caught with spinning and bait.
We had word that the IFS have transferred some adult Brown Trout into the Leven and Mersey rivers and this will give local anglers the chance of catching a few bigger fish in the coming season.
Freshwater anglers should check out the new lake levels site; http://www.hydro.com.au/water/lake-levels. You can now see not only the levels but also the trend of whether they are falling or rising.
Tight lines till next week

Gadget of the week. 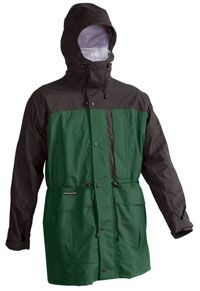 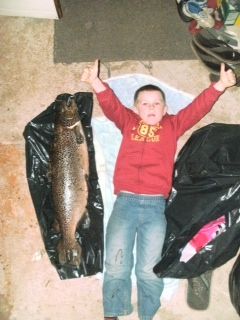 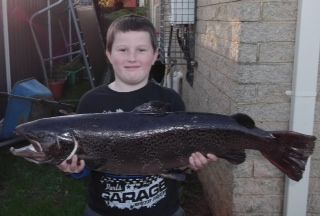 Tristan Blake with a 10lb Fish from Lake Barrington.