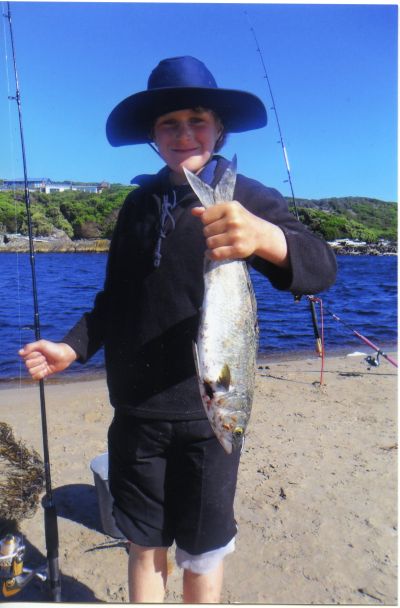 The wind has been blowing from the East for a while now and while conditions have been less than ideal on the East Coast, West Coast conditions have been fantastic. Stripy Trumpeter are one of the species being targeted and there have been quite a few caught. School Shark, Gummy Shark and Blue Eye Trevalla have also been in the mix.

We had a report this week of a Stripy Trumpeter that was caught on a Dog Tooth Ika Knife Jig. This method of fishing that has increased in popularity on the mainland but has been rarely used down here in Tassie. Expect to hear more as Tassie anglers embrace knife jigging, slow jigging and micro jigging. Anglers on the mainland have been finding it is a very effective and fun way to catch fish.

Last year there were a number of Broadbill Swordfish caught off Eaglehawk Neck and St. Helens and it is set to continue this year. There was a good fish hooked and lost at Eaglehawk Neck this week and a couple were landed recently. With anglers targeting these fish there will be more caught and it seems that the pool of knowledge on how to go about catching them is increasing and being shared.

We have had reports that there are plenty of Arrow Squid around at the moment. They are being caught of the West Coast and all along the North Coast. There have been some good catches from the bluff area at Devonport. They are aggressive and not very fussy and will attack most squid jigs.

There are still plenty of Australian Salmon, Mackeral and Couta in the bay at Burnie. The best way to target them is from a boat, however if you are fishing from the shore try some burley off the boat ramp or have a spin at the mouth of the Emu river.

There are a few trout being caught in the evening, in impoundments such as farm dam’s , the Guide Dam and Pet Reservoir. The main method has been live Mudeye’s and Mudeye flies. Try using some light spinning gear with small surface poppers.

The Ulverstone Junior anglers are holding a Junior Angling Fishing day at Frombergs Dam, Ulverstone, this Sunday from 10am till 3pm. All are welcome and all the kids will have a ball.

Photo;Jason Harrison age 10 with a nice Australian Salmon that he caught at the Arthur River