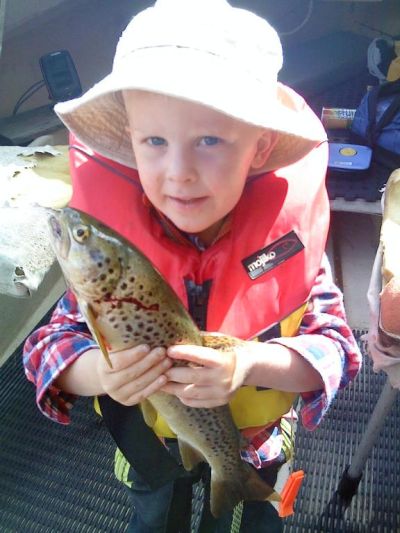 It was interesting to see that there was another huge Broadbill Swordfish, weighing 263kg, caught off the East Coast earlier this week. It’s certainly got a lot of Tasmanian Game anglers interested as well as a lot of interest from Mainland game anglers.

Gamefish have been scarce in the St. Helens area. Eaglehawk Neck however, has been good with plenty of large Albacore Tuna being caught well over the 20kg mark and a few bluefin up around 30kgs. There have also been some bigger Bluefin Tuna being caught in the far south around Pedra Branca, Mewstone and Maatsuyker Island. One Hobart angler landed a jumbo 112kg bluefin last weekend.

Snapper are still a prevalent species along the coast. One of my staff and some friends took advantage of last Saturdays calm weather and headed far North West in search of some ‘red fellas’. They were pleasantly rewarded with 6 snapper up to 4.5kg, with accompanying boats also taking their fair share.

Snapper of all sizes are not shy to take a big bait. On a simple 2 hook paternoster rig, large chunks of squid or a fresh whole fillet of freshly caught bait will suffice and reward you. Flasher rigs were a big hit on the weekend also- with a small strip of squid to enhance the luminescent materials on the rigs. In the shallower waters micro-jigs and soft plastics were a hit along with some pleasant ‘by-catch’ of shark, salmon and flathead.

Rumours of kingfish in the Port Sorell area under schools of salmon are still floating about. We have no photographic evidence yet, so if you or someone you know has landed a kingfish in these areas please let us know.

The flathead have been coming in thick and fast and most anglers reported good bags of 35cm+ fish from all parts of the coast. Blinking Billy at Round Hill has been a hot to trot spot for the sandies, and gummy have been noted in this area also.

The west coast lakes are producing some good, solid trout all taken on black and gold lures or plastics to replicate Galaxias that Brown Trout now are chasing. There were some good Brown Trout taken by anglers fishing the Pirtek Challenge on Sunday, and it will be interesting to see if a local North West Coast angler wins it yet again.

The Ulverstone anglers club are holding a Junior Anglers fishing day at Frombergs dam, at Ulverstone, this Sunday from 10am till 3pm.