Solar panels on the roof of the IFS Hatchery 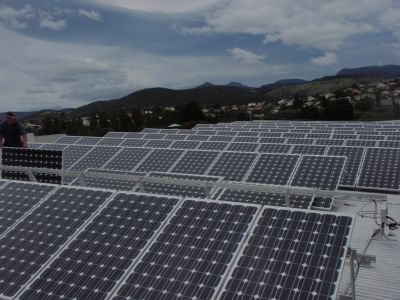 Inland Fisheries Service is seeking sustainability across every aspect of its business. Not only does the Service have a mission to manage the State’s inland fishery in a sustainable manner but it has a responsibility to reduce its carbon footprint as part of the Government’s commitment to environmental sustainability.

However, it is the financial sustainability of the Service that underpins its future operation. So despite the fact that the environmental benefits were an important consideration in the latest ‘green investment’ by the Service, the economic benefits were a key motivation.

Tony Wright, IFS Deputy Director, explained the reasons behind the recent investment by the Service in a solar power system for its Hatchery and Head Office at New Norfolk. He said that the Service currently spends approximately $70,000 per year on electricity and the single biggest energy consumption is in the hatchery for cooling and recirculating water.

“This is because the water temperature in the tanks must be kept at an optimum level in order to maximise trout production – increasing growth rates and reducing mortality rates,” Tony said.

“Our investment in solar power, which cost approximately $80,000 for the equipment and installation, will help offset the costs of cooling the hatchery.

“Solar power generation will now cover approximately 10% of the total power usage at the site, giving a saving of approximately $7,000 per year.

“Looked at in terms of the savings in power used, our investment in solar promises an excellent return in the order of 8.7%, which is well ahead of the next highest rate of return available to the Service of 6.2% for term deposits,” he said.

The system includes 140 180W solar panels, which cover about half the roof area on the hatchery building and four 7 KW inverters, totalling 28 KW of power. Tony went on to explain how the investment stacks up for a number of reasons.

“Firstly, the maximum amount of energy usage in the hatchery is in summer, when the water must be cooled on hot days,” he said.

“The maximum production of solar energy meanwhile, is also during the summer months, so there’s a complimentary association between our times of maximum energy supply and demand.

“The solar panels also reduce the heating costs directly by intercepting the sun’s rays on the hatchery roof, providing an additional insulation benefit.

“An added bonus was the property positioning and the building’s orientation in relation to the sun’s position and movement across the sky.

“Although it wasn’t planned at the time of construction, the building provides the optimum degree of angle to maximise photocell penetration, and so it just happens that our property is perfectly suited for solar power generation.

“A distinct advantage of solar is that the system has a long life span - the panels are guaranteed for 25 years but have a life expectancy of 40 years.

“The price of energy meanwhile, is likely to increase in the future, hence the expected returns, which are based on current energy costs, are likely to be conservative.

“Furthermore, the demand for energy consumption by the Service is likely to increase in future, particularly considering the impacts of climate change both on the fishery and hatchery production.

“Hence, the returns over the lifetime of the system should improve each year.

“A final positive is that there’s room to expand in future,” said Tony.

“The Service can add to the system at any time by installing an array of panels and purchasing additional inverters.

“In fact, our intention over the next 18 months is to purchase additional inverters, providing for approximately 20 KW more power, and install another 127 solar panels on the roof of the hatchery,” Tony Wright said