by Mike Stevens
I entered the Pirtek Challenge 10 April. It has been running for three years now in support of Prostate Cancer Research. The email to see what species were up for the year is usually posted at 6pm the night before, but this year it was 7pm before we could see what they were.

A computer meltdown had organisers and competitors stressed. Flathead and Australian salmon were nominated and I decided Australian salmon were the best option to try and catch a decent fish. Georges Bay always has a few larger slamon lurking about, so Julianne and I set off about 7am. Fished the hot spots for nothing and then it was off down the channel to try and find one of the lurking larger specimens.
Got one 50cm version way down at Dora Point and then hooked a "horse" back up the channel a bit on a black and gold Yep Flapper. After the first screaming run I thought it might be a kingfish, and to be honest it was the first time I didn't want to catch a kingie. I backed off the drag, gave Julianne some boat driving instructions and gave chase.
Once boated, measured, photographed and released I called it a day. At 56.3cm I knew it was unlikely I would get a bigger salmon in Georges Bay. Turns out it was good enough.
Well done to all other competitors - and well done to supporting
Pirtek and prostate cancer research. 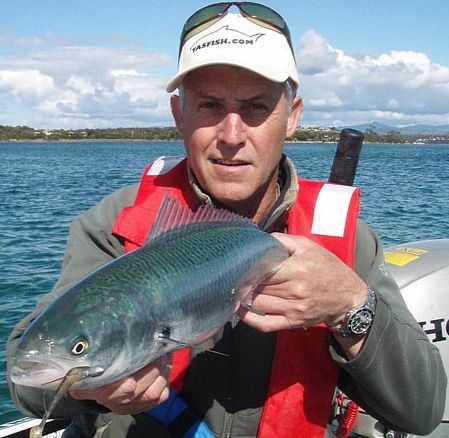