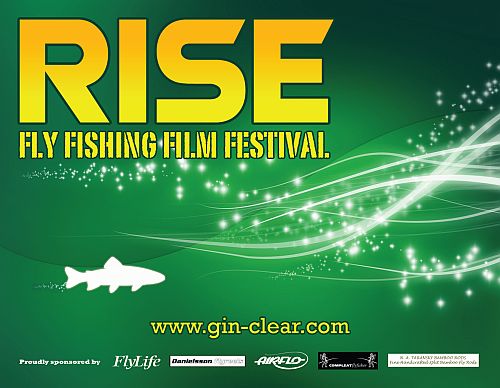 Recharge this winter as RISE - Fly Fishing Film Festival 2010, the world's largest fishing film festival, hits theatres on the Australian leg of its 2010 worldwide tour. Throughout July and August, cinema audiences will be electrified by a selection of fly fishing films presented in crystal-clear high definition on the big screen. Exotic destinations, epic adventure, big fish and award-winning cinematography explode from the screen as this live event spectacular wheels its way across the country. Check out www.gin-clear.com for all tour information, videos, photos and more.


Crisscrossing the globe, RISE - Fly Fishing Film Festival 2010 showcases a variety of stunning movies from Broome, New Zealand, Mexico, California and Iceland. Gin-Clear Media's The Source – New Zealand is the feature movie of the festival. Part of a series, The Source exposes the best fly fishing destinations from around the world. Nick Reygaert, The Source – New Zealand's director, says, "New Zealand offers a seemly limitless amount of variety for fly fishers yet each person enjoys and values the fishery in their own unique way. With The Source – New Zealand we set out to capture those special moments that define a fishing trip and through these get a glimpse of what the Kiwi experience means to each of the featured anglers. For some, it means casting size 18 emergers to delirious brown trout during a blanket hatch, for others it's the triumph of catching a 10lb + fish on a dry fly, for others it's a jet boat ride into a remote fiord!"

RISE- Fly Fishing Film Festival 2010 also creates cinematic history as the only high-definition fishing film tour in the world. The true cinematic widescreen format will bring fans even deeper into the wilderness, bringing each adventure to life on the big screen. For many, RISE- Fly Fishing Film Festival has become so much more than just going to the cinema. Now in their 5th year, these annual fish-fests have become a true celebration of fly fishing and mark the end of the fly fishing season. It's an excuse to get together with friends and reminisce about the past season as well as look forward to the season to come.

We have the dates and venues for the Tassie shows, could possibly add a NW show but we are still finalising that. As follows

Tickets available on-line at www.gin-clear.com or at the door but considering
last years sell out it is highly recommend buying before the night.

Corporate Information
Gin-Clear Media is a New Zealand based multi-media company whose enterprises include leading websites, feature films, events and exhibitions. Flylife Magazine is the official partner of Gin-Clear Media in presenting this epic film event to audiences throughout Australia and New Zealand.