I though a trip back to the Leven River may be worthwhile now the river level has dropped backed to a safe wading height after some heavy rainfall a couple of weeks ago. My last trip there was a good one with nineteen trout being caught & released, today the water level is lower than that trip was. When I arrived it was very foggy and the conditions were great, cool and not a breath of wind, just perfect for chasing trout. There were a few campers set up on the property where I started off the spin session, good thing was I had arrived at 6:00 am and they were still in their beds.

It wasn't long before I was in the river working my way up to the fast water runs flicking the #1 Aglia Furia around. It was quite eerie in the river this morning with it being so still with just the sound of running water and frequent bird calls. The silhouette of trees along each side of the river as well as the dead and fallen ones in the water made for a few great photos. The trout weren't around for the first five minutes or so until I finally had a follow from a medium size brown, a fish that was only half interested before it slowly turned and moved off. Not that long after I had a small brown take the Furia spinner, I had my first fish of the session.

A little further up I picked up another small brown, one that came from a small flat water near the river bank. It wasn't until I had reached a shallow fast water ten minutes later when I picked up my third brown, this one was a nice 320 gram fish. The fog was slowly being burnt off as the sun rose higher then started to hit the water, with a forecast of 24 degrees later one could feel the air warming up already. As I approached a very long wide medium flowing stretch of river I decided to try a small section of back water that ran off it. I used a small hard body lure there and picked up a solid 410 gram brown that smashed the lure no sooner it had hit the water. After releasing the brown I moved into the long wide stretch of river, all I could manage there was one hit and miss plus several follows from some medium brown trout. I used a variety of Mepps spinners & hard body lures without a single taker.

The following two hundred meters of river was a mix of fast to medium runs, it was there I caught and released another two solid browns from three hook ups, the lure used was a 44mm GagaGoon MI Perch. With six trout caught and released and more wide long slow flowing water ahead of me I decided to head back to the car and try another stretch of river further downstream. After a twenty minute walk I was back at the car and on to the next area to fish. I stayed with the GagaGoon lure and caught two small browns from four hits, all in the one small fast water run.

The next medium flowing stretch of river I had quite a few hit & misses before it gave up a nice 310 gram brown, that fish was my 300th trout for the season. I didn't think I would reach the three hundred trout before the new year seeing the the season has been so up and down for me. The sun was now high and fully on the river, the fishing slowed down to what it had been. I was still having plenty of follows but the aggression from the trout had dropped off. I fished on for another hour and a half and caught & released another six browns which made it fifteen for the spin session. I called it a day and arrived back to the car at 12:20 PM. It had been a long day in the river and I was hot, tired & very sore in the hips & lower back. 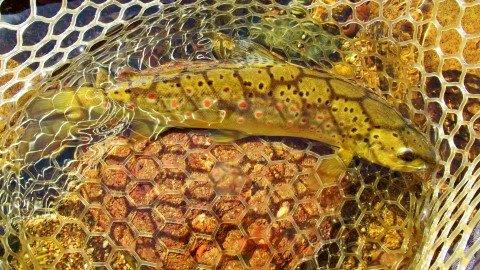 Beautiful golden colours in this trout. 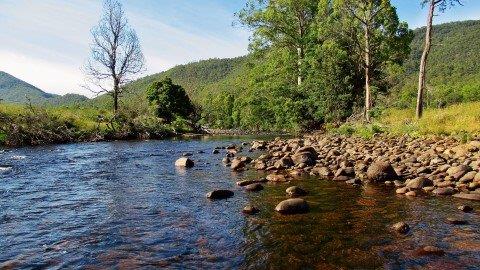 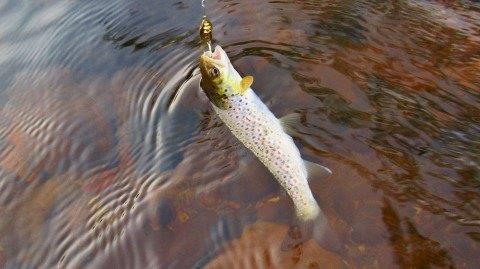 Second trout of the session 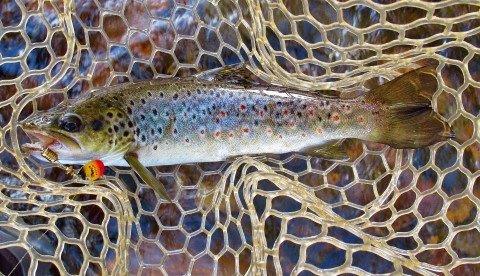 This brown was taken in five inches of fast water 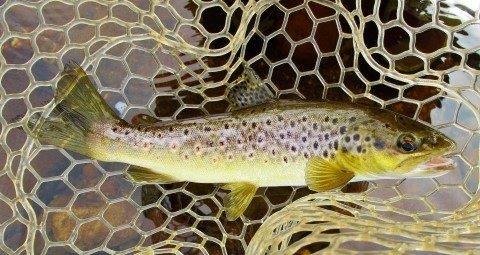 Trout No 300 for the season