After having quite few injections in the lower back and hips this morning I was feeling quite good so decided to head back to the Leven River for another shot a picking up a few more wild brown trout in the afternoon. I had arranged to meet a friend at Gunns Plains who's just made the move from Queensland to Tasmania to start a new life here. It's been 35 years since he last had a fish for trout so today was a big day for him & one he'll remember for some time too as you'll find out when you get a little further into this report.

The Leven was running low but still at a nice wading height and it was a very dark tannin colour where we entered in a medium depth stretch of the river. The sun was out but the 25 to 35 kph winds kept the heat away, the wind on the other hand was going to make casting the Mepps spinners pretty difficult. Kim was wearing a brand new pair of neoprene waders that were fitted with hard soled rubber boots, something I wouldn't recommend any one to wear in a river here in Tassie as they're not suited to river fishing at all. Our rivers here are just too rocky and can be very slippery and the neoprene waders with those boots only spell one thing.. “Trouble”.

I got Kim to have around ten minutes or so of practice casting to get used to flicking the Mepps black fury around because it's been such a long time since he's done it. Once he felt comfortable with his casting we headed on up the river flicking the spinners around in a wide slow flowing deep stretch of river. With not having any touches in the dark tannin water I suggested we head straight onto the shallow fast water runs a little further upstream. I decided to take the Aglia Furia off and go with a small #00 gold Aglia spinner in the shallow water. Kim was finding it hard making his way up the river with those hard soled waders, he just couldn't get any grip on the slippery rocky river bottom. Finally after several minutes and a cast into a small flat water close to the right hand river bank I was onto a solid brown.

It wasn't long before I had it in the net and Kim was stoked to see the beautiful wild brown trout after so long away from trout fishing. Then it happened, Kim's lure became snagged on a rock, as he made his way to retrieve it he lost his footing and took a dive into the river. He was fully soaked too as it wasn't the shallowest piece of river to take a tumble in either. After a few minutes he decided he would call it a day mainly because he had also twisted his hip a little bit and seeing as he had a hip replacement some four months ago it was a wise move not to fish on. I was calling it a day too but he told me to continue on as he would be fine to make his way back to his car. I continued on after making sure he got out of the river and onto flat land. Once back in the river I kept working the flat waters along the river bank where I picked up a lovely well conditioned 530 gram brown.

When fishing the fast waters I always love casting the lure into the flat water close to the river banks, they're great holding areas for trout. Another good holding area for trout is the flat water behind large boulders & rocks in the river because they are very good trout zones. The following sixty meters of fast water gave up three more small wild browns before I thought it was time to move to another stretch of river a few kilometres downstream. The wind hadn't eased off all the time I had been in the river and several times it was impossible to cast the 1.5 gram spinner. All I could do was stand in the river and wait for a short lull in the wind & have a quick cast before it blew again. By the time I walked back to the car and moved to the next stretch of river to fish the wind was really howling straight down the river. I fished four hundred meters of fast water runs for just one small brown & that was the only hit I had. My day was done with a total of six trout being caught over three hours in the river, not one of the best days spent in a river. 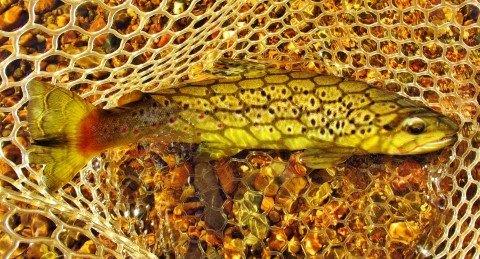 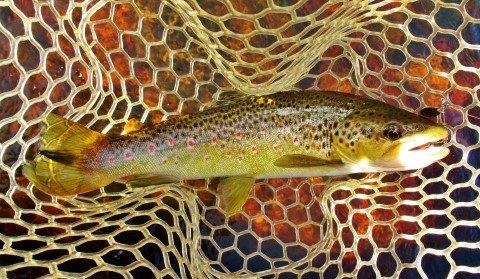 First of the day Leven River 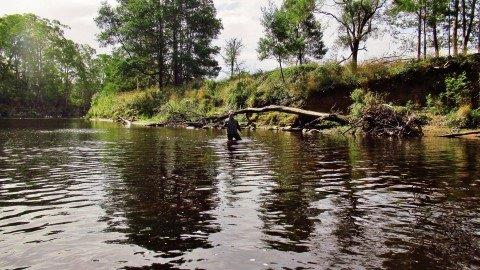 Kim taking it step by step in the Leven River 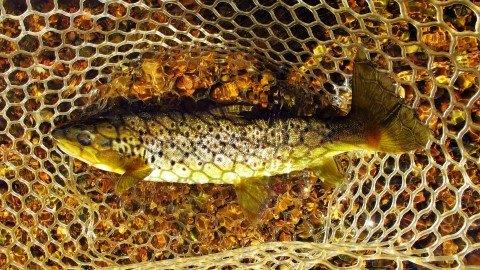 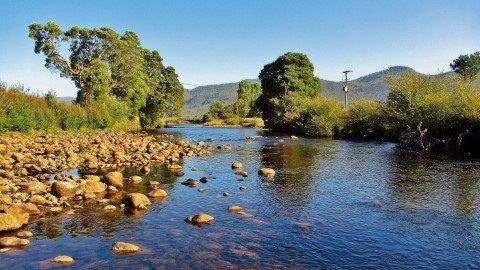