With the river level being low I felt it was time to check it out and see if I could catch a few wild brown trout in the Gunns Plains area. The weather was going to be pretty good with patches of cloud and a temperature in the low twenties, the only problem was going to be the Easterly wind that was due sometime during the day. Today was one of my earliest starts of the season, I was in the river by 6:35 am, it was a beautiful cool peaceful morning to be in the river too. The first thing I noticed in a long, wide, deep stretch of river were trout surface feeding in quite a few areas but mainly on the shallower left hand side of the river.

That's the side of the river I had to make my way upstream to reach the faster flowing waters where the majority of my fishing will be done. I did flick the Mepps March Brown & a couple of small unbranded hard body lures around as I made my way to the fast waters without any hookups. Several times a bow wave appeared behind the lures but that's as far as it went. It wasn't until I moved into the faster flowing shallow waters when I had a hit and miss from a small brown trout on the #00 Aglia Mouche Noire. My biggest problem was the cotton-like green algae that was on the rocky river bottom, the spinner only had a get near a rock and it became fouled with algae.

The deeper fast water runs weren't quite so bad as I could keep the little light weight lure above the rocks, it was the shallower runs that was the problem so I had to bypass some stretches of water. A little further up the river was a small side water on the left hand side of the river that still had a reasonable flow in it, even though it was very shallow it was still worth having a few casts and retrieves in it. On the first cast and retrieve a small brown had a go at the spinner but missed taking the treble hook, my second cast was a little further up the stream, on the retrieve the spinner was taken by another small brown trout.

That little trout stayed on, finally after one hour and twenty five minutes in the river I landed the first trout of the spin session. I am sure this was the longest time I have spent in this river before catching the first trout of the day, even though it was only a small plump fish I was very relieved to have a score on the board. After its release I headed back into the mainstream where I continued to cast and drift the little gold Aglia Mouche Noire, two casts on the drift was all it took before I had my second trout in hand. Not long after that I hooked and lost another small trout, after that I moved through a small gap in the shrubs and re-entered the small shallow side water.

Even though the side water was very shallow in most areas it did have some nice flat waters that were deep enough to be holding a few trout. I hooked and lost two trout in a row in the first two small flat waters, the next one I moved into did give up a trout and that one stayed on. Then I lost another couple which included a solid trout that would have been in the 350 gram range and that didn't go down well at all. As I continued to fish my way up this small stretch of water I had several other strikes, all of which didn't take the spinner. As I approached the top end of this side water I decided to change over to a plain #00 gold Aglia and the last small piece of water gave up another small trout. From here I had to make my way back down stream to where I could get back into the mainstream and continue fishing the fast waters. Once back in the fast water I did catch and release a couple more small browns in quick time as well as hooking and losing a few more little browns.

Finally I had reached the top end of the fast waters where I caught a couple more small trout, it was there I thought about heading back to the car and trying another fast water a few kilometres downstream. Ahead of me was a long wide stretch of slow flowing water and looking at it I noticed there were a few trout on the surface feeding not all that fat ahead of me. I decided I would have a few more casts and retrieves here before heading back to the car, it was a good decision to do so, I went on to catch and released another four trout here taking my catch into double figures which I was quite happy with.

The last two trout were caught on a #0 March Brown Bug spinner after I had a quick change of lure due to the water being a little deeper .As I was crossing the river to make my way back to the car I changed my mind and took a punt to continue fishing my way upstream. It didn't take all that long before I picked up a small brown, to me I felt the plan to keep fishing my way up the river was a good one. I knew if this wide slow flowing water didn't give up many trout then the fast waters ahead of it probably would, another reason to push on. The sun was well overhead now and it was stinking hot. Not only that I was having a battle with March Flies, at times there were half a dozen of them giving me pure hell. They did not give me a minute's rest as they kept on buzzing me non-stop and I was getting sick and tired of trying to knock a few of them off with my hat.

To cut a long story short, the wide stretch of water didn't give up another fish and the two hundred meters of fast water above it, well that was a disaster. Yes, the trout were there and most were aggressive but I didn't land a single fish from the half a dozen hookups I had. I was hot, tired, and sick to death of those damn March flies annoying the hell out of me, I looked at the time, it was 12:05 pm, that's when I called it a day. All up I had caught eleven trout from twenty three hookups, not a good day really, then again I suppose it could have been worse. The walk back to the car was a long twenty minute one, as usual the first thing was to grab a cold Pepsi Max from the esky that was followed with a couple of cold Freddo Frogs, a great way to end the day. 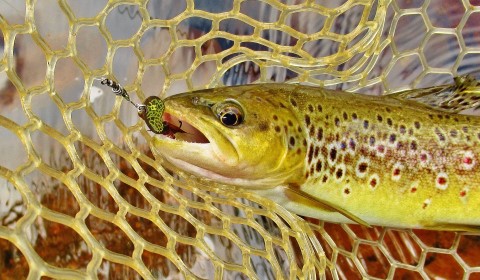 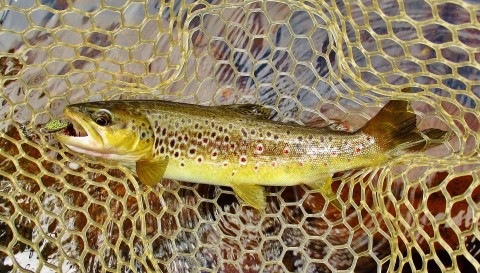 The best trout of the day 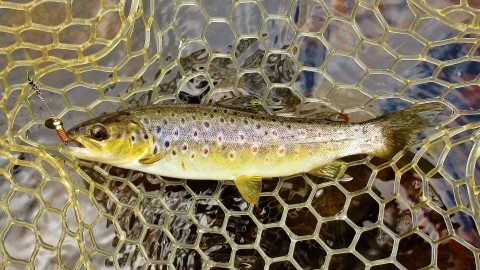 This plump brown fell to the Aglia gold spinner 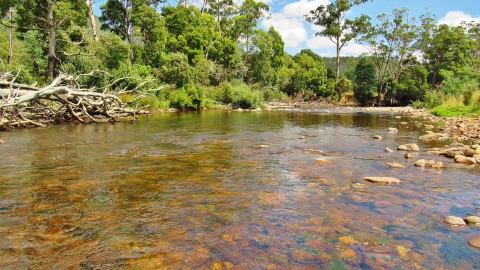 Once the sun hit the river the trout shut down 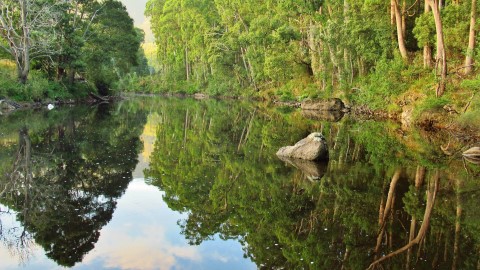 Reflections on the River Leven 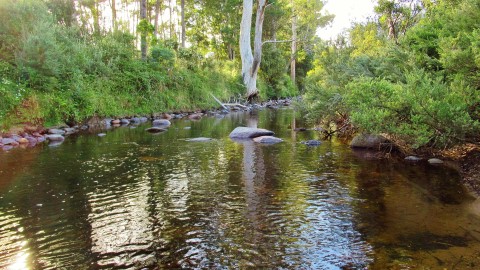 The first trout was caught here