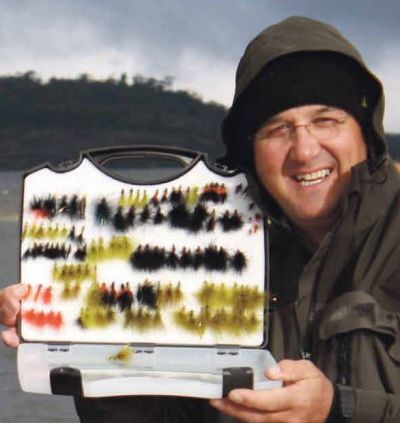 There’s lots of different anglers out there, lure bait and fly. There’s those who like to put a fish on the table, those who only catch and release. We all catch fish and we all need to be able to release a few or a lot of fish with as little harm as possible, so we can hopefully return and meet again one day.

As a group we are more aware of the need to conserve fish stocks and responsively harvest according to bag limits. Being a competition fly fishing angler, over the past decade I have seen catch rates amongst my peers soar, where once 3 fish would win a 3 hour session and a single fish in each of the 4 sessions would see you finish in the top 5. Now 6 fish a session is the norm and you need between 20 and 30 trout to win a competition.

Catching the bag limit is often reached and releasing fish is an every outing occurrence.

There is so much more information available to anglers including improvement in techniques and equipment, which is available to recreational and competition anglers alike and everyone has the ability to improve their overall catch rate. Bearing this in mind catch and release needs to be practiced where appropriate and knowing how to treat fish prior to release, minimising the harm caused in catching and handling prior to release is even more important. The use of barbless hooks is important in this process, either depressing barbs or purchasing factory made barbless hooks which will minimise the damage caused to a trout in capture.

I started competition fishing about the time my son was born in 1998. I had never fished with barbless hooks and had to depress my barbs before tying on a fly in competition. For a while every time I hooked a fish I would be panicking and if I lost a fish the air around me would turn blue and the expletives about #%\!ing barbless hooks would come out. It was easier to blame a barbless hook than to look at how I played a fish and work out what went wrong.

Also at this time buying barbless hooks was in itself no mean feat and involved either having to buy fine wire dry fly barbless hooks in a very limited range, hooks that were not suited to being tied as lures or nymphs for bigger fish so it was a case of getting the heavy hooks, depressing barbs and keep swearing every time I dropped a fish.

By this time though I had begun to travel overseas to compete. We were able to find a better range of barbless hooks, heavier gauge nymph and wet fly hooks and hooks with fine, curved points. The more fish that were caught on barbless hooks, the more comfortable I would become and the less I would blame barbless hooks when the occasional fish came off.

Analysing what was happening when a trout did come off, I also came to see that losing a fish is far more about one of two things, the initial hook up or playing the trout poorly.

Good hook set is important, to detect the take early and be able to set the hook on a trout in the tongue, top or bottom of the mouth will generally see the hook set into a fleshy area which holds well.

Being in good contact with the flies results in seeing the take as soon as it occurs means that the trout will have the fly deep in its mouth this means that a prompt reaction by the angler will ensure that the hook will set well. If you are fishing with too much slack line the take will not be detected until late and the setting of the hook will occur as the fly is about to be rejected and will either end up just hooked on the edge of the mouth or the hook will strike the boney areas of the mouth around the scissors of the jaw, neither of which are ideal. The same happens on windy rough days where controlling the line is a problem, you end up with undue slack in the line and leader making quick take detection hard causing the same problems.

Playing a trout with barbless hooks is really no different to how a trout should be played with barbed hooks, that is using smooth even pressure to control and direct the fish. The same principle applies to both lakes and rivers in general and when practiced results in far fewer fish being dropped.

Keep the trout in the water by avoiding pulling the trout to the surface. If you apply too much upward pressure the trout will either jump or roll on the surface, when a trout can flip or invert this can act as a lever and pull the hook free of the mouth. Having a trout splashing on the surface is the last thing you want to see, and is often the main explanation for fish being ‘dropped at the net’.

Try to keep the same amount of pressure on the trout at all times while playing the fish. There are times when you will have to put the brakes on a fish and increase pressure to keep it away from an obstacle or to turn the fish in the direction you want to go, but other than this keeping an even pressure will keep the fish from panicking and acting erratically when differing pressures are applied throughout the fight.

Make the fish turn back on itself. A trick I was shown a number of years ago while fly fishing for Northern bluefin tuna is to make the fish turn back on itself. Apply pressure directly back over the top of the fish rather than letting the fish move in an arc, this makes the fish actually stop and turn and tires the fish sooner as it gets a disrupted flow of water (thus oxygen) over the gills. Practicing these principles when fishing barbless hooks or in general will result in less fish being lost.

The move to sustainable fishing practices and competition requirements have seen more demand for barbless hooks and also shops stocking a suitable range. I prefer European brands like Hanak, Knapek and Dohiku. These are now readily available at good fly fishing shops. Check the brand and model to make sure they are heavy enough in gauge if you are fishing lures on lakes. For large flies I like the Knapek lake hook #6 or the Hanak H200 and for seriously heavy hooks the Hanak H900 in various sizes.

There’s a lot of plusses fishing barbless hooks if you care about your favourite fisheries. There is also the bonus that when you inevitably bury a hook in your own flesh, it will pull out cleanly, something I do all too regularly.