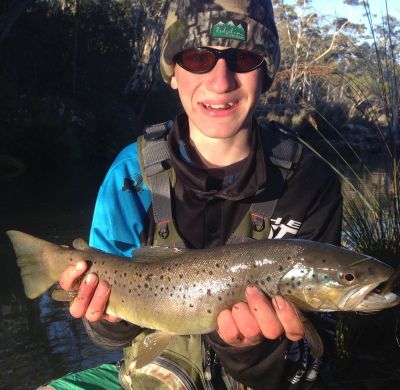 After rising at 6:00 am to go for a morning fish, all I could hear was wind and rain, but that didn’t stop me from going. I left at 7:00 am and walked to the lake. There was weed on top of the lake everywhere so it was making it hard to get casts in without getting weed on the lure. I fished for 2 hours more without a hit so I decided to head home for a warm up and some breakfast. But I wasn’t going to give up, so at 1:30 pm Samuel and I went for a fish at one of our favourite spots.

Time was going by with only seeing 1 fish and no hook ups, I was starting to doubt if I was going to get any until I saw a little shadow behind my lure. Next I felt a little tap so I striked and hooked a little brown 1.5 pound and 40cm long. I was happy because it was the first trout for the season.

Not long after I hooked that little trout, I was hooked up again for about 15 seconds, my reel just screamed but I lost it. I didn’t get to see the fish as it stayed down deep. I was a bit sad I lost it because it felt like a big fish, but that’s just fishing. Five minutes later Samuel yelled out to me and said “I’m on” so I look around the fish jumped and it was off. Samuel was a bit mad that he lost it.

About 10 minutes later I hooked another trout this one stayed deep for about 10 seconds and then came to the surface and was jumping like crazy! It was a good sized trout; it was too big to pull up through the weeds on 4 pound line, so I walked it down bank for about 15 meters and dragged it on to the spongy grass. It was a very nice fish it was 3.5 pound brown trout and it was 60cm long. Samuel took a few photos for me then I released her for another day for someone else to catch. I like to release most of my fish to live another day. At this stage Samuel was mad because I had caught 2 and he’s got none and was like it’s like last year again, now I was really starting to feel sorry for him.

He wanted to catch just 1 fish, so he started casting and 15 casts later he still hadn’t a fish. I gave him one of my lures that I was catching the fish on and on the 1st cast he lost it. He was angry. I told that it was no stress and to use my rod if he wants, He said “Nar, that’s ok you can have one more cast and we will go home”

I had my last cast and sure enough I hooked another trout. This trout was a nice 2.5 pound brown trout and 55cm long. I had to keep this buck trout because he was bleeding and I thought my old friend Wally around the corner would appreciate a nice fresh trout for tea, as he doesn’t get the chance to get out fishing much anymore. He was very happy to get it.

The lure the fish were all caught on yesterday was a Berkley Black ‘n’ Gold squidgy on a 1/16th jig head. 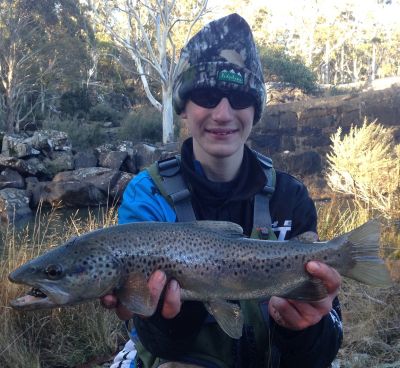