Here's my 2015/16 trout season report & stats.... This was the third best season that I've had since moving to Tasmania.. It was a pretty good season considering how dry it was here in Tassie, I reckon I did the right thing by concentrating on the two rivers that have a regulated environmental flow on them all throughout the year. They were the Mersey & Meander Rivers. The ** Dasher river which is close to home always fishes well early season and a day after a dose of 20 mms or more later in the season. The fish weren't over large this season as the rivers are still recovering from the dry seasons and the influx of cormorants we had three years ago. But they are on the way back which is good..

The river that was the most disappointing was the ** Leven River that only gave up 26 browns in the three trips to it. I know most trout fishermen would be happy to catch 26 trout in three trips, but I wasn't. The reason being was the amount of river that I had to travel over each trip to catch them. At least three times the distance of any of the other rivers that I fished during the season. It may improve by next season hopefully. I must admit, this river was one of the hardest rivers hit by the lack of seasonal rain as well as being one of the hardest hit with cormorants too. So perhaps I'm being a little harsh on this river. The trout were all in very good condition as well. I only had the one trip to the ** Wilmot River and that was early September when there was still a reasonable amount of water in it. It did fish fairly well giving up six medium size well conditioned browns. I had one trip to ** Western Creek and that was my first trip for the season on the 8th August, It was running high and fast which made the trout fishing very difficult.

One trip to the ** South Esk wasn't as good as I would have liked, but this was due to gale force South Easterly winds howling straight down the river. Sometimes it was just impossible to cast a line. I'm sure had the conditions been better the fishing would also have been very good too. The ** Mersey River fish very well as it dose most seasons even though the fishing was a little up and down at times. But that's the Mersey River for you, some days it's firing and others you just have to work that much harder to catch a trout. The fish in the Mersey were all of a reasonably decent size on most trips and very well conditioned fish. The river was mainly clear for most of the season, the river bottom was it's usual with slippery algae covered rocks. There is also a lot of silt built up along most sections of the river as well. The ** Meander River fished very well for most of the season though the fish were on the small side. Still this was a very good sign as it shows that this river has come back very well since the bad days of the cormorant influx on it. There are signs of silt and debris building up in most of the stretches of river that I fished too, hopefully it will get a good flush out over the closed season. This was the best river I fished through out the 2015/16 trout season, as tough as it is to fish the rocky river bottom it was rarely covered in algae.
This was my third best season that I have had since moving to Tasmania and one I'll remember for quite some time. I think it's mainly because I turned 70 this year and that I have managed 15 more trips than last season, caught 337 more trout, plus it's the most trips I've had since the 2009/10 season when I made 126 trips to the rivers for a total catch of 1256 trout.

Another brown that fell to the Mepps Meander River 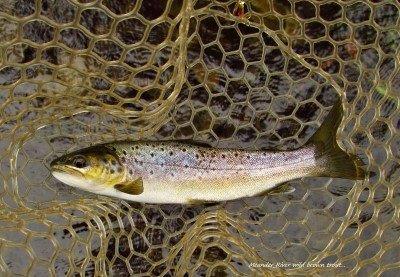 Autumn in full swing on the Mersey River 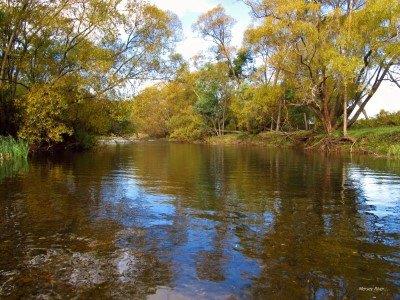 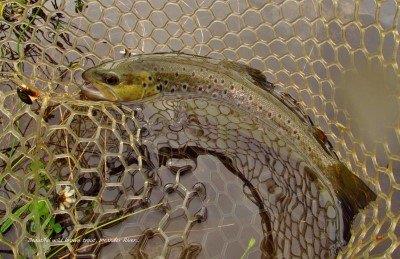 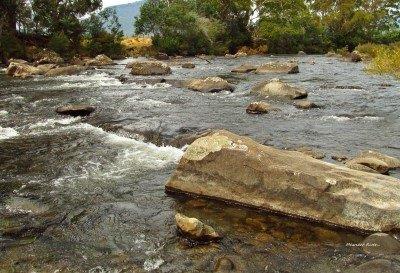 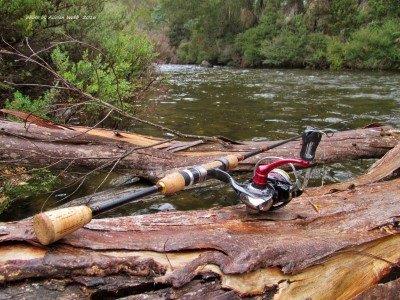