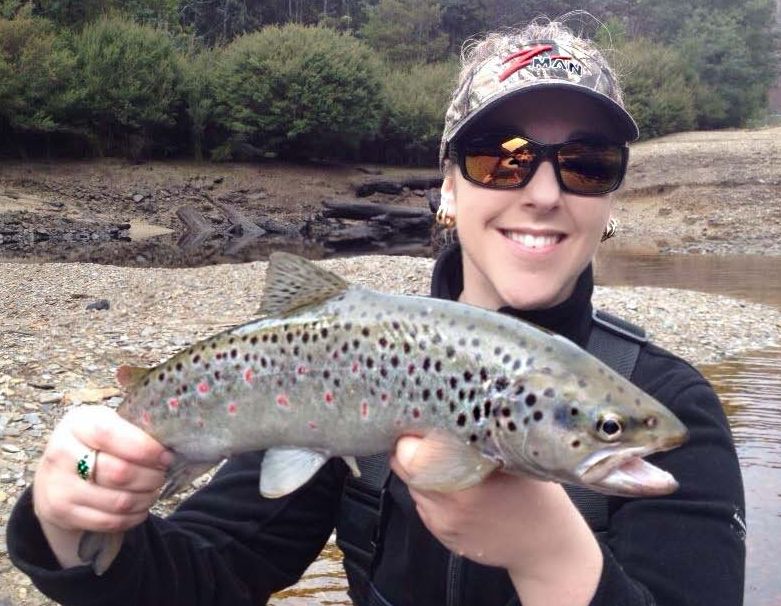 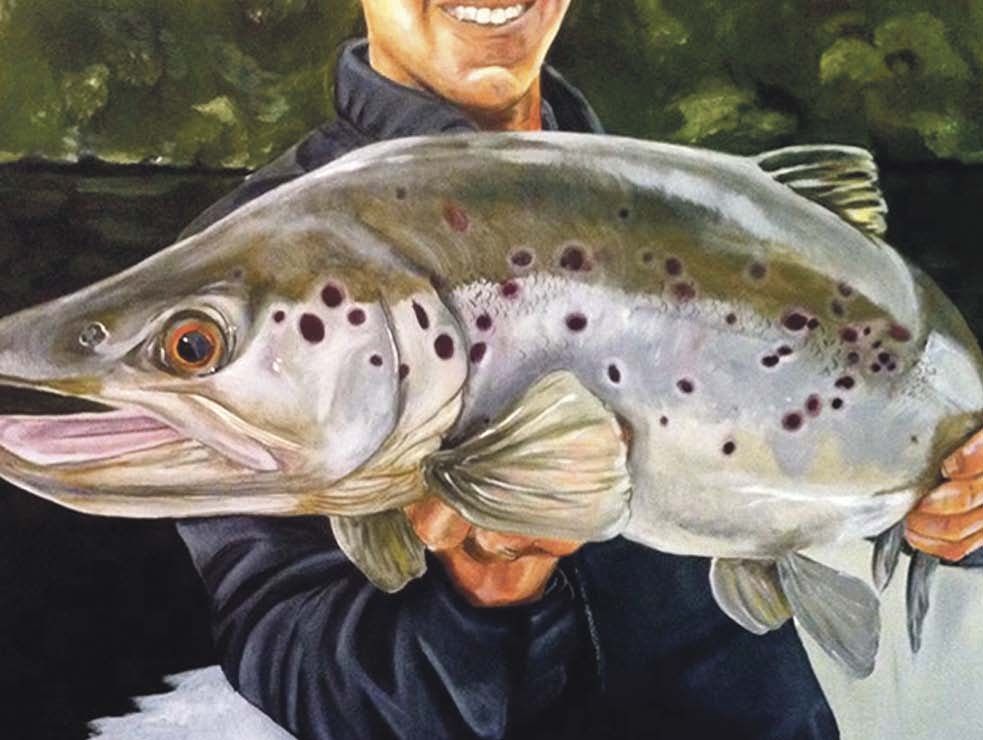 “Melbourne was realistically only ‘fun’ for the first two years because it had better shops than Burnie. The remaining three were spent trying to find the right excuse to move back without feeling like a failure! Then one day I realised ‘wow, I’m REALLY home sick’; so 4 years ago, the bags were packed, the Spirit of Tasmania was booked and back I came! I really missed Tassies beautiful scenery, fresh air, clean water and nice people.” Hannah picked up a paintbrush only a handful of times while living the city life.

On her return, she worked a ‘mind numbing’ advertising role for a local news paper. “One day I was banging my head on my desk so hard in utter boredom when a positions vacant ad come through for the job I am now in. It read “Are you Outdoors? Do you enjoy fishing? do you love people?” YES! YES! YES! I answered! So I applied, Charmed the pants off the interviewers, and a month later I had the job in the local Outdoor and Tackle Store! It was like a dream come true!”

Working for Rodney Howard at Tackleworld and Outdoors in Burnie really opened Hannah up to the world of fishing and the outdoors. It was through the shop that she met her now partner, Jamie Harris, one of Tasmania’s most prominent and respected fishermen. “Meeting Jamie has probably been one of the greatest things to happen to me. He has such a broad knowledge of all styles of fishing, and has shown me so many stretches of water, and so many beautiful parts of this state that make me feel so lucky to call this place home.”

Some would say Hannah has had an unfair advantage getting to fish with Jamie on such a regular basis. “I love trout fishing. It takes you to some of the most magical and beautiful places Tasmania has to offer. The exciting thing when trout fishing is that every single one you catch looks different. Different colours, different markings, different shapes. etc etc.” “One day, Jamie said ‘You should paint some fish?!” Pretty basic, but it was from that day, and that little bit of motivation that really started Hannah’s now recognised style.

Ranging in sizes as small as a box of chocolates, to as big as a table top, Hannah’s paintings are all on home stretched canvas’ using acrylics paints. “My favourite painting of all is a 12 and a half lb sea runner Jamie caught on a memorable trip to the Pieman together in 2012. The fish was so healthy, it had such gorgeous colours and was a real tank! It was a relatively easy picture to paint from; until I got to Jamie’s head- that was a bit of a challenge! But it must be OK, as its still in prime position on the lounge room wall. Haha!”

Over the last three years, Hannah’s style has grown from painting just trout, through to big tuna and many species in-between. Most of her pieces are commissioned and in 2013, Hannah was approached by a member from one of Tasmania’s Game Fishing clubs to paint a piece that was to be presented on their annual dinner night to commemorate a record breaking Albacore Tuna.

“I’ve done some pretty special commissioned paintings, but I was proud as punch and a little honoured to be asked to recreate this special moment. The Albacore Tuna for Clinton Howe was certainly one of my favourite, and most challenging pieces I’ve done, to date. As far as I’m aware the recipient was pretty chuffed, and has it hanging in his pool room!”

Other commissioned pieces range from trophy west coast sea runners, to memorials of people past, and also simple, colour and pattern capturing abstracts. When asked what it was she enjoyed about painting these scaly friends so much, she responded by sharing her love for vivid colour and pattern.

“Every single species has its own unique differences. I love recreating the earthy and technical tones and colours of trout, I love the scales and deep colours of estuary perch and bass, and the super sleek, streamline deep blues and silvery greys in tuna. The most enjoyable part is putting those finishing touches on the fish to really bring them to life; like the big hook jaw on those West coast bucks, the ‘wet look’ shine on big tuna, the golden bellies on highland trout. It’s rewarding standing back from a canvas and saying ‘Yep, this one’s done’, and it’s extremely rewarding seeing tears of joy from people’s eyes when they’re happy with what I’ve created for them.

It’s heart-warming and that’s what keeps me painting.” Amongst ups, there are also a few downs. Hannah explains how not every fish and photo is workable. “I’ve attempted a few jobs that’ve ended up with an angry fist through the canvas’, or a generous splattering of black ‘Mr. Squiggle style’ paint through a half done canvas, and some that after countless pointless swear words, just end up thrown in the corner of the studio for months and months.”

“It makes me happy to be able to mingle with fishermen through my job on a daily basis, and I enjoy spending a cold winters night in front of a canvas with a few glasses of rum, recreating a recent catch or someone else’s trophy… Each completed painting I feel i get a little bit better, and I hope to grow further as both an artist, and a fisherman in the years to come...”

You will find a tight collection of Hannah’s paintings currently on show and for sale at Gallery on Wilson, upstairs Watts Camera Centre on Wilson St in Burnie. Should you wish to contact Hannah paint for you, she can be contacted at Tackleworld and Outdoors Burnie, or alternately check out her Facebook and Instagram pages under Hannah Ledger Art.

Hannah - the Angler and Artist.