Drains on the Brain - Enrich your soul - Brendan Turriff

Presented from Issue 114, February 2015
It’s your day off work and you’ve been awaiting its arrival, pondering thoughts of blue-sky days, huge hatches and chubby trout. Reality closes in and as soon as you awake from your slumber, the cold front arrives before the coffee is even brewed. A quick trawl of Internet-weather forecasts worsens your enthusiasm – howling winds, occasional showers and plummeting temperatures. There are still options out there but would you be comfortable? Would you enjoy success? Should you stay at home constantly checking the social media feed to fill the void of your miserable woes? No, you should fish!

Tasmania boasts a diverse trout fishery, as you might know, renown for amazing sight-fishing on shallow lakes and historical mayfly rivers but in between all of this hides some little-known gems, smaller than a river and closer to being defined as a creek. A place where wading is optimistic only due to the lack of water, not its risky depth. These are creeks and rivers on a micro- scale and they are tight enough to tangle great numbers of your flies! These are positively enticing and there are hundreds of kilometres of them winding their way throughout Tasmania - enough for you to fish for the rest of your life, probably.

I like to call them drains, though that term lacks the romance they truly deserve. Decadent drains would be more apt. Technically, some are given the name ‘river’ or ‘creek’ but some of these allocations are open to interpretation! Whatever they are called, they allegedly hold water and if they have water, there’s a good chance they have trout.

Before you head off uninformed into the scrub – just hold the bus. If you are a trout angler looking for new water and you don’t use the Internet, you are doing it wrong! Google Earth has been fulfilling dreams for years and you should jump on board. In saying that, many anglers think that this is the only way to research satellite imagery and maps but sometimes, I find that Yahoo Maps and The List have better resolution in particular areas. With the latter option, it gives you the capability to select between topographical, 1:25,000 maps, satellite images or Google Earth so opens up a whole new perspective. The beauty of these tiny waters is that many of them exist beyond the boundaries of private property, enabling an easier means of access, either by car, foot or by mountain bike. It goes without saying however, that you obey any signage where applicable.

One of the more simple ways to assure success of finding a tiny trout water is to explore tributaries of larger rivers and streams, especially if these are known to hold trout. The only prevention to the upstream movement of trout is a significant barrier like larger waterfalls or man-made structures, like dams. Sometimes, you can find yourself fishing tributaries of tributaries and so the list goes on. Some of these waters are so small that they fail to get a mention in larger reference material like Greg French’s Trout Waters of Tasmania.

All the gear and some idea

To fish these waters, you are going to need some gear. For me, the only way to fish these waters is with a fly rod. You could get away with an ultra-light spin rod in some circumstances, but we’re talking of pretty small fish here so it goes without saying that some lures out there on the market could be half the size of these mini-munters!

It is probably best to explore this type of water with the smallest and lightest fly rod you have. Once you are addicted to ‘twig fishing’ you could explore a dedicated outfit. I use a 7’10” two-weight rod, though anything from a zero-weight to a four-weight could be a good option. The most common weighted rod in Tasmania is likely to be a five or six weight rod and these are just getting a bit carried away on these tiny waters. Emphasised by the fact that most of them are nine foot in length.

Leaders need to be similar in length to your rod, perhaps a touch longer. The main reason for this is to allow for an efficient bow-and-arrow cast when required. I say when because they will need to feature in your casting repertoire! Your leader should taper down to as much as 2-3lb. Any fish breaking this strain here is not a fish, it’s a tree.

Unless you’re a gear hoarder and camera enthusiast like me, less is more in terms of accessories and tackle. A minimalist approach is far less cumbersome. Some line, floatant, nippers, forceps and a handful of trusty flies in a vest or simple shoulder, hip or chest bag should be all you need. Many flies will do the job, though at this time of year you shouldn’t need anything but a dry fly. A size #16 Royal Wulff or Iron Blue Dun is a great start. Be sure to carry some grasshopper and beetle patterns too. If you are on a day mission with quite a task ahead of you, be sure to tell someone where you are headed, and take a small day pack with any food and water required, along with first aid kit and snake bandages. Organised crew these days also look at GPS, EPIRB and SPOT Messenger options, which are all great ideas for the wandering whisperer. 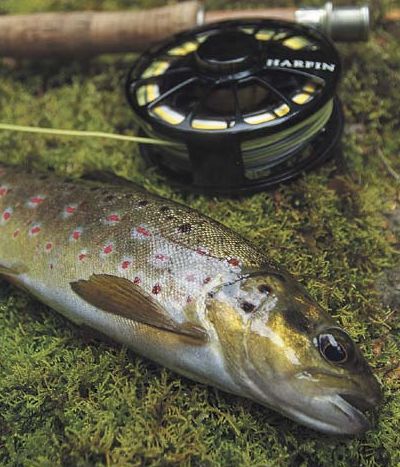 For the most part, standard fly-casting will see you through on these waters. On occasions, the need to move yourself to the left of the bank (for a right-hander) and lay your cast to the side will be of great benefit. Small roll-casts will also be of helpful in some tight runs with obstructions to your back. The bow-and-arrow cast also works wonders where you are left with limited casting options. Briefly, the basic aim is to have your entire leader out the end of your rod with maybe a few inches of fly line. Hold your fly by the bend of the hook, while aiming the butt of your rod forward at approximately 45 degrees. Pull back as far as your arm allows and let go, avoiding all humans and trees in the process! Give this a practice to experiment with the correct distance and presentation to allow a fish to gobble your offering.

Surprisingly, a number of these small waters become havens for trout seeking cooler water higher in the height of summer or when water levels become low and oxygen-depleted. Couple this with the fact that some hidden gems also become spawning grounds for trout later in the season and you have the recipe for a secret sauce. Keep it bottled, share with your mates and relish in its goodness!

Just because these fish are often small, it doesn’t mean they are easy. They require the same amount of stealth and approach as any other trout water. After all, they are by-and-large wild and wily brown trout. It is true that there are many other alternative waters that will give you a chance at a much bigger size of fish, but exploring the tiny options is not only satisfying, it will give you enormous scope when the weather caves-in, diversify your knowledge of our fishery and enrich your soul.