Very cold blustery conditions today and again tomorrow had me thinking there wouldn't be any trout fishing going on for me until around Thursday or Friday. At 1:30pm the wind was only blowing around 10 kph & the air temp was hitting 11 degrees so that was enough to get me off my backside, grab the fishing gear and head of to a small tannin water for a spin session. The large rivers were still running on the high side so really the small streams are my only alternative for now. No sooner had I hit the water at 2:00pm up came the wind, and it hit with force, very strong hard wind gusts that would have been in the 25-30 kph range.

The air temp dropped to 7 degrees in quick time and the wind chill made it feel like 4 degrees & not having a jumper on, it was cold. The water temp was back to two degrees since my last trip due to snow several days earlier, so it was going to be a tough cold session. The lure I used was the same as my previous trips here, it was the Mepps #1 Aglia Fluo inline blade spinner rainbow pattern. The water was running a couple of inches higher than the last trip as well, it was a nice medium tannin colour which was okay. With the water level being higher meant it was running faster and that will more than likely cut the catch rate down.

The first stretch of water fished was wide and knee deep, there I had four hits & two hook ups & missed every one of them. It was in the next short medium flowing run of water where I caught the first trout of the afternoon after a back hand cast into a small flat water close to the river bank. A small well conditioned little brown took the lure, a real aggressive attack which was good to see. It always amazes me what a relief it is to catch the first fish in a spin session, I don't know why that is, maybe it's because I don't like having a zero on the score card. After that I had a couple more hit and misses before picking up another brown, that too was taken the same way as the previous trout. The trout were very aggressive today and I was hoping they would continue to stay in that mood.

They did stay like that for the following twenty minutes when I caught & released three more from five hits & three hook ups. So in 1-1/4 hours of fishing in cold windy conditions I had picked up four browns which was more than I was expecting given that the water temp had dropped back to two degrees. Not only that my feet were freezing and I was really feeling the cold in the upper body now as the afternoon went on. I did think about calling it a day but there was still some nice water ahead of me that I just couldn't let go, I had to push on. In the end I should have called it a day because it took me forty minutes before a I caught trout number six. It was the best trout of the day too, sadly it had taken the lure deep down and was bleeding from the gills and couldn't be released.

I was within fifty meters to where the car was so I decided it was time to end the session at 4:25pm. I could get back to the car fast enough, get out of the waders and hop into a warm vehicle. The spin session wasn't all bad, actually it turned out much better than I had expected, with half a dozen trout taken in very cold water was probably as good as it gets. As cold as I was I still enjoyed the time spent in a small tannin stream. 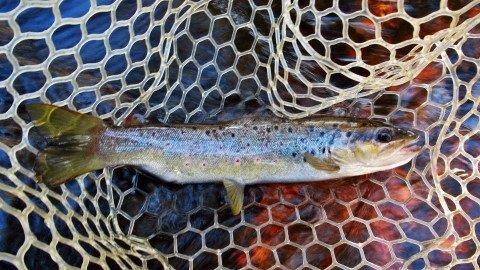 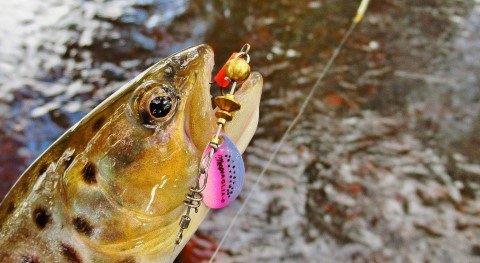 Aglia Fluo did the job here 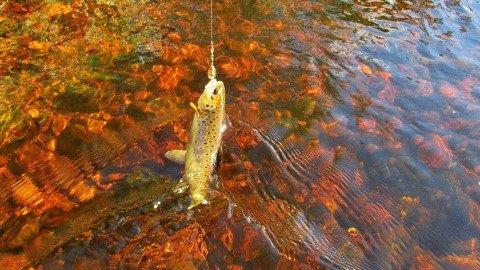 Another little fella falls to the Aglia Fluo