With poor weather forecast over the next few days I thought I would get one more trip into the tannin water before the change arrives, at the moment the conditions were perfect for trout fishing. I wasn't sure how much lower the water level had dropped in the small stream until I arrived (11:45am) to find it was very low and it was going to be quite a challenge chasing the trout. In low water levels the trout are very alert and will dart off with the slightest bit on movement, even when using a lightweight 1.5 gram Mepps spinner is enough to send them heading for cover.

The thing is that I do like a challenge and with it being an overcast afternoon that leaned a little to my advantage as most trout will be in open water. It wasn't until I was actually in the water when I realised just how low the water level was, not only that there was a fair amount of green cotton like algae covering the rocky bottom as well. Seeing this evened things up, it was certainly going to be a challenging spin session on the trout. This trip I was starting the session off using a #00 copper Black Fury spinner mainly because it had a narrower spin blade than the Aglia and I felt it was the better of the two to start with. A trout eyes are very light sensitive and with the Aglia having a larger spin blade I thought it may spook the trout more that attract them in the shallow light tannin water.

Not only that, the Black Fury has a black sticker with small yellow dots on it so there's less light reflecting off it but still enough copper colour to get the trout's attention. There's still several runs here that will be knee deep and I can use the Aglia in them if need be, and there's a strong possibility that will happen during the session. The first two small stretches of water there wasn't a sign of a trout, it was the following long run of water that gave up the first trout on the second cast. My first cast in it was directly up the center of it, on the retrieve in the shallow water the lure touched a rock here and there and became fouled with the green algae.

The water here varied from around 20cms down to 10cms which made it difficult when retrieving the little light weight spinner. I had to control the retrieve so the spinner wasn't breaking the surface and not too slow as to let it hit the algae covered rocky bottom. With the water being shallow in some areas and deeper in others was a challenge on it's own let alone catching a trout. My second cast was the perfect cast, the spinner landed exactly where I wanted it to hit he water, close to the right hand river bank. Two turns of the reel handle saw a bow wave appear in quick time and it was an instant hook up. I had the first trout of the session well and truly hooked and soon in the net.

It's amazing how much relief one gets when the first fish is caught, always gives the confidence a real boost. A little further up this same stretch of water I had another small brown take the spinner hard and fast, I had picked up two trout in three minutes, a great start to the spin session.. Not long after the release of the second trout I was onto another small brown but lost it as quick as it took the lure, just after that I had trout number three caught and released. Then it happened, the clouds dispersed and the sun broke through, the water was now in full sun something I didn't want at all.

This meant the trout would now move into shaded areas under low overhanging foliage and in the under cuts along the riverbanks. It's the water that's knee deep and deeper that will still be holding trout, the shallower runs aren't worth fishing now unless the cloud cover returns. I came to a narrow run of knee deep fast water that had a nice bubble line running down the river, it was here I picked up another trout, this little brown had three goes at the spinner before it finally took it. There was still some cloud around and every so often the water was in shade for a short time but nowhere long enough for my liking.

The following shallow stretch of water I hooked and lost a medium size trout, a change of lure was done, it was on with the copper Aglia. From that shallow fast water I moved into a long wide stretch of water that varied in depth from 60cms to 70cms deep, it was here I hooked and lost four trout in a row which ticked me right off, they were fast aggressive hits too but all missed taking the trebles. I came to a sharp bend in the river that was lined with plenty of foliage and large gumtrees, the river was in full shade here, it was mix of medium deep stretches of water which should have a trout or two in it.

I managed a few follows from trout in the first stretch of water but no takers, it was time for another lure change, I went for a #00 March Brown Bug spinner. The reason I went for the March Brown was because it was a nice medium brown colour, not too dark and not too light. The first cast back into the same water I had a brown dart out and take it, my choice of lure was spot on, quick photo and that little brown was back in the water. After climbing over a small log to get near the next short piece of water I noticed a small circle appear on the surface under some overhanging foliage, it was a trout surface feeding. Staying low I slowly moved a little closer then flicked the little bug spinner several feet ahead of where I last saw the trout feeding, then with a slow retrieve at the same time giving the Okuma Celilo Finesse 1-3kg trout rod a light twitch the trout took the spinner.

It wasn't a large trout, it was around the same size as the other five caught so far, in the 290 gram range. It was probably five minutes or so when I picked up another trout from a small shallow fast water run, trout number seven was caught. I was actually a little surprised that I had done so well on the trout given how the weather conditions had changed as the afternoon went on. The wind had picked up and was gusting up to 20kph which made accurate casting of the small light weight spinners a very difficult.

I slowly fished my way up the shaded side of the river without another sign of a fish when I came to another bend in the river that turned to the right, I was now back to fishing in full sunlight again. To make matters worse I was also facing the sun glare that was bouncing off the water, the gusting wind wasn't making it any easier either. I was fishing blind several times because of the sun glare and I did catch a tea tree as well as a dogwood tree a few times in my travel up the river from blind casting upstream. There were a few shaded areas on the river but the water was way to shallow to be holding trout any way.

I came to a shaded short fast water run, it was here I caught my eight trout of the spin session. It took another twenty minutes before I hooked another medium sized trout, this one was taken in a deep long stretch of shaded water, no trout were seen in the open water at all. I did have a few more follows from non aggressive trout while using the bug spinner before I went for another change of lure. This time it was a well used #00 copper Aglia Mouche Noire that went on the snap swivel.

It did take a while after hooking and losing a couple of small trout before I had the double figure on the scoreboard, my tenth trout was caught and released at 3:05pm. It had taken me just on two hours and forty five minutes to reach double figures, I fished on for another thirty minutes for one more trout from two hookups ending the day with eleven trout caught and released. I should have finished with twelve trout for the session, while holding the fish on the rod while trying to get the camera out to film it it made a few leaps from the water and tossed the spinner. Had I picked it up straight away or even slipped the net under it I would have had my highest catch for the season so far, I'm still stuck on eleven trout for a spin session.. Oh well, that's trout fishing... Good thing is I'm now only 44 trout away from reaching my 10,000th wild Tasmanian trout since moving to Tassie back in March 2000. 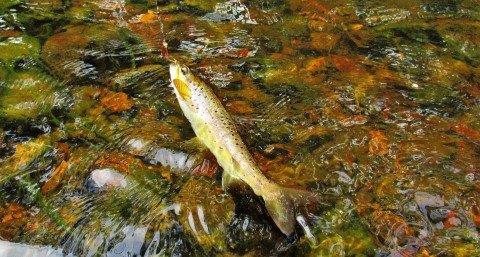 Another trout falls to the black fury spinner 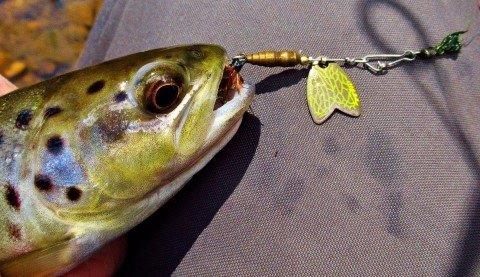 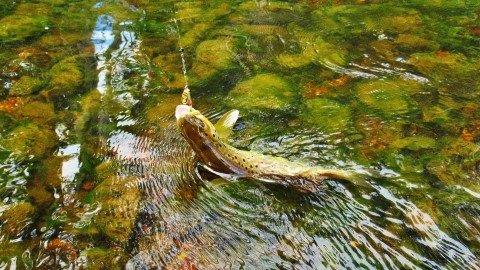 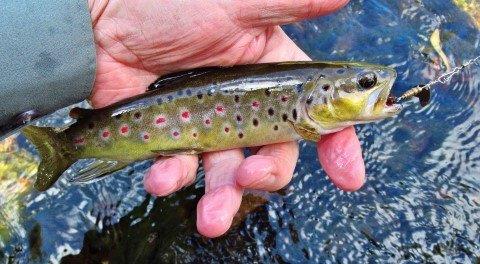 Small brown trout that fell to the Aglia bug spinner 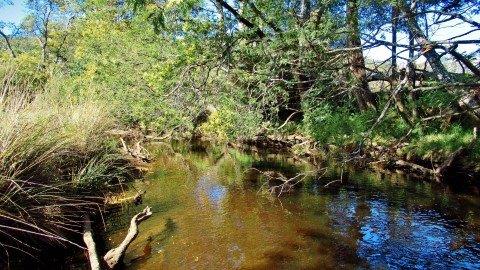 Tight water no room for error