The last two trips of August

Poor weather forecast again today and with the larger rivers still running high it was back to the small tannin streams for the next two days. The first trip was to my favourite one on private property, a small tannin water that really fished well last season, but for some reason it's been on the quiet side to date. The other small stream is also on private property and closer to home, this one has only given up the odd trout from time to time. It was 9:45 am by the time I hit the water in what was reasonable weather conditions given the forecast. Looking to the South West I could see there was a build up of dark clouds slowly moving my way so I had to get a move on as quick as I could. The water level was down to what it was a week ago, the flow was still good and the water was a light tannin colour. I started the session off with a small well used #00 gold Aglia Mouche Noire spinner, it's an oldie and a goody, it's also caught quite a lot of trout in it's time of use.

The first stretch of water I fished was one that normally gave up a few trout, but after twenty minutes of working my way up it I never saw a single fish. All I noticed was a small bow wave ahead of me from a trout that darted off as I moved into another shallow run, I could feel it was going to be one of those non productive days in this tannin stream. This time last season this little stream had given up eighteen trout in four trips during August, so far in five trips here this season it hasn't given up a single fish. I know the weather hasn't been all that flash during August, all I've managed so far has been a couple of light hits and misses.

Even with the very low water temperatures I still should have come across some trout, I'm hoping the drought may be broken today providing the weather holds off long enough. Well the weather didn't hold off for all that long, light rain started and continued on and off for around thirty minutes before it stopped, that's when I caught the first trout of the morning. After spotting a small ripple close to the left river bank near some reeds some twenty meters ahead of me, I flicked the little gold Aglia a meter or so ahead of it, on the retrieve a small brown took it. It was fish on (10:20am) at last, this little tannin stream has finally given up a fish, as small as it was; it was still the first trout caught here for the season.

No sooner had I released that fish the rain arrived again causing me to bypass a couple of shallow stretches of water before hopping back in and continuing on with the fishing. It was forty minutes after the release of that little brown before I had another take on the gold Aglia Mouche Noire, another small trout that tossed the spinner as fast as it took it. The rain started to get a little heavier, the wind arrived and that was enough for me to call it day. With just the one small 240 gram trout caught and released wasn't what I'd call a good spin session at all, it was nice to at least break the drought though. I'm sure this tannin stream will come good soon enough, I just have to be patient that's all..

With the weather being a little better than yesterday although the air was much cooler (5.7degrees), I decided to have one more trout session before the end of the month. It was a late afternoon start in the river on private property close to home, I was in the river by 2:45 pm and the lure of choice for starters was the #0 Aglia fluo (micro pigment) rainbow spinner. The very same spinner that I used on my last trip to this little river, the only difference is I'm fishing one and a half kilometres further upstream than my last trip here. The river was running a little lower plus there was quite a bit of green algae on the rocky river bottom which I thought may foul up the 2.5 gram spinner seeing as it will run deeper than the smaller 1.5 gram spinners. The stretch of river I'm fishing is around a kilometre long and has a good mix of shallow fast flowing water plus some wide medium flowing water that varies from 15cms to 40cms in depth, I still started the session with the Aglia Fluo.

After using it for fifteen minutes or so I found it was too heavy for the shallow fast water runs, it was bottom bouncing and becoming fouled with green algae. I had to go for the lighter spinner, I changed to a small #00 gold Aglia spinner, another good little all round lure that has done well here before. This little river has been the one that's given up the odd trout on my previous trips to it, I'm hoping it will give up a few more this afternoon as well. The change to the smaller lightweight spinner was a good one, there was no more bottom bouncing in the shallow runs, not only that it only took a few minutes before I had my first take on it. A very aggressive take it was too, like most of the trout in this little river it was only a little trout. Like I keep saying, it's always a relief to catch and land the first fish, even if it is a small one.

This little brown was pretty skinny too and wasn't all that well conditioned like they normally are. With the water temperatures being so low for a long time may be taking its toll on the smaller trout due to the lack of food over the Winter. Once the air warms up there will be masses of insect hatchings and the trout will soon put on condition and fatten up. After fishing my way upstream through some beautiful looking trout waters without a sign of a trout. Thirty five minutes had passed when I had my second hook up, one leap from the river and it was gone. With the trout being far and few between there's nothing worse than hooking and losing them. I still had some nice trout water ahead of me, it would be nice to catch a couple more before I reached the area where the car is parked. It was bad enough losing that trout, to make matters worse the wind picked up and was blowing straight down the river, that caused a massive wind knot in my line during a long cast up the river. It was easier to cut the knotted line and remove the line than sit there trying to untangle it. The one thing I always do is never toss the removed line away, I roll it around my fingers then put the line in my waders top pocket and take it home.

I have often found a lot of disused tangled lines dumped next to rivers, I never leave it there either, always pick it up and take it home to bin it. Small birds, Platypus and animals can easily become entangled in it and they will eventually die, so never toss any line away, whether it be freshwater or saltwater fishing take it home with you. It wasn't all that long before I was back to fishing a few more good looking stretches of water, still no signs of a trout. I was within fifty meters from the car when I caught the second small trout of the session, this little brown was deformed behind it's dorsal fin. It, like the previous trout caught was also on the thin side, it was healthy enough though, it just needed a good feed. Once released I hopped out of the river and headed back to the car, my day was done, just one and a half hours for the three hook ups and two small browns landed, another dismal spin session in a small stream. August ended with just a dozen trout caught and released, well down for the same time last season with twenty seven trout caught and released. 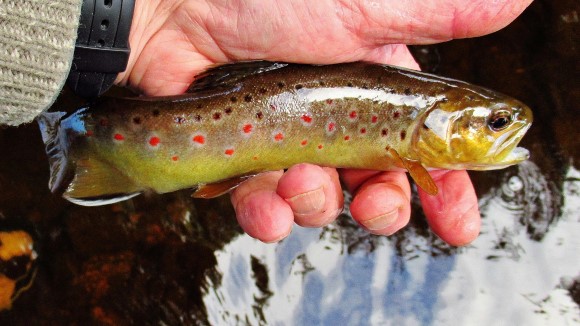 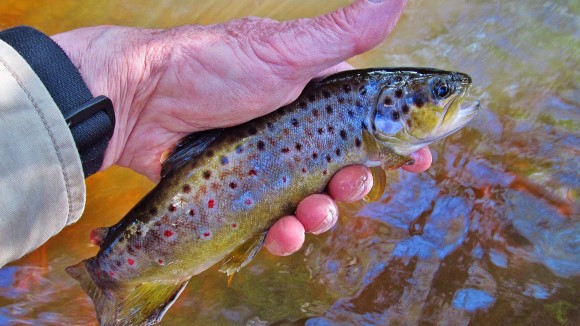 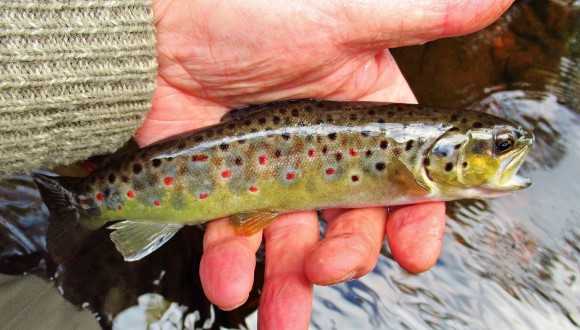 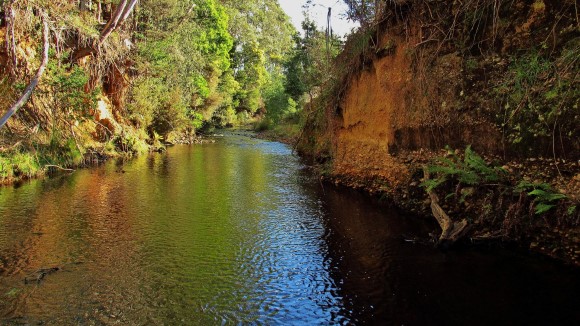 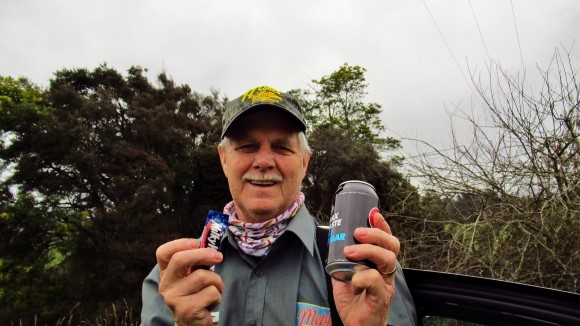 End the day with a Pepsi Max and a Milky Way