The Bug and small stream trout

Rain and windy conditions were the forecast of the day again today so I had planned to stay home, then as the day went on the weather wasn't all that bad so I headed off for a spin session in the tannin waters. It was 1:30pm when I finally hopped in the water and started flicking a small #00 White Miller Bug spinner around in the tannin stream. The flow was pretty good due to recent rain and the water was a little cloudy but still had that nice tannin colour to it, that's the reason I went with the White Miller spinner. This time I'm fishing approx one kilometre of water and one that has quite a few log jams on it, also one that hasn't given up a trout in two previous trips let alone see one. Several days ago I caught seven trout two kilometres downstream from here and that's why I want to give this area a go today, I feel there may be a few trout here now.

It only took a few casts in the first stretch of water when I had a trout come out of nowhere and had a go at the Bug spinner, it missed being hooked. That was a good sign seeing a trout here so early into the spin session, it gave me hope there may be a few around today. As I moved into the next slow flowing stretch of water I spooked a small trout that had been sitting in shallow water near the river bank that gave me a lift and I knew I would be onto a trout sooner than later. Just ahead of me was a nice wide run of flat water that had an old log three quarters of the way across it, that's where I saw a small circle appear on the surface just ahead of it. I was sure it was from a trout sipping something from the surface, but with a small wagtail darting around there as well I thought it could also have dropped something. I needed to get as close as possible to the fallen log without creating a bow wave, I was in stealth mode as I got as close as possible to the fallen log so I could get a decent cast into the area I felt the trout was in. Once I felt I was close enough without disturbing the water and spooking the trout I then had to do a low backhand cast to avoid hitting the overhanging foliage near the river bank on my right. I had to get the backhand cast right the first time, if I muffed it, the trout that I'm hoping is there will dart off. I concentrated on the spot where I needed to lob the spinner for a short time before letting the little White Miller go with the cast, it landed within ten centimetres of the river back, a perfect cast. No sooner had I started to retrieve the spinner when a bow wave appeared behind it, I was right, there was a trout here after all. As it drew closer to the lure I gave the Okuma Finesse rod a light twitch to make the spinner blade flutter, that was enough to get the trout to take it. Once hooked it made a couple of runs towards some debris but I managed to turn it before it could reach it, all I could say was “please stay on.” It did stay on and soon tired, I was quite relieved once I had it in the net, it's always good to land the first fish. That trout was a nice length but it was very thin in the body which I feel may have been from late spawning due to low rainfall during June & July, it will fatten up once the weather gets warmer and insect life appears in big numbers. I had a few more cast & retrieves in this wide shallow slow flowing water and had a follow from a small non aggressive brown. The following run was also a nice wide slow water, nothing happened there, the next stretch of water the result was much better. This narrow stretch of water was faster flowing, it had a nice piece of flat water on the left hand side that had a bubble line next to it, the perfect spot for a trout. I was pretty confident of picking a fish up there because I had caught trout in this same spot on past trips last season. The first cast to the top end of the flat water was all it took to catch the second trout of the session, this fish was bigger than the first one. Once hooked it headed straight into the faster flowing water and made several leaps and runs before I had it in close enough to lead in into the net. This trout was in excellent condition and full of fight as it played up in the landing net, it weighed 440 grams, two trout landed in seven minutes was a great start to the spin session. With plenty of good trout water ahead of me I'm hoping to catch a few more trout before the rain arrives that was forecast for later in the day. There were a lot of very dark clouds overhead, the rain wasn't all that far away, I needed to push on a little quicker than I normally do when fishing rivers and streams. After having a few hits and misses as I fished my way upstream it took thirty five minutes to catch and release trout number three, a small/medium beautifully coloured brown. A little further upstream and ten minutes later I was onto another trout but lost it just after turning on my camera. After the loss of that trout I fished my way up a long narrow run of medium flowing water where I had a couple of hits & misses. Once at the top end of that run I had to contend with a log jam, once over it I was back into some nice open water. There I caught two a couple of small browns in fifteen minutes, they were the last of the trout caught for the rest of the spin session. I had fished on for another fifty minutes and climbed over a few more log jams for two hits & misses before I called it a day. At the start of the session when I caught two trout in quick time I thought I was going to be in for a good tally of trout but it wasn't to be. The good thing that came from it was the fact the trout were moving back into this area for the first time this season, something to look forward to in the coming months ahead. 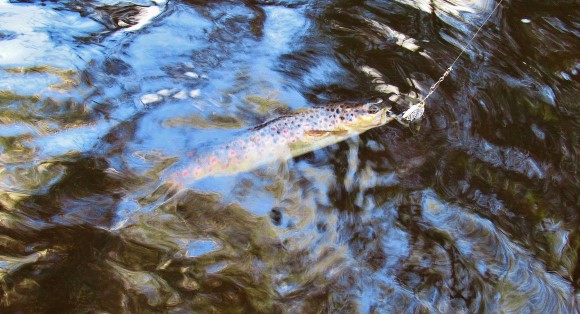 A tannin water wild brown trout falls to the Bug 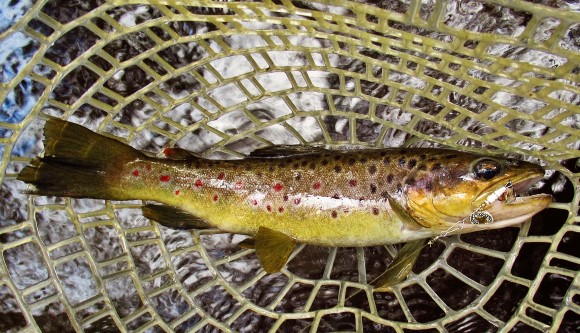 Best trout of the spin session 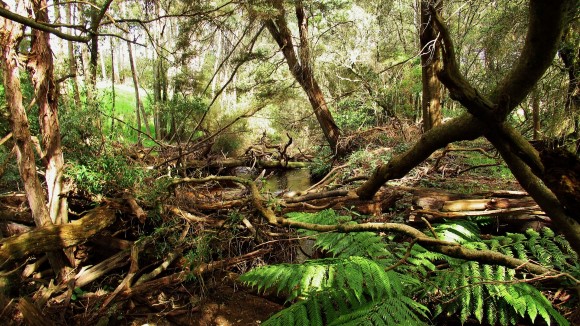 Large logs jams there are plenty in these tannin streams 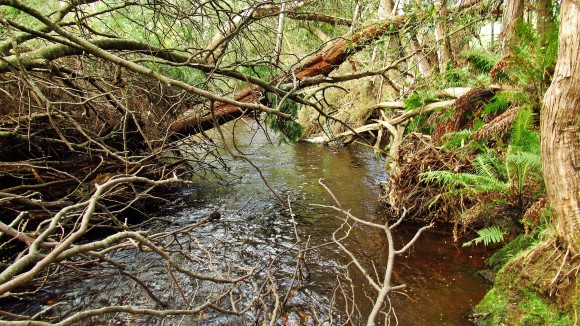 Never easy in these out of the way streams 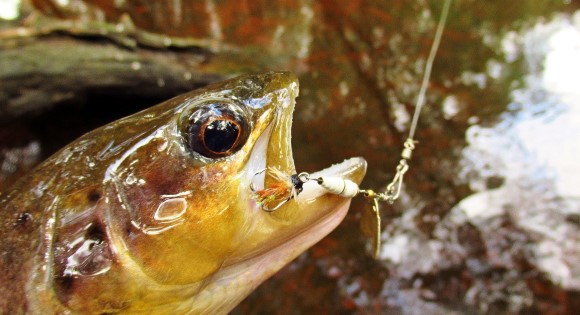 The Bug gets the first of the day 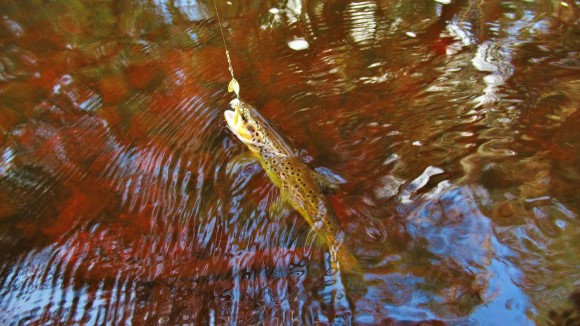