Spring is nearly over and as we head into what looks like being another long hot summer. I believe this season holds an anticipation amongst Tasmanian anglers not seen for quite a while thanks in large to renewed water levels in many of our impoundments due to better than average Autumn and early Spring rainfall.

Being part of a large fishing club like Longford brings with it many benefits, not the least of which is being privy to the many reports of how our fisheries are performing within our large membership base as fellow fisho’s bring forth reports of recent success or failure.

Up to mid November these reports have been mixed. For example lowland waters like Four Springs have gone quiet after an initial onslaught of success by our members. Those heading up to Arthurs and Great Lake, although rewarded with fish, are often disappointed in their overall quality and size for this time of year. That said, although the majority of fish are small, there seems to be plenty of them.

As the days get both longer and warmer there is also renewed hope for waters such as Tooms Lake and Lake Leake and it is perhaps a case of ‘when’ rather than ‘if’ these waters will fire this season.

My first couple of trips to Lake Leake this season have found the water still a bit discoloured  and the fish quality with a way to go, but that being said, on our most recent outing, myself and fly fishing guru John Dekkers found ourselves on the water just as daylight broke, the fish caught in that session were a lot better and a quick check of their stomach contents showed them gorged full of stick caddis, flying inchmen and midge, so based on that, the condition factor shouldn’t be a problem  for too much longer one would think.

Woods Lake at the time of writing this article is fishing superbly with one of our Longford Fishing Club members reporting recently that nearly everyone coming off the water seemed to have fish in good condition. Perhaps it is just reward for those braving the continually deteriorating road into it.

At the moment, whether it is stripping wets, casting plastics, trolling or bait, you have a great chance of being rewarded handsomely for your efforts.

With early Spring comes the stirring to life in the insect world, trout that have spent recent months shovelling around newly flooded ground or hanging deep in the weed beds feeding on scud and snail, start to look skyward for the inevitable early morning midge hatches and in the case of our lowland waters, the first of the mayfly nymphs.

As I have touched on being on the water at daylight to witness the continued bobbing up and down of a brownie locked in a feeding pattern can bring with it memories that last a lifetime. Waters such as Tooms Lake and Lake Leake in their prime used to virtually guarantee this event every calm balmy morning. If the waters mentioned above do get back to that this season, I believe both myself and many others will be out of bed well before daylight on a regular basis.

Sometimes you only get half an hour to experience this before the sun rises above the horizon putting them down, but an efficient fly caster in the right place at the right time could well take his or her bag limit such is the experience.

Indeed often it was a case of ‘which fish to cast to first’ and with the process of  methodical brownies so workmanlike, it was just a matter of putting your fly out in front and waiting for it to be consumed as the next in line. 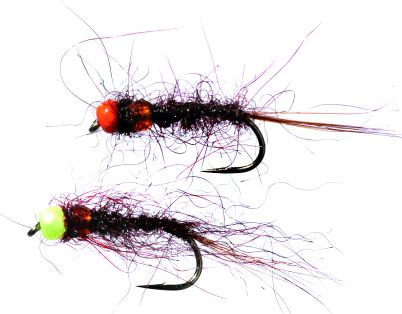 Up at Arthurs, the stonefly hatch can be the first real dry fly action of the season and although sub-surface activity is still moving slowly and perhaps not visible, a bead headed nymph fished under an indicator fly such as a Red Tag or large caddis/stonefly imitation can often surprise.

I like the bead on the nymph to be a fluorescent yellow in colour this time of year. Trout may even take it as a stick caddis, I don’t know, nor do I really care, as long as that indicator fly sinks and there is weight on the end when I strike.

Fishing this technique in the last weeks of December and early January onwards with the nymph a foot or so off the bottom can be some of the best fishing you will experience all season, the trick is not to take your eye off the indicator fly, you can guarantee the moment you do, the indicator will dip and the chance will be lost as the fish inhales your offering—and just as quickly spits it back out.

A drogue is essential and one of the Hayes Super Drogues for about $120 (get the float kit as well) are the best. Slowing the boat’s drift over weed beds in around two metres of water seems is the most productive formula.

When the water is like glass, a long line cast blindly and just left lying in ambush of a searching fish often puts fish in the boat on the so called ‘dog days’ that plague us all at times. Of course you still need to pick your spots. Try areas that you have found productive in the past.

Much has been written on this form of fishing and people better qualified than I offer great advice to the novice such as drifting down the side of the wind lane with your boat useing long casts etc etc.

I find that quite often the fish aren’t that obvious and it is quite easy to drive on thinking that they are not there, once again an indicator and a nymph fished mid water and to the side of the slick will often surprise.

I guess the hardest thing about this type of fishing if you haven’t done a lot of it, is having the ability to see the fish in these conditions, the spotting of a snout bobbing up and down in the ripple, or the tell tale sign as water ripples nervously, are skills that can only be developed through time on the water and gaining experience in this type of fishing.

In case you hadn’t sensed my passion for this—I just love it!

Whilst I have concentrated on fly fishing in this article, it is not a form of fishing that I am locked into. I go fishing to catch fish and if nothing is working, I will pull out a lure or soft plastic as quick as a flash.

A 3 gram jig head fished with a Yep Red Rascal or Gulp Pumpkinseed can be absolutely deadly—especially if fished around submerged timber.

Recently, Jim Mckenna (a fellow club member) and my daughter enjoyed polaroiding hungry browns in the entrance to Cramps Bay, Great Lake. It blew us all away as we watched fish no further than a rod length come back numerous times before inhaling the jigged offering. The fish seemed oblivious to a boat and its three excited passengers yelling “he’s got it, no he hasn’t. Drop it back down. Yeeesss!” Fair dinkum, we were like kids fishing off a jetty for tiddlers.

This all happened at 9 in the morning, the session yielding 10 fish in no time at all.

Since we started using soft plastics as part of our armoury , the results speak for themselves on a regular basis.

My time, as with most people, is precious, and I like to give both myself, my friends and my children as many opportunities as I can throughout a session in order to achieve results .

Constantly moving, looking and changing techniques will go a long way towards improving your catch rate, believe me. 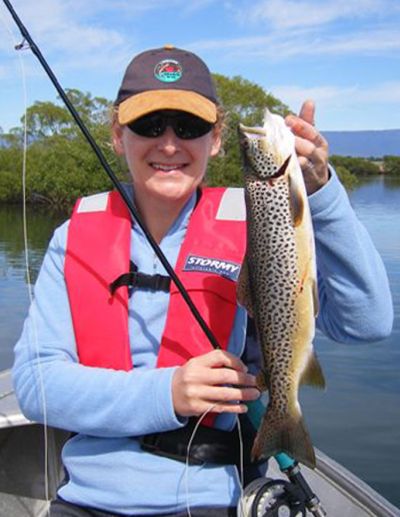 At the end of the day, sometimes we win sometimes we lose when catching bags of fish, but trout fishing, in all its forms is great fun, no matter how you approach it, especially in the summer time.